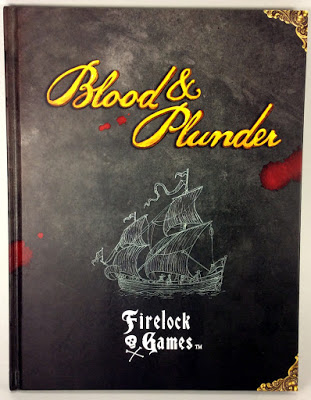 Blood & Plunder is one of the prettiest games that I have ever played. When I first encountered it at a Convention, I fell in love with the look of the game. After reaching out to the company that makes the game, Firelock Games sent me a Rulebook and Starter Bundle for review. This post is a review of the rulebook.

Right off the top, I can tell you that this is a very well presented game and someone took a lot of time to make sure that the rulebook really looks nice. There are lots of pictures, diagrams and well written text in this well laid out book.

How to play the game has already been well covered by Firelock Games and Beasts of War. For those interested Firelock Games has video tutorials on their website. Because of the presence of these resources, I am going to focus more on my thoughts of the book and game rather than the mechanics of play.

As stated earlier, this book (like the game) is pretty. It has high production values and looks great. I found the historical overview interesting, even though I am the type of guy that likes to skip over “fluff.” I actually found myself learning about the history of the Caribbean and thinking “this is neat.”

While the book is pretty, I noticed right away that the unit cards featured throughout the book were not available to the public when I first started reading the book. These cards (pictured below) were a part of the original Kickstarter and were not available at the retail level. That said, there is currently a new Kickstarter Campaign that these cards are available through again. Time will tell on whether this becomes an item that they actually stock at the retail level.

Regardless of the situation with the cards, the cards are not actually needed to play the game. Everything needed is in this book (including stats).

The rules themselves are not overly complex, which I like. Unit cohesion is achieved by keeping models in a unit within a 4″ diameter circle, or in the case of a building or ship, by keeping the unit in the same section. Because of this stipulation, parts of the game feel abstract and a buddy asked if one could use counters for crew on a ship rather than models. To be honest, one could do this, but one could actually do this with pretty much any miniatures game. I once proxied a Pop Can as a Monstrous Creature in a well known Sci-Fi game. It works for a game between friends, but it also severely diminishing the aesthetics of the game. So yes, one could proxy or come up with an abstract solution to count models, but it just wouldn’t look as pretty as using the miniatures on the actual ships.

For me, it is the imagery of crews on these beautiful ships that draws me to this game. This book is full of those very images. These images help capture the imagination and make you want to play this game.

The rules of the games are broken down into what can be thought of as three sections, each building on the last. The first section tells players all of the rules that are needed to play land battles. The second section builds on the first and adds basic land structures and artillery. The third section adds the ships. By playing a game at the end of each of these sections, players better learn how to play the game by reinforcing each building step. Of course, I like to jump full-on into the deep end when I learn a game, but I plan to follow the recommendations in the book of playing land battles first, followed by land battles with structures second, and finally by games with the actual ships.

In the rules, ships are considered moving “structures.” This means that once you learn how to deal with structures and cannons in land battles, you just have to add rules for movement and ship interactions to know how to use the ships.

It should be noted that the game is a d10 system and there are five possible scenarios to play in this book. The neat thing about these five scenarios though is that each scenario outlines how it works in a Land Battle, an Amphibious Battle (one force is land based and the other ship based), and a Sea Battle. This breakdown changes the 5 possible scenarios into 15 straight out of the core rulebook. There are also roughly four pages dedicated to giving suggestions to players on how to create their own scenarios and possible optional rules.

200 points is considered a “standard” game. The recommended table size for a standard game is 3′ by 3′ for land battles and 3′ by 4′ for battles that involve ships. If a ship might sail off the table, it is recommended that players “scroll” the terrain and ships along the gaming table. Ships are not allowed to leave the map.

Overall, I really liked this book. It is well laid-out, the rules are fairly simple and it is one of the prettiest games that I have ever seen. The game itself is fun and I am happy that I got to try it out at Broadsword 3. I personally am really looking forward to obtaining my second force through the “No Peace Beyond the Lines” Kickstarter and playing this game on my own gaming tables.

The one criticism that I do have of the book is that it features several pages with unit cards that were not available outside of the original Kickstarter. That said, those cards are not necessary to play the game, and they are currently available through the newest Kickstarter.

For those interested, Blood & Plunder is now available on the Wargame Vault as a PDF at an affordable price. If you purchase Blood & Plunder from one of the links on this site, a portion of the sale goes to helping support Must Contain Minis.

Have you looked at Wargames Atlantic Sci-Fi Miniatures?

The Walking Dead: All Out War – Battle Report and First Impressions