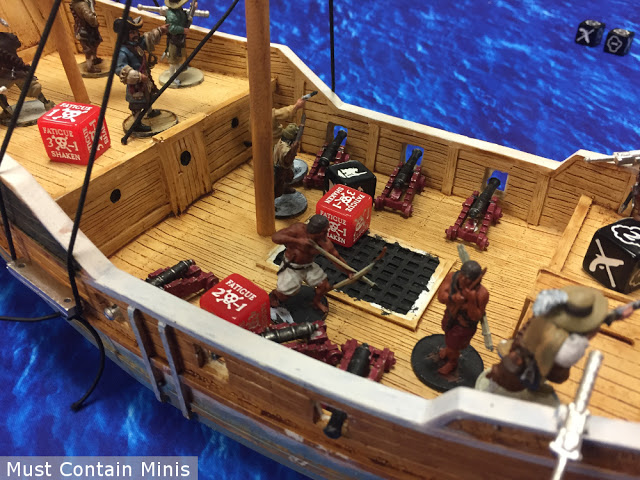 One of the things that I absolutely love doing is going to conventions. There I can try out new games and check out awesome tables. The most recent one that I went to was Broadsword 4 in Hamilton, Ontario (August 26, 2017). This post is my report of that convention.

There were many games at the event. The prettiest by far was Blood & Plunder. There is just something about 28mm tall ships on a 6′ by 4′ seaboard that is so appealing. Plus, look at those gorgeous ships and miniatures!!!

The guys putting on this game did a fantastic job painting.

I didn’t participate in this game, I caught the very end of the battle and boy was it interesting!

The darker ship appears to be in the superior position, but check this out! In a last act of desperation, the lighter coloured ship rammed the darker one into an island.

I am not 100% certain, but I think this is where the game ended. The superior ship stuck on an island with the other ship sailing away.

Aside from Blood & Plunder, there were plenty of other games played at this event. A small sampling of those tables is below.

At this event, I played The Others, by CMON, Conan, by Monolith, and I ran my own game of Frostgrave, by Osprey Games. My friends Dave and Randall also ran a fantastic game of Bolt Action. The links above will take you to the associated Battle Reports.

In addition to the games, two vendors attended the event. Six Squared Studios and Crucible Crush both had booths. One of the many games Crucible Crush was selling, was Flint and Feather.

Just like the last events, I had a great time at Broad Sword 4 and would recommend the event to anyone. Feel free to check out my previous posts about Broadsword 2 and Broadsword 3.

For those local to Ontario (Canada), or a short drive from it, there are two October gaming conventions that might be of interest to you. The first is Council Fires in Brantford (October 20 and 21) and the other is Skycon in Kitchener (October 28 and 29).

Check out my Convention Report of Council Fires 2017 to see what last year’s event was like.

Skycon is a general gaming event with many tournaments and events going on. It is brand new this year.

I hope that everyone enjoyed this Convention Report.