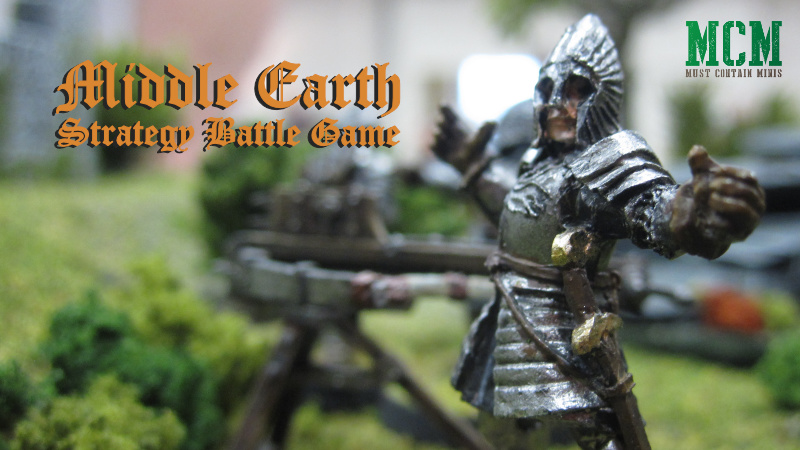 Before getting into it, I want to say that this report was a long time in the making. This game actually took place last March at Hotlead 2019. These pictures have been sitting in my “to write about” folder for a long time. Unfortunately Hotlead 2020 could not run this year due to concerns about COVID-19, but I figured I would use this opportunity to clear up some of my backlog in posts.

With all of that out of the way, let’s get into the Battle Report.

Being a convention game with 6 plus players, this game was huge!!! Each player controlled a handful of miniatures. The table was set up with sides and players would naturally gravitate towards one-on-one battles before swinging around and helping out the other people in the same army.

Getting in on the Battle

With the rules explained and our objectives set, we started the battle. Immediately my group clashed with the Ringwraith™ flying on a Fell Beast.

After the defeat of the Ringwraith™ the enemy reinforcements clash into my lines.

Tactics Tip… If you are going to split your forces be careful how you do it. Two waves of head-on-attacks by my opponent did not work well for him. It would have worked better for them if they held back the Ringwraith™ for a better coordinated attack.

The Rest of the Battle

My battle was but a small part of the overall battle happening simultaneously on this Middle-Earth Strategy Battle Game table at Hotlead 2019. At this point I was able to refocus and catch up with what happened on the left flank and center of the table. Let’s take a look at that action.

I don’t remember which force won. I know I defeated my enemy and captured the objective on my side of the battle. Whether we won on the rest of the table, I am unsure. I believe that my forces controlled two of the objective markers at the end of the game. I don’t remember how many there were in total.

So who won? I guess everyone who had fun, which was presumably everyone at the table. Overall, it was a lot of fun to play this demo game and I enjoyed the experience.

And check out that table!!! Doesn’t it look awesome?! That is one of the nice things about gaming at conventions. You get to try new games with minis that aren’t yours. Often, the people who run these games put a lot of effort into their tables and miniatures. This table certainly has a wow factor!!!

If you were in attendance at Hotlead 2019 and remember the outcome of this game, please let us know in the comments below.

Games Workshop does not get a lot of coverage on this site. That said, I really enjoyed this game and the people that ran the table did a really good job. I enjoyed the experience and the battlefield looks absolutely awesome!!!

Unfortunately, Hotlead 2020 could not run this year due to concerns about COVID-19. Despite this, be sure to watch for Hotlead 2021. This event has always been great and I did miss it this year. Their biggest draws are numerous participation games and a huge bring-and-buy table.

Also, I think it is worth linking to the awesome Lord of the Ring and The Hobbit gaming tables on Must Contain Minis. Check out these awesome Middle-Earth Strategy Battle Game tables from Hotlead 2018 and 2019. These gaming tables are absolutely stunning and well worth a look!!!

Must Contain Minis draws in some income from affilate sales at DriveThruRPG and Amazon. If you buy from those places from here, then a portion of the sales goes to helping to support Must Contain Minis, at no additional cost to you. For all those who do, my thanks goes out to you. You help pay for the servers and web-hosting fees to keep this site going.