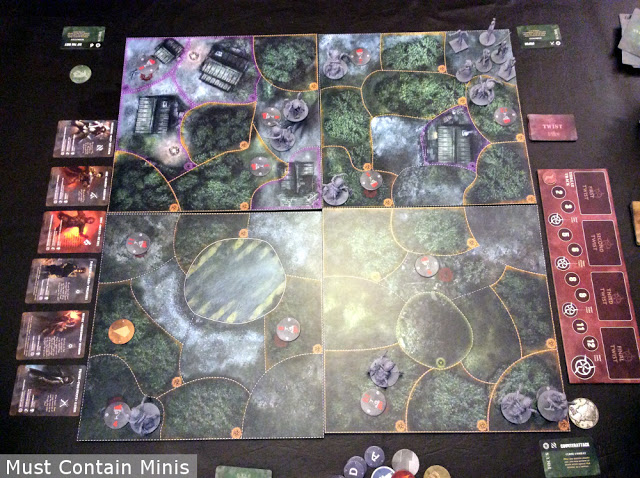 Today’s post focuses on our first play through of Fireteam Zero and discusses our first impressions of the game. If you don’t know what Fireteam Zero is, it is a 1 to 4 player co-operative miniatures board game where the heroes play the role of an elite force of World War 2 Soldiers that deal with the Occult and Paranormal.

Special thanks goes out to Emergent Games for sending Must Contain Minis a Review Copy of the game.

For this article, we played through Act 1 of Typhon’s Children. Our primary mission was to find Ferry Fuel and an Engine Propeller so we could take a ferry across a river and continue our mission. This mission is part one of a three part campaign to destroy some alters and a take out a giant monster.

Above is the board as it started. There are 12 tokens spread around the board. These tokens represent enemy spawning points and areas that the players must search to find the propeller and fuel. To match our four players, nine enemies were randomly placed on the table at spawning points.

I played as Rat, the close combat specialist. We also had Sarge (the leader), Sonny (the demolitions and medical specialist), and Two Penny (the sharpshooter) in our group. This game is fully cooperative, so no one had to play as the Overlord (a concept I love as I almost always play the Overlord – it is nice to play as a player from time to time).

In addition to the player characters, the game also gives you two specialists that act as NPCs who follow your characters around and provide them with bonuses. As a group, we decided to give Rat the first turn. He immediately moved into the enemy’s space and took down the animal with his knives.

In the picture below, you can see that we split up the party to try and get to as many spawn points as possible simultaneously. Strategically, this is not be the best move in Fireteam Zero.

The players continued to push forward with a layered approach in hopes to cover more land and deactivate more spawning points.

The monsters in this game never stop. Every time you kill them, they come back at a different spawning point at the end of the turn. You can’t win by just killing the enemies. Killing the enemies is part of what we were trying to do to win this game.

And that is how our game ended.

Thematically, this game hits a lot of spots that I really like. It is World War 2, Contains Minis, and involves the Occult. The mechanics are simple and easy to grasp (once you understand them). But our first impression after playing it is that Fireteam Zero is brutally hard. That said, our strategy was wrong.

We should have kept our characters together more instead of fanning them out to separate spaces. When the players are in the same space, they can take advantage of a rule called “Taking One for the Team.” This rule allows heroes in the same space to take the attack meant for another player. This allows the players to take the attacks on the stronger heroes, which reduces the likelihood of a character being “knocked down” during the enemies’ turn. Keeping the players together would also let them better utilize their reaction cards, which would have helped as well.

We also found that most of the search cards on the spawn points contained bad events for the characters. We should have had two or three characters on the same space for when those bad events occurred. There is safety in numbers. In fact, if we had another character with us in the space with token number 5, Rat would have been able to get up from under the shelf and help Sonny in the fight. Instead, Rat was pinned and we didn’t have anyone to get him back up again.

I think if we kept the players together better, we may have even squeaked out a victory.


The other criticism that I would like to make is that we found the rulebook a little too concise. To learn how to play, we resorted to the “Learn to Play Fireteam Zero Video” (embedded below). We had troubles understanding the game through just the rulebook. The most likely reasons are because the game uses concepts and mechanisms different from other games in the genre and because the video to teach you to play is 26 minutes long, but they managed to condense all of that 26 minutes of material into 9 printed pages. We would rather that they spent longer explaining the rules in the book and printed more diagrams and images illustrating how to play the game.

That said, the video below does a good job of explaining how to set up and play the game and once you get going, all of the mechanics are fairly simple. Personally, I don’t mind simple games at all. They are easier to teach to others and often get on the table more often than complex games.

Overall, we enjoyed the game but wish we didn’t get our butts handed to us so hard. That said, I am sure we will do better next time by keeping the players together.

If you are interested in FireTeam Zero, they are now running a Kickstarter for a second printing of the game. Be sure to check out the link below for more information on that campaign.

Disclosure: Emergent Games sent Must Contain Minis a Review Copy of Fireteam Zero and two of the expansions.