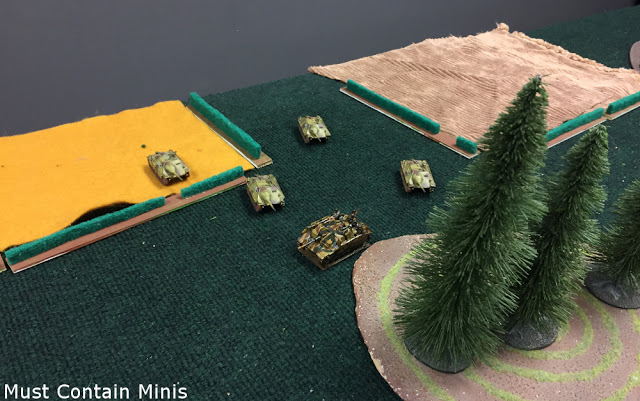 The scenario was Dust Up. In this mission, both sides set up diagonally from each other with delayed reserves. Each side also has two objectives and the first side to capture and hold the enemy’s objective wins. Below is a picture of the table before deployment. Jacob took the bottom-right as his starting position while Kevin set up on the upper-left side.

Kevin brought an Infantry Company of Pioneers with Hummels, 88s and Hertzers as support. Jacob brought Jagdpanthers, StuGs, Wirbelwinds and Grenadiers (with Panzerfausts and Weapons Teams).
For deployment, Jacob had two platoons on the table while Kevin had three. Below are pictures of how the two sides set up.

Jacob would start the game with the first turn.

Until the third turn, both sides would remain fairly static. The Hummels would try to range in on Jacob’s Grenadiers, but continuously missed. The StuGs would whittle down Kevin’s infantry very slowly while Kevin’s 88s would fire at one of the StuGs (on the left hand side) to no effect.

On turn three, Jacob expected Kevin to bring on Infantry platoons as his reserves so he double-timed his commander forward. His idea was to press the attack forward into Kevin’s side of the table while his infantry would hold down the objectives.

Jacob had forgotten that Kevin had four Hertzers in reserve. Kevin brought them out for an easy kill. Oops!
Kevin’s Grenadiers push hard on the objective and Jacob’s forces are pushed back.

Unfortunately for Jacob, this is the end of the game. With no Commander and two of the three platoons on the table eliminated, his forces flee the battle. Even if they could stay, his Grenadiers force would never have been able to push back onto their objective. Kevin won this match 6-1.

The most disappointing thing about this game was not getting my Jagdpanthers onto the table. What a lot of points to leave parked at home!!!

Keven completely outplayed me. That said, Kevin was a very friendly and polite opponent. I couldn’t have asked for a better experience of getting back into Flames of War.