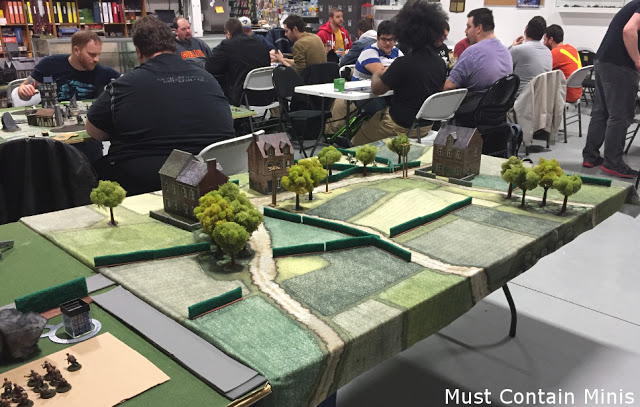 Recently I got another game of Bolt Action in at one of my favourite Friendly Local Gaming Stores. This place is always happening and check out the table that we were able to set up using Terrain owned by the Store, my buddy Dave and Must Contain Minis. This table is absolutely gorgeous!
Being that an odd number of players showed up, we decided upon a three player game. Must Contain Minis would play the British with Dave and Aaron running the Germans. Points would be set at 1000 points and the German players could split that value however they wished and run as either a single platoon or as two. They opted for two. Below is what the British brought to the table.
The Germans brought the following two platoons.
For the Mission, we rolled Hold Until Revealed with the British Attacking. The Objective was placed on the hill in middle of the table and the Germans elected to have their two smaller platoons on the table defending that objective.

It is not looking good for the Germans at this point. Below is how the rest of the Platoons ended this final turn. Although a mistake was made with the Assault Dice, it was not a game changing mistake. This was the final turn of the game. The Germans would not have been able to move back on the objective in time for the end of the battle.

What a fantastic game!!! Bolt Action is fun on its own, but playing on a stunning table makes the experience even better! For those wondering, the mat is by Cigar Battle Box, the trees were home-made by Dave with a 3D printer and some foliage materials, the cows are also 3D printed and the houses are made by PlastCraft Games. To make the seamless hill where the objective is, we placed a hill under the mat. Special thanks goes out on my side to Cigar Box Battle for supplying Must Contain Minis with this beautiful gaming mat and to Forbes Hobbies for providing us with the gaming space with permission to take photos in their store. Forbes also supplied the PlastCraft Games houses and some other terrain pieces.

I hope everyone enjoyed this Battle Report. There certainly is a lot of eye candy here!  🙂

What Armies Can You Play in Lion Rampant?