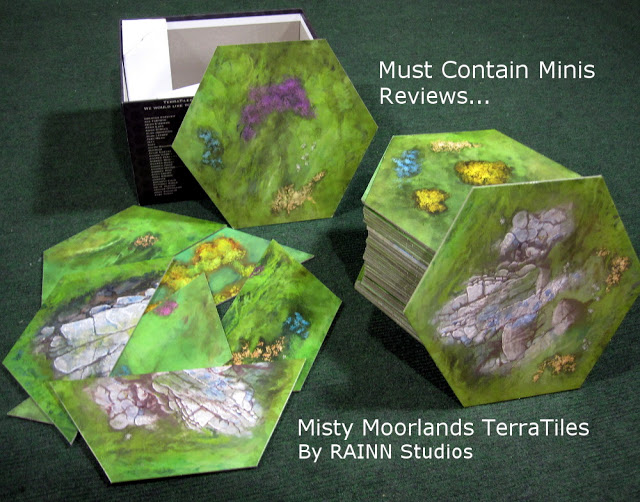 A while ago, RAINN Studios sent me their entire collection of TerraTiles to review. Some of my readers will recognize the products because Must Contain Minis has already written a quick initial thoughts article about the product line and a product by another company has been showcased on the tiles. In this post, Must Contain Minis is going to take a much closer look at the Misty Moorlands TerraTile set. Be sure to read to the end of the article for some real eye-candy!

The first thing to note is that this box is heavy and there is a lot in there. To give an idea of exactly how much is in there, take a look at these 15mm and 28mm against the stack of tiles that comes in a box.
The tiles themselves are double sided and can be configured in a vast array of possibilities.

So how do these look when assembled on the table? To see, I set up some action scenes in my home studio.

A small criticism that can be made about these tiles is that there is a bit of a sheen that can be seen in some of the pictures. I have photographed Boardgames in the same area with the same lighting, and I can tell you that these tiles combat the reflection better than most boardgames. The tiles themselves are actually fairly Matte.
To give the reader a sense of how much light is hitting those tiles, Must Contain Minis now uses three 100W lamps (with roughly 1,600 Lumens each). Only two of which have diffusers. Over time, I want to upgrade my lamps and cameras, but that is a story for another post. Back to the story of the TerraTiles. Considering the amount of light hitting the tiles, they are doing fairly well with not reflecting light back to the camera.
Now that we have seen the product with 15mm, Flames of War Miniatures, let’s look at it with 28mm Bolt Action Models.
As one can see, these tiles are certainly usable as 2D terrain. If one wants a different set up, rearrange the tiles and flip some over (they are two-sided after all). While these tiles work as 2D terrain, they work even better when 3D terrain is used with them. The brighter colours of the tiles really makes scenery and miniatures ‘pop’ off the board. Below is a picture of a ruined XOLK structure placed on top of a Misty Moorlands tabletop.

Now comes the eye-candy that I promised my readers. To get the reactions of others, I took the terrain system to Phoenix Games in Kitchener (Ontario, Canada). Bill Kocher, the store’s owner, allowed me to take pictures in the store and also allowed me to use his models. Bill is a much better painter than I am and if anyone is interested, he does commission work too. Let’s take a look at what I was able to do while I was at Phoenix Games.

Overall, I like the product. I think that these TerraTiles offer some real advantages to the people that use them. At the same time, there some criticisms.
It is fairly easy to think of this Terrain System as a 2D gaming surface for miniature wargaming. When people first saw it sitting out on the table, they did not think to add scenery. Once scenery goes onto the tiles, the terrain system really pops and stands out as something special. Another criticism that I heard is that people were worried that the tiles would move around during play. I found this not the case. The tiles are heavy enough to stay in place on their own during normal play. They were even better at staying in place when 3D terrain was placed on top. One way that the tiles did not stand up to moving around was when someone placed a rule book on top of the tiles and accidentally moved the book. At that point, a section of tiles moved and I had to reset them.
In comparison to wargame mats, these tiles offer a much better variety in the number of gaming boards that can be constructed. That said, it takes longer to set up the tiles and light reflects off of them a little more than it reflects off gaming mats. What I like most about the tiles is how much they make miniatures and terrain pieces ‘pop’ off the gaming table. In many ways, it is nicer than playing on a carpeted or static grass table. The reason I requested these tiles from RAINN Studios is because of their adaptability. One can easily alter the set up of the table without having to buy an all new gaming mat when using this system.
As stated earlier, this terrain system really comes into its own element when coupled with 3D terrain. If one already has terrain, then they are set to make some fine looking tables. If one doesn’t, RAINN Studios has a solution for that. They also sell a 3D Battle Pack.
I hope that everyone enjoyed this Review of the Misty Moorland TerraTile set by RAINN Studios.

It will be a while from now, but the next up in the RAINN Studios library scheduled to be reviewed on Must Contain Minis is their 3D Battle Pack. 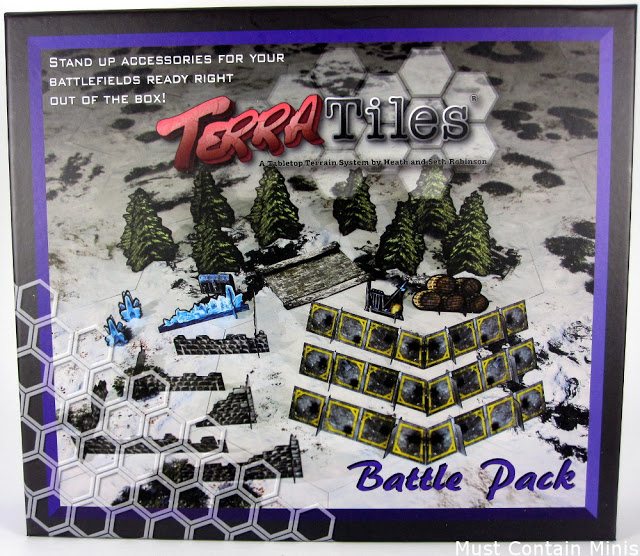 Runewars Battle Report in a Wasteland