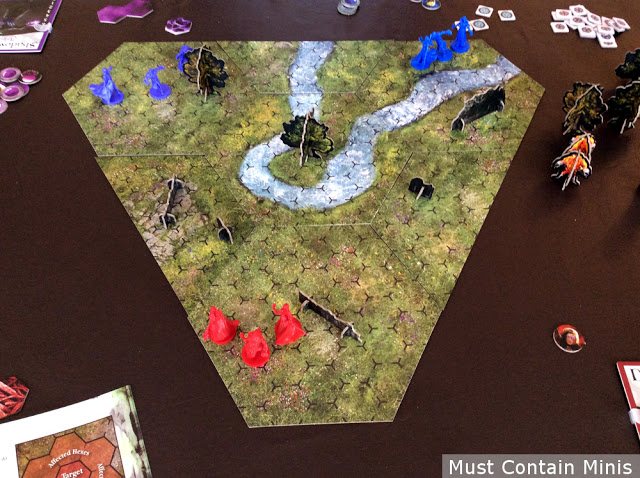 Recently I played Incantris for the first time and my first impression is simply, “Wow!!!!”

In this post, we take a look at my first session and initial thoughts of the game Incantris. Special thanks goes out to Heath of RAINN Studios for sending me a review copy of the game.

Setting up and learning Incantris was extremely easy. This is what I would consider a fun and simple game that is acceptable for people that love light miniatures games and non-gamers alike.

For our first game, we played the three-player Battle Royal scenario.

Some keen eyed readers may recognize the tiles. Yes, those are TerraTiles with a Hexagonal grid superimposed. We reviewed a number of TerraTiles products in the past and like them for wargaming. They are also super nice for this board game. If you want to see my past reviews for TerraTiles, check out… the Misty Moorlands, the Tundras and Wastelands and the Battle Pack.

In this game, I played as the Red Team. On my side, I had a Druid (good at slowing down enemies and healing team mates), Shaman (good at close combat and moving others around the board), and Sorceress (a master of elemental spells). Below is a picture of my character cards.

The cards above detail how many hit points each Wizard has, what spells they can cast and what defence levels they have versus different magic types.

To sort out attacks, the game is very simple. Roll the number dice your character has for said spell. Any “plus” number are bonus automatic hits. Then look at the dice you rolled. Each “wand” rolled scores a hit. Then look at your wizard type. That is the type of attack you made. The Shaman makes Spiritual Attacks. Now look at the enemy that you hit. On the bottom of the card are the characters defences. If you are the Sorceress, you have 1 die to roll to defend against Spiritual attacks. Roll the die and count up the number of “wards” that you rolled. The remaining number is how many hits you take.

The dice have one more “wand” than “ward” on them so the game favours the attacker.

The story is simple. Two countries, locked in war, grew tired and leery of the battle and decided to resolve their war through a tournament. At this tournament, their top champions would battle it out, and whichever country wins the tournament, wins the war.

Before this tournament is to take place, the kingdoms hold their own tournaments to determine which champions to send to the tournament to end the war. Our wizards were battling for that honour.

Surprisingly, all three of the players engaged each other equally in this game. There is always a risk in a game like this that one side will wait out the others to battle it out and then mop up the winning force. This did not happen in this battle. We focused on each enemy equally.

Now let’s jump into the action part way through the game.

The Red Team’s Sorcerer (me) cast Flame Dart on the Blue Team right off the top and summoned a Guardian Hydra near the Purple Team on turn two. The Guardian Hydra gets to shoot a free Flame Dart each time the Sorceress that cast it activates.

The Purple Team rushed their Shadow Weaver forward to engage the Red Team, moved their Shaman to take on the Blue Team and the Sorceress set fires through out the board with a spell called Blaze (more about that spell below). The Shadow Weaver is fast and the only model that can move, attack and move again. The Shaman is strong in close combat and the Sorceress casts elemental spells.

The Purple Team then engaged the Red Team’s Shaman at close range with their Shadow Weaver. This would prove to be a bad, but not deadly, move.

The Shaman hit the Shadow Weaver hard. Amazingly, neither player is ganging up on the other. This battle has been, and will remain, a true free-for-all.

We decided to let the Purple Player have two Blaze fire makers on the table. Blaze is a fire effect that causes damage to any character that moves through it or ends their turn in the fire marker. Generally, there is just one spell effect maker per faction, but because neither of us had blaze, we had no issue with her casting the spell twice. She chose to cast the second Blaze spell on my side of the table.

Blue chose to cast Fog in front of the Red team Shaman. Fog is a two hex barrier that blocks line of sight and the movement of other teams, but not of your own.

One can see that there is a lot of strategy to the game. The strategic and tactical decisions grow as the board populates with spell effects.

The Purple team then casts a spell that allows it to trace the Sorceress’s line of sight from either the Sorceress or from a giant statue token holding an Orb.

As the game went, each team damaged the others’ wizards and strategically healed their wizards too.

Eventually, some of the wizards succumbed to their wounds. The first casualty was the Purple Shadow Weaver – a victim of an extremely powerful close quarters attack from the Red Shaman.

The next casualty was the Blue Arcane Knight. To cause this one, the Purple Shaman reached out with a ranged attack and pulled the Arcane Knight into the middle of the fire. The Knight survived the attack, but could not withstand the flames of the fire. The players around the table hoot and hollered, but everyone thought that the fact that you can set up an attack like this in the game is extremely cool!

The next casualty would be the Purple Sorceress – taken out by the Red Shaman. At this point we were thinking that the Shamans were perhaps too powerful, but truth be told, we were just using them well. The Wizards all seem fairly well balanced.

The game continued, but it was basically just the Red team mopping up the other two groups. Ultimately, Red won the battle.

Overall, my impression of Incantris is extremely positive. It comes in a nice little box, its components are beautiful and the gaming tiles are actually of the same quality as the Terra Tiles that I reviewed earlier (they just have hexes superimposed on them for the board game).

Balance-wise, the game is very nice. Each team has three wizards, each from a different school of magic (Astral, Spiritual and Elemental). There is definitely a Rock / Paper / Scissors game going on here with the three types of wizards and their defence values. On top of the Rock / Paper / Scissors, there are plenty of spells to cast – many even have ongoing effects on the gaming board. Very cool!

Based on the above Battle Report, one might think that the Shaman is overpowered, but he is not. We were just using them well. The Purple player figured out the synergies between her wizards early and the Red Player better utilized the Rock / Paper / Scissors approach to spell casting and character defence. Overall, the Wizards and all teams seemed balanced even though they were asymmetrical in their Sorceress Spells and secondary wizards.

The game plays fast and was a lot of fun. Of our group, two players were miniatures gamers and one was not. Even the player that was not a dedicated miniatures fan wanted to play this game again. Likewise, I took this game out to a different gaming group and, there, I was the only one of four heavily into miniatures. All three of the others also enjoyed this game.

Difficulty wise, this is an easy game. If you are looking for something super deep and crunchy, this is not be the right product for you. There is strategy here and you can consider your moves deeply, but the play itself is quick and easy. In all honesty, it might even replace Memoir ’44 for me as my preferred gateway game to get non-gamers and board game players interested in Miniatures Games.

Hopefully everyone enjoyed this quick play-through and review of Incantris. Special thanks goes out again to RAINN Studios for providing Must Contain Minis with a review copy of the game.

Disclosure: RAINN Studios provided Must Contain Minis with a Review Copy of Incantris.