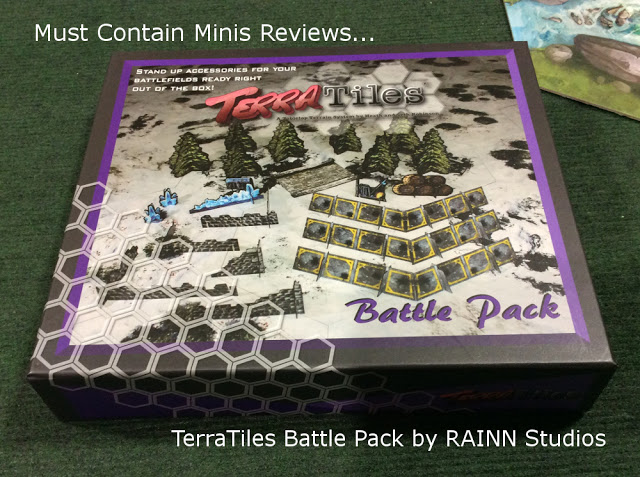 So what is in the box?

Price-wise, this boxed set comes in at $19 American. Not a bad price at all. This should make it appealing to budget gamers that don’t already own Terrain. Also, look at how slim the case is. This makes this product a nice addition to miniature collectors that are low on space but want a solution for Terrain.

Let’s take a look at how these pieces look on the game table. Below are two pictures that one might recognize from my Review of the Misty Moorlands TerraTiles set.

Aside from being used on TerraTiles, the Battle Pack can be used on any other gaming surface too. Below are pictures of the Ruins on a Cigar Box Battle Mat. I took the TerraTiles Battle Pack with me to Hotlead as a back up solution in case some of my friends couldn’t make it to the event. They were bringing extra terrain to fill out my Frostgrave table. My friends made it, so I didn’t need to use the ruins, but I liked having the sense of confidence that having a back up plan carries.

Even though I did not use the ruins or trees, I did use the Ice Walls as spell effects.

Aside from what I have shown so far in the pictures above, there are plenty of other terrain pieces in the Battle Pack.

Overall, I think these products are great for the Budget Minded Gamer or the Gamer who is tight on space. As an event runner at a convention, I appreciated having this compact box as back up Terrain in case some of my other pieces got lost in transit or otherwise didn’t make it to the convention.

Now, I do have some criticisms of the pieces. Aside from being a little thin from the above angle, one also has to be careful when building the pieces. I had a few pieces spread apart on me while I was pulling out the cutaway tabs.

I also noticed a small printing imperfection on the Treasure chests. It is not too bad from a distance so one may have to zoom in on the picture below to notice the issue.

Aside from the cutaways needed to be carefully removed and the small printing imperfection on the chest (which can easily be ignored), the only other issue I noticed with the set is that the Sci-Fi Barricades didn’t hold together well when I lifted them from the table. It makes for quick disassembly but it means that you have to be careful if you wish to reposition them around the table.

I didn’t construct all of the terrain in the box, but my guess is that you have enough to do two full tables worth of terrain depending on the game. The terrain is clearly scaled for 28mm, but I believe that you could use the ruins, bridges and trees for 15mm.

At $19, this is a good buy for someone that doesn’t already have a lot of other terrain.

I hope that everyone enjoyed this review of RAINN Studios TerraTiles: Battle Pack. If you were wondering what I used as a background on the pictures from the Frostgrave images onward, I used the TerraTiles: Coasts and Rivers set. A review of that product will come in the future.

Shout Out to RAINN Studios – Thanks for the TerraTiles!