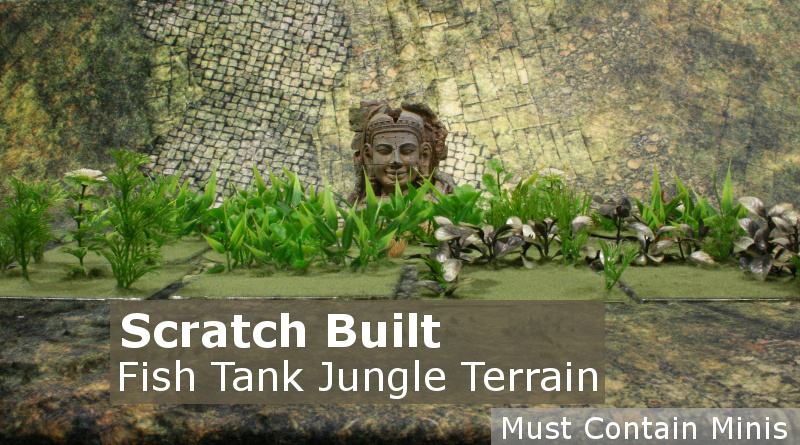 In preparation for a game of Frostgrave: Ghost Archipelago, I made a 28mm scratch built jungle. To build this, I used fake fish tank plants, CDs (and CD cases) and static grass. Being 28mm terrain, these pieces are also perfect for Blood & Plunder, Bolt Action in the Pacific, and any other games in a warm setting.  In this post, we take a look at how I made these Jungle pieces and then showcase the terrain with some miniatures.

In chatting to my friend Dave about the gaming tables that I want to run in the near future, he came up with the idea of building terrain using some old fake plants that he had for his fish tank. The next time I saw him, he gave me his collection of plants and I went to work.

Using a pair of side cutters, I trimmed the plants into smaller pieces (with 28mm miniatures in mind for scale). I then pulled out my hot-glue gun and pasted them to CDs and the tops of the CD cases.

After completing the CD bases, I moved on to using the CD case tops as bases.

Overall, they came out looking okay, but I did learn a few lessons from this project.

As stated above, I am happy with how these came out. That said, I learned a few things by making the terrain and would do some things differently if I were to do this project again. The main thing that I would do differently is that I would paint the CDs before applying plants or static grass. I would paint the bases because you can see the shinny surface of the CDs through the static grass. This effect isn’t noticeable from every angle (and you very well might not notice it in my showcase images) but it is very noticeable in the picture below.

The clear CD covers suffered a similar issue, but, because of their transparent nature, the effect worked well and actually added to the niceness of those pieces.

To be honest, I was really worried when I added the static grass to the clear cases because the PVA glue did not cover the surface evenly. This left patches on the bases without static grass, but, since I use gaming mats, the end result was that the terrain just looked more textured. I went back and added more glue and static grass to the bald spots anyhow.

Other than the glue not spreading well over the clear covers and the shine of the CDs showing through the static grass from certain angles, this project turned out pretty much as expected. The only thing that I would change for sure next time is that I would actually paint the CD bases (perhaps green or brown).

Overall, these bases turned out pretty good and they will look very nice on my demo table from Frostgrave: Ghost Archipelago.

These bases look pretty good and I already have plans for them in Frostgrave: Ghost Archipelago, Blood & Plunder, and Bolt Action.

This is all I plan to make for now, but I have enough materials to make more if I so wish.

Special thanks goes out to Dave Lamers for providing Must Contain Minis with the CD bases and fish tank plants for this project.

Thanks also goes out to Cigar Box Battle for providing us with the jungle terrain battle mat. The textures of a battle mat really adds to the look of a game and we are very happy to have the mats and gaming tiles that we have been sent. As an added bonus, I find that the mats by Cigar Box Battles make fantastic backgrounds for our showcase images.

How do you Store and Transport your Blood and Plunder Minis and Ships?