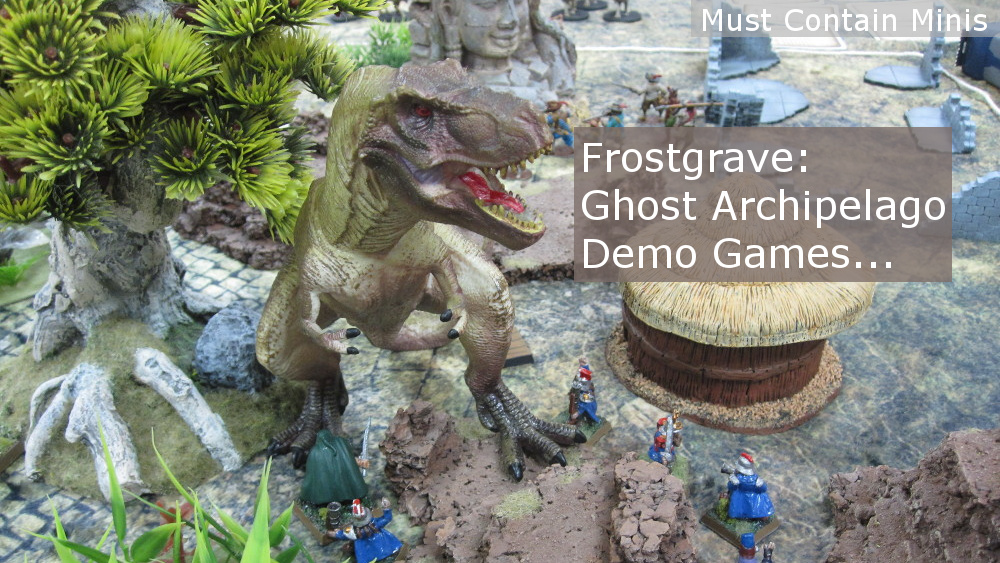 In this post, I discuss a demo game of Frostgrave: Ghost Archipelago that I ran at a local convention. Specifically, I will talk about the modifications and elements I used to interest new players in the game.

To start, I setup a great looking table. To build this table, I had some help from various companies and friends. Cigar Box Battle sent me the mat on which I set the game. XOLK provided me with the building and Six Squared Studios helped me out with that cool little hut on the table. Osprey Games has also been a huge supporter of the site and sent me the card accessories for this cool game.

I tied together a 12-foot string to outline a 3′ by 3′ gaming area, to clearly define the boundaries of the game. Often, I would create a bigger playing surface for my demo games, but 3-foot by 3-foot was absolutely perfect for this game of Frostgrave: Ghost Archipelago.

Before running this demo, I brainstormed what makes Forstgrave: Ghost Archipelago exciting. My conclusion – the campaign rules. Leveling up a Heritor between games is one of the strongest appeals to me for this game. To demonstrate this, I decided to run standard sized Frostgrave tables and run two missions with the same players during the allotted three hour time-period.

The second game was a little more interesting. Instead of treasures, the players are looking for “blips” that move about the table. What these “blips” are would not be revealed until the players come into base contact with the “blip” and spent a turn “searching” to see what is actually there. The “blips” could be a large monster or an NPC (Non-Player-Character – AKA… a Civilian) that players have to escort off the board.

Players would gain experience through a modified experience table of my own creation. To discourage pounding on the other players without reason, no points would be awarded for killing opponents or their Heritors. Likewise, players would automatically lose if their Heritor was killed. If a Heritor was taken out-of-action, that character had a 10% chance of being killed. As a result, players played a little more conservatively then what I have seen in other Demos of Frostgrave.

Before the event, I ran a practice game at a local club / store. That game went pretty well so I knew I was ready for the convention.

The objective for the first game was simple. Carry the treasure off the board. Below is how the game started. To get the players into the action faster, I had them deploy a little further in on the board. For crews, I provided two sets of Forstgrave Barbarians, my RAFM Dwarfs, and a set of Spanish Miniatures by Firelock Games.

Most of the players played fairly aggressively in this game. The Barbarians rushed in against their opponents while the dwarfs established a gun-line and the Spaniards took a mixed approach.

You would be right if you noticed the Dwarfs armed themselves with guns (Blunderbusses). I used the rules within Spellcaster Magazine for Black Powder Weapons.


How exactly the game unfolded from here, I don’t 100% remember, but everyone had fun.

Given that the best part of Frostgrave to me is the campaign system, I wanted to give players a taste of “leveling up” through this demo. After completing the first game, I tallied the players’ treasure and had them count up their experience points.

To keep things simple, I gave each player a choice of magical items for each treasure pulled off the board. While the full game uses tables, I allowed choices to simulate the fact that they would normally be able to sell off treasure and spend gold – a game aspect more complex than what I wanted to get into with a demo.

As for levels, each player gained about two to three levels based on their performance. The player that ended last, I gave four levels to make up for the fact that he had no treasure. For each level they gained, I allowed them to improve a stat or ability. No ability or stat could be improved more than once.

By following this approach, players customized their heroes and crews for the next game. Kind of cool!   🙂

As stated earlier, game two was a monster hunt. A number of “blips” were placed on the table and moved in a random direction each turn. The player that rushed quickly towards the first “blip” was surprised to find it moving at the end of their turn. I had some fun with this game. 🙂

In the middle of the table, I placed five “blips.” Generally, they moved in a circular counter-clockwise pattern at roughly 4″ a turn. The “blips” would stop when a character came into base to base contact. After spending an action investigating the “blip,” one of the following five things would replace the “blip.”

You will have to forgive me in that I am not using the proper names of the monsters. My rule book is currently packed away because I am moving to a new home. As an interesting side note, one of the monsters can be harmed by only magical weapons. Only one treasure from the first game was taken as a magical weapon that could harm the creature.

Below are some pictures from the game.


The game continued until the final scene below.

With just the Soul Possessing Demon left, all parties exit the board. No one wants to take on an entity that they cannot win against!

Overall, the Dwarf Crew was the winner of the campaign. They preformed the best in both games and the Blunderbusses proved to be super deadly.

Personally, I found running this game very rewarding. Many people at the convention showed interest in the game and I let a number of attendees flip through my copy of the rules while I set up the table. Some of those people went out and bought into the game. That is always nice when you are demoing a product.  🙂

One of the things that I LOVE about demoing Osprey Games is that they encourage you to use whatever miniatures you have.

The fact that the game is miniature agnostic, gives me the opportunity to publicly showcase terrain and miniatures sent to Must Contain Minis for Review. A large part of Must Contain Minis’ mandate is to share products made by companies other than Games Workshop – so this is a great fit.

Below is a list of products and items used for this Frostgrave: Ghost Archipelago Demo.

In the interest of full disclosure, many of the products in the list above came to Must Contain Minis as review products.

Hopefully you enjoyed this post about my Forstgrave: Ghost Archipelago demo table as much as I enjoyed running the game.

Who knows, perhaps you will be running your own “Monster Hunt” scenarios in the near future.