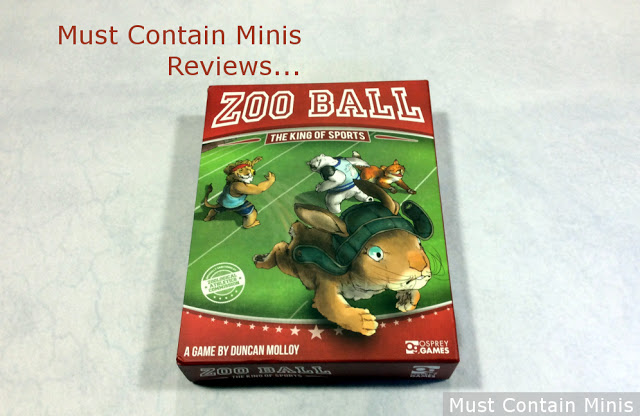 In today’s review, we look at a product that does not actually contain minis. Instead, we are looking at the board game Zoo Ball.

A big thank you goes out to Osprey Games for sending me this product for review.

Zoo Ball is a nice, simple and fun dexterity game where players control a team of three “blockers” and one “scorer” and try to score goals before their opponent. When someone scores, the game resets and everyone starts over again.

This is a game for two or four players. Please note the “or.” There is no variant for three players.

In the two player version, you use the circles on the board as the goals. The big circle is used as the goal for people that may need some advantage (such as kids), while the smaller circle are for those more confident in their skills.

when you set up, you always place your scoring disc (the one with the orange sticker) in the middle of your circle. You may place the “blockers” wherever you wish on your side of the field.

On each turn, players may flick either all three of their white disks, as pictured below, or they may flick their scorer. Once the pieces are flicked, the turn flips to the opponent.

With two players, this game plays fast and fun. With four players, it plays just as fast, but much more chaotic. Below is the starting setup for four players.

Personally, I had more fun with the four player game than the two player game, but that might be because of the company that I had over. It was a great group of people and it had been a while since we saw each other.

As you can see below, the game gets hectic with more players. All those pieces are on the board after just the first turn.

Overall, this is a good game. That said, I do have two criticisms of the game. The first of which is price. The game retails for $40 Canadian, $30 American or £21.99 for my friends in the UK. When I received the box, I thought it was a pretty light game for that price point.

Upon opening the box, I found a folded up gaming mat, some playing pieces, a number of stickers and a very small rule book. Below are some pictures of the contents of the box.

My other criticism of the game is its playing mat. For some reason this mat holds creases. In the rules, it tells you not to iron this mat – so you may end up wondering how to make this mat flat.

Before playing for the first time, I flattened the creases with some heavy books. That worked to some extent. I also heard that you can fold the mat in the opposite directions of the creases to reduce the issues with the folds.

In subsequent games, I just took the mat “as is” out of the box. The picture below and the ones above are all without taking steps to straighten out the mat. Now, to justify the effect of the creases, I went into further games that the creases are there to simulate rough terrain.

While the mat takes creases, it also works. The pieces slide across it nicely.

Despite my criticisms, Zoo Ball is a good game. It is fast, simple and fun. The cartoony artwork has its appeal and the pieces slide across the mat nicely.

While the price might bother some people, I am sure there are others to whom this won’t be an issue.

There are two groups to whom I would recommend this product. The first is to family with kids. I could envision this game being a lot of fun to play with children. The second is to the people that just want something quick and simple that sets up and plays within minutes.

If you are interested in learning more about Zoo Ball, I embedded some YouTube Videos by Osprey on how to play the game.


In the review above, I thought Zoo Ball was a good game but criticized it on the cost of the box and the wrinkles of the mat. At the time, I theorized that this would be a fun game for a family with kids, but having no children of my own, this was just a guesstimate.
Over the holidays, I had my niece and nephews over and I can now confirm that this game goes over very well for youngsters. It is fast to play and easy to teach. It easily kept them busy for two hours straight between sections of the visit.
We found this game as a perfect filler to fill time between family engagements.

Like it or not, the wrinkles in the mat are still there. We house ruled that the wrinkles were hills and valleys in the field. While the youngsters enjoyed this feature, some of the adults found this frustrating as play pieces were protected from their pieces due to the hills.
The MSRP is still high (in my opinion) for what is in the box. If you have money, this price might not be an issue. If you are on more of a budget, I have found the game at an online store for less than retail price.

Disclosure: Osprey Games provided Must Contain Minis with a copy of Zoo Ball for Review.