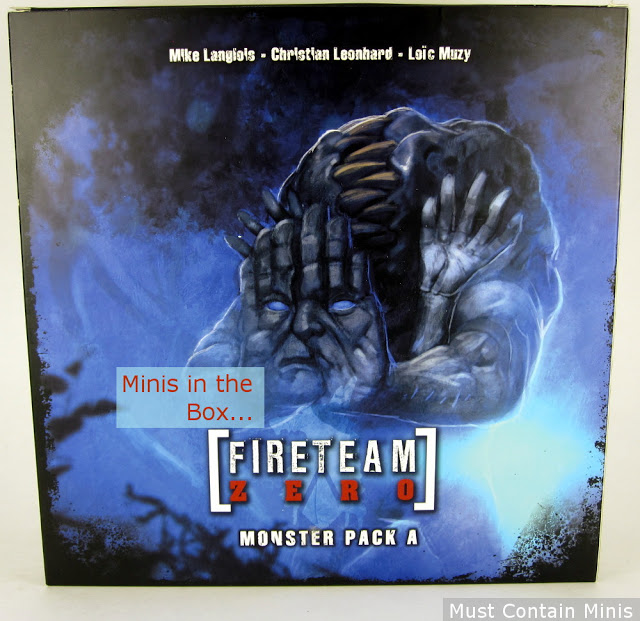 When I get a game, it is usually the miniatures that excite me the most.

Fireteam Zero has some pretty cool minis. In the past, I wrote an Unboxing Article about the game as well as a Battle Report and First Impressions Post about the main game. In the future, I plan to take a closer look at the minis in the core box, but for now, let’s take a look at one of the games’ expansions.

Today, we take a look at the minis that come in Emergent Games‘ Fireteam Zero: Monster Pack A.

In the interest of full disclosure, Emergent games was kind enough to send this product to Must Contain Minis and they are currently running a Kickstarter for a second printing of the set.

Now let’s take a closer look at the miniatures in the box.

To me, the minis look very good. My favourite is the Daughter of Typhon followed by the Infesting Queen.

The Kickstarter Page also shows the minis, but the pictures above show the details of the actual minis a little better.

Be it my background in roleplaying games or open attitude to using proxy miniatures in wargames, I always look at the minis of a game and wonder how I could use them in other games (thereby doubling the usefulness of the miniatures). I thought the same thing of Fireteam Zero.

My initial thoughts were to double the miniatures into Konflikt ’47. Having looked at the minis, I think the minis from Fireteam Zero are a little big for that, but some of the minis in the core set might fit as Totenkorps proxies (more on that later).

Perhaps you have thoughts of using the creatures in other games like Achtung! Cthulhu or Savage Worlds. If so, let me know where else you plan to use them. Personally, I plan to use them in just Fireteam Zero, but I still like to think of where else they might fit as a mental exercise.

Below are some scale pictures for interest sake.

I hope that everyone enjoyed today’s quick post. Special thanks goes out again to Emergent Games for sending this product to Must Contain Miniatures. Remember, they are currently running the Kickstarter for the second printing of Fireteam Zero.


This article contains a couple of affiliate links to DriveThruRPG. Remember, you can help support Must Contain Minis by buying from the Wargame Vault or DriveThruRPG after following one of the links from this site.