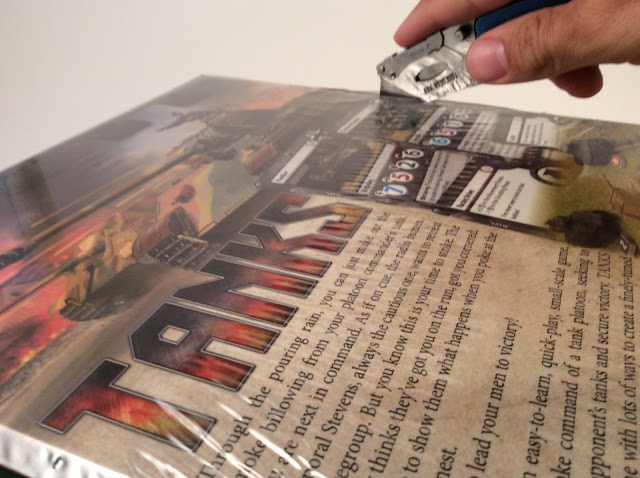 As my readers will know from my earlier post about games that I play, TANKS is one of the games on my radar. Well, this week I went out and bought a copy. One thing that I found lacking on the Internet was a written write up about what is in the box. There is lots of videos of the topic on YouTube, but not so many blog entries. This post is to help fill that void.

Retailing for around $30 Canadian, this box is a great deal for what is inside. It comes with an entirely new game, cardboard terrain and 3 plastic tank models that I can re-use in Flames of War. Better yet, I can use my Flames of War collection in this game. That is a huge draw for me.

For those of you familiar with X-Wing, Attack Wing, or Wings of War, you will likely notice a lot of similarities in the content in those games to the content of TANKS. The basics seem similar, but there are some changes to movement, shooting and turn order. All the games definitely all use the same core engine for play. That said, TANKS is aimed more at people more interested in World War 2 or modelling than the other games. The models that come in this kit are true miniatures that still need to be assembled and should be painted.

Tonight was just an unboxing. If you are interested in this product, check out its Website. At its price, it seems to be a good buy to me and I can’t wait to get it on the table to see how it compares to the other games.

How Important is Historical Accuracy… Really?