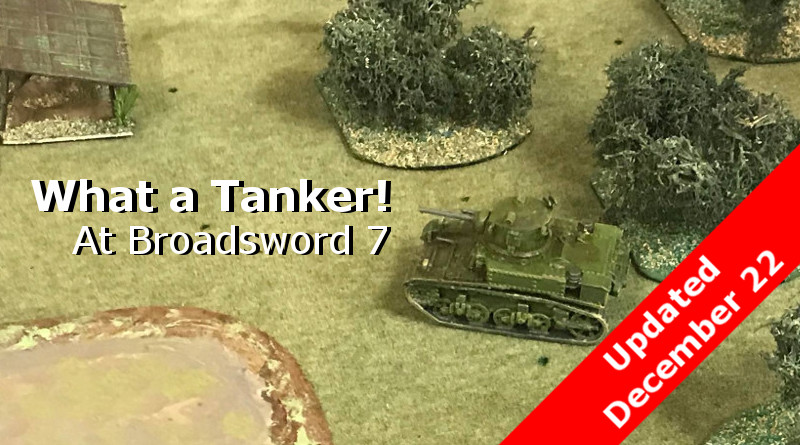 What a Tanker! by TooFatLardies gained some popularity with the Historical Gamers in my local area. I don’t know too much about the game myself yet, but I do know that the guys at the Historical club tend to like it. I also know people ran this game at conventions in my area too. Broadsword 7 was no exception either.

Now, I could not make it out to Broadsword 7, but Lee VanSchaik of Crucible Crush made the event and sent along some pictures for me to use for this site.

I updated this post on December 22, 2018 to include images from the game’s host, Howard Tulloch.

Again, I have not actually read or played What A Tanker! yet, but I can tell you what I know of the game so far. What a Tanker is made by the same people who wrote Chain of Command.

It runs on D6s and tends to run on a 6′ by 4′ table. The game itself is on the lighter (and quicker) side of rulesets, but is still more complex than TANKS! by Gale Force Nine.

The ruleset gives each vehicle a certain number of command dice. I think that number is 6. When it is your tank’s turn, you roll the dice and then the numbers rolled determine what actions your tank can do. So a ‘5’ would let you reload your gun while a ‘1’ lets you activate the driver. As your tank takes damage, you lose command dice and the chances of your tank not doing what you want it to increase. You use up all of your Command Dice and then play goes to the next player.

One of my friends hated this mechanic. A bad dice roll made it so he could not get his tank to move. He was a sitting duck for his opponent and got eliminated pretty quickly. In a normal game, you would usually have more than one tank (he was playing a demo). Also, a lot of people like these type of activation systems as you don’t know exactly what you are going to get – it adds a ‘fog of war’ or “will my guys do what I want them to do” aspect to the game.

This game seems to be popular at conventions and club level. It is lighter than many other games out there, and the people that love it, seem to really enjoy it.

What A Tanker at Broadsword 7

Bringing this piece back around to the title of the article, let’s take a quick look at the game at Broadsword 7. The event’s Facebook Page described the game ran by Howard Tulluch as follows…

Below are some pictures from that game, again, sent in by Lee of Crucible Crush.

Unfortunately I don’t have a battle report of the game, but it is good to know that up to 6 new players got to try out the game. The miniatures on this table were 20mm scale. Another person ran the game in 28mm later that day.

As mentioned above, the games’ organizer, Howard Tulloch sent along a few images we could use on this site of the game. Looks like it would have been a lot of fun to play.

Thanks so much for sending these images along Howard. I really appreciate it.

Hopefully you enjoyed this quick post about What A Tanker! Again, in my area the game seems to have momentum. Hopefully I will get to try it out sometime.