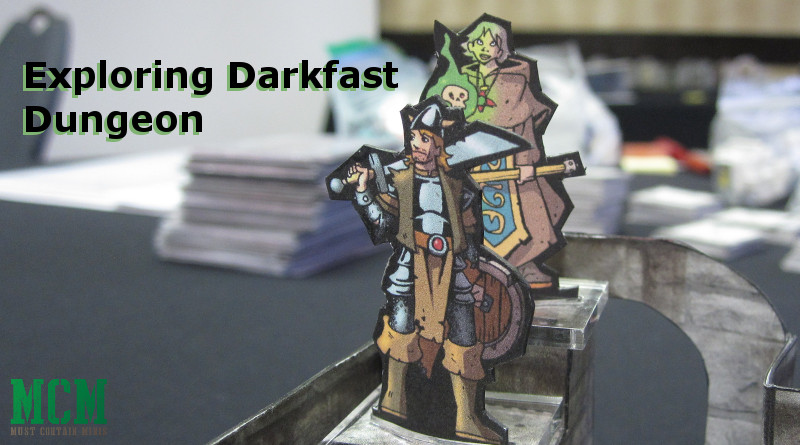 Yes, those miniatures in the picture above are paper and look pretty good! The nice thing about gaming with paper is that it is cheap and easy to do. The terrain and miniatures come already “painted” right off of your printer, and I like the artistic style. David Okum, the designer of Darkfast Dungeons, hosted me through my first game at SkyCon 2018.

If you are wondering about the bases for the paper models, they are by LITKO Game Accessories.

Now, let’s take a closer look at the game. This post is both a Battle Report and quick reflection of my experience Exploring Darkfast Dungeons.

Darkfast Dungeons is a Print and Play Game.

As you will see through out this post, the components are really nice with some great artwork on the heroes and dungeon models. One thing to keep in mind though is that it takes work to print and assemble this game. It is not playable as soon as you purchase it. You have to assemble it. That said, I have assembled paper models in the past and making them is just part of the fun.

To start Darkfast Dungeons, you choose a hero and draw Random talents. In this game, I played as two heroes. One as a Fighter, and the other as a Skull Adept. Below is the card for my fighter and the random talents I drew for my character. Just great. My Fighter was stupid! That card prevented him from acting how I wanted him to for a few turns. 🙂

After getting my characters ready, I went down into the dungeon.

The Dungeon started as a single room. Each time we went to an entrance and checked the next room, a random room was determined by a roll of the dice. Our objective was to explore a certain number of rooms in the dungeon and then escape alive. Of course, we are to take as much loot as we can too!

What is inside of the objects and rooms is also determined by dice rolls. David designed Darkfast Dungeons to run as a cooperative game with no GM necessary.

At this point, the Fighter turned on the Skull Adept. Oh, oh!

Once I realized I could charm more than one creature at a time, and the effects were indefinite, I had a ball running my Skull Adept around and trying to increase the size of my war-party.

After the Cultist, I charmed a Winged- Imp-type creature to join my group.

I then tried to charm the Cultist Leader. The spell did not work, so I pushed forward my Cultist to provide protection. Around the table we made jokes about what the Cultist would say to his Leader after he switched to my side!

Sadly, I could not recruit the Cultist Leader. At this point, both my Skull Adept and Fighter were nearly dead. The Cultist Leader killed my Winged-Imp so all that was left in good health was my Charmed Cultist. I needed to find some healing potions or something fast!

Pushing forward, the group comes across a Thug. The Skull Adept casts his last Charm spell and recruits the Thug into the group too.

Luckily, the room on the opposite side of where we were happened to contain a healing well.

Trailing behind my Skull Adept was my Fighter, but he would die of his wounds.

Deciding to split up the group, the Thug continues down one of the hallways and reveals a large number of rooms and collects a few treasure items from his own old room! Those items shall now belong to my Skull Adept once they come out of the dungeon.  🙂

As you might have guessed, the Thug turns on my Cultist. Now, we did manage to push a little further and see the next room, but that is as far as we got.

We did not explore the full dungeon, so we did not win – but the Cultist and Skull Adept left with their lives. That is still a win in some way.

My Game Master stayed with me and discussed the game a little further. It is always exciting to play a well produced game with its designer and I liked staying around and chatting to David about his experiences.  For the sake of interest, I rolled to see what the final room would have been. If we explored the whole dungeon, it would have looked as per the picture below. It is interesting to note that in order to win, I would have had to explore all rooms. I did not know that when I started as the Dungeon rooms were random.

Not all pictures that I took made it to the post above. Being that this game looks so nice on the table, I decided to include a section here of extra pictures. Hopefully you enjoy them too. While these paper miniatures and dungeon look good for the camera, they looked even better in person. Okumarts Games did a good job on the presentation of this product.

Overall, I had a lot of fun playing Darkfast Dungeons. We played with the base set, and some of the expansions. Of course, it makes the game even better that I played it with the game’s designer, David Okum.

If you are interested in checking out the product yourself, Okumarts Games has 120 items currently listed on DriveThruRPG. Many of those products are geared towards Darkfast Dungeons across various genres. There are also RPGs produced by his company and an absolute ton of paper terrain and miniatures.

The paper miniatures are a handy tool that could also be used in other games too, including miniatures games (like Frostgrave) and RPGs (like Dungeons and Dragons).

If you use the paper minis, you can buy special acrylic stands for them or build your own out of paper or foam board. Paper is just an affordable way to get into (or expand upon) gaming.

Hopefully you enjoyed this article.

This article contains a number of affiliate links to DriveThruRPG and Amazon.

If you like our content, you can help us out by buying through those links. If you visit DriveThruRPG or Amazon through this site and make a purchase, a small percentage of the purchase price goes to helping us out. Generally that percentage is about 5% of the purchase value, and the support is highly appreciated.

If you happen to be a miniatures related company and want to help, we do take in Sponsorship and Review products. We do our best to feature items sent to us by our friendly supporters and include a section for them under our Sponsors tab on the top menu of our page.