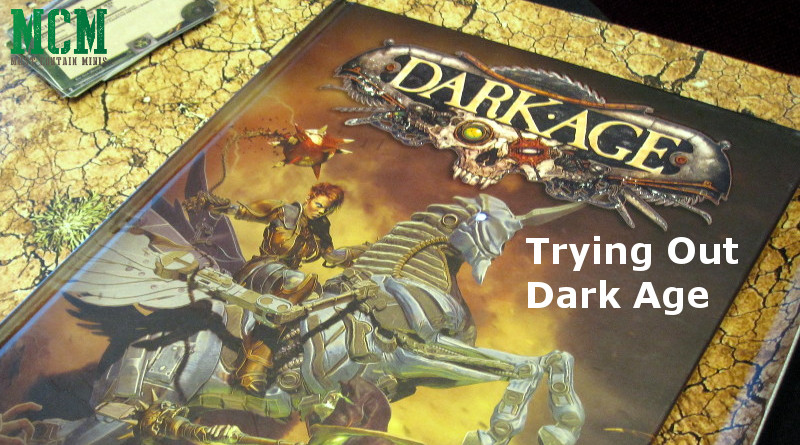 I absolutely love testing out new games and trying new things in the world of miniatures. At SkyCon 2018 (in Kitchener, Ontario), I tried Dark Age by CMON. I wanted to try Dark Age for a long time, but it is not the biggest game on my local scene. That said, a group got into the game and enough people are playing to run a tournament at SkyCon. On top of a tournament, one of the players ran a demo of Dark Age the day before.

One of the topics I have been chatting to people in person with lately is what makes a good table for a demo or participation game. Everyone agrees that an attractive table certainly helps. Check out this table.

On top of looking great, this table would also be fairly affordable to replicate. I have used PlastCraft Buildings in the past and they are fantastic value for the money. The mat is made by a company out of Russia called Warzone Studio. Their prices seem fairly good too.

Now on to the Demo.

Myles Buck, the man who ran the demo, brought two forces to the table. He gave me the choice of a Brood force or the Outcasts. The Brood is a collection of genetically modified mutants with regeneration powers. Meanwhile, the Outcasts are a diverse group of survivors making it through whatever means they can. Myles told me the Outcasts would likely be the easiest to play at this table, but I could take my pick. Captivated by the idea of regeneration, I chose the Brood.

In the demo, the Brood sported 5 characters (and a couple of small extra creatures) while the Outcasts brought 5 characters to the battle.

One brood member specialized in close combat, two in ranged combat and the last was a special creature called a Mandible. The Mandible brought along two Pud Roamer helpers.

Meanwhile, the Outcasts brought along a couple of long ranged Bounty Hunters, a couple of melee specialist Pit Fighters, and a Leader.

The goal of this demo game was straight up to kill your enemy’s force.

Right off the top of the game, one of my ranged combat monsters (a Grist) took out the enemy’s first casualty. In all honesty, it was a very lucky shot

At this point, things were looking really bad for me. As you may notice up above, I rushed in my melee characters and my two Pud Roamers to act as a speed bump. There job all of a sudden was to save my Grists from doom!

In the end, the Brood took no casualties and completely eliminated the Outcasts. The Girsts proved extremely effective even though it looked like they might have come their end just a turn or two earlier.

I had a great time checking out Dark Age. Thank you Myles Buck for running this demo game.

Below are some of my thoughts about the gaming system based on the demo.

First off, Myles ran a good demo. I got all of the basics of the game quickly. It did not feel overwhelming or difficult. As far as the win, I think I was a little lucky and you never know if the Game Master (my opponent) went easy on my while I learned the rules.  🙂

The game runs on twenty-sided dice (d20s) and figuring out the target values is simple and straight forward. The game uses Critical Failures for higher tech weapons. If you fire with a ranged weapon, there is a chance that it will misfire (or worse). These aspects remind me of D&D in a way, but the values are reversed. Rolling low is good. Rolling high is bad, perhaps very bad depending on what you are rolling for.

The ranges of the weapons also surprised me. They are incredibly short compared to other games. We are talking just a few inches.

Finally, the game utilizes movement points. Each character gets so many points per turn. They may move their movement range once for each action point used. They can also use these points for attacking and other actions. We just used the for fighting, shooting and moving.

I believe the full game also uses a deck of cards, but we didn’t use any cards except for quick reference unit cards.

Overall, I really enjoyed giving Dark Age a try. The game has been on my radar for a long time. I’ve been even more interested in the game since the “Path to Glory” 2-player starter box was released for the game.

Special thanks goes out to Myles Buck for running the game and to Robert Morris of SkyCon for allowing me media access to his convention.