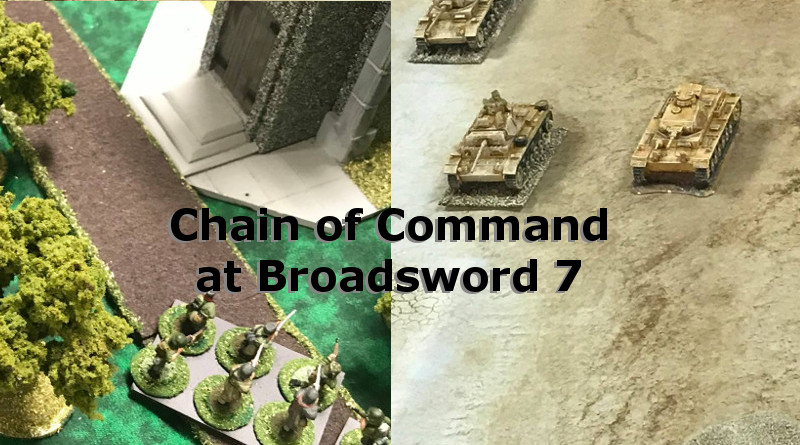 Have you tried Chain of Command yet by Too Fat Lardies?

I’ve played it a few times and it tends to be more of a simulation style game. That is, in comparison to the typical World War 2 games that I normally play (Bolt Action and Flames of War). At a recent convention (Broadsword 7), a couple of game masters ran this game for new and old players alike.

Unfortunately, I missed Broadsword due to family reasons. Hopefully, I will make the next ones.

This article serves as a light review of the system, a comparison piece to Bolt Action and a bit of a report of the games played at Broadsword 7.

As a note, I listed this in the Bolt Action section of the site as this post draws comparisons between Bolt Action and Chain of Command.

A bit about Chain of Command

As I stated above, the Chain of Command is more of a simulation than the other World War 2 games that I play. There are more random elements and you don’t have complete control over what your troops do all the time. Dice determine how and what you can activate on a turn (each number determines a different result). Rolling “5’s” doesn’t help you on the turn that you roll them but help build you up for a “Chain of Command Die” that gives you powerful effects in the game. These effects including interrupting your opponents movement or springing ambushes. For a normal group, you get to roll 5 command dice when it is your phase. For an elite, group, that changes to six.

Force composition is also done a little differently. You get a core force with support elements. You may get to choose your elements, but you are not making lists in the same way you are for Bolt Action or Flames of War.

Deployment is dealt with through a series of patrol units that establish your “jump off” (deployment) areas. As I have only played a handful of Chain of Command Games, I can’t elaborate on it further at this time.

Chain of Command vs Bolt Action

In Chain of Command, you don’t always get to command the units the way you would like due to dice rolls. Likewise, you may not know what distance your guys will move in a turn or where your opponent has hidden their units. This gives more of a simulation feel where you are placed in the spot of your commander. You know what you want your guys to do, but whether they are capable is a different matter.

Bolt Action, on the other side, feels “gamier.” It has fixed movement distances, every unit gets a command die, and there is a points selection for army composition. Now, I sometimes house rule alternative rules for hidden units because I don’t like the rules for that aspect of the game. That said, I still prefer Bolt Action over Chain of Command.

The reason for this is that Bolt Action lends itself better to heroic scenarios of momentous movie proportions. I also like the points build formula for forces, and that those who come from Warhammer will feel right at home in Bolt Action.

That said, if you want to feel like a true commander, I would hazard to say that Chain of Command might be the better game for you to explore.

As I mentioned above, I could not make it to Broadsword 7. Lee VanSchaik of Crucible Crush would be my man on the scene though and he sent some pictures of the day. Below are some of the pictures from that event. Thanks Lee!!!

Unfortunately, I do not have full battle reports, but I do have the game descriptions and a few shots of each game.

Thomas Sero ran a game for up to four players in WW2 France. Below is the description from the Broadsword Facebook Page.

The German Blitzkrieg is overwhelming France. While the Panzers are racing ahead, the German infantry desperately tries to catch up. The French army are trying their best to find where exactly the Germans are located. Two reinforced platoons, one German and one French meet in a town at an important cross road. Will the Germans continue their race to the sea, or will the French stop them in the battle of “Landouzy-la-Ville?”

I am not sure who won this game, but I am guessing that both sides had fun!

Sean Malcolmson ran a game in the deserts of North Africa for up to 8 players. Below is the description of his game followed by some pictures.

Italian & German forces of Rommel’s DAK are in the move, driving fast toward Egypt. A weak force of Indian and British troops must hold him back.

Looking at these pictures makes me wish I was able to be at the event. Thanks again Lee of Crucible Crush for sending us these images.

Hopefully you enjoyed this quick article about Chain of Command by Too Fat Lardies. It offers a light review of the system, a comparison to Bolt Action, and some pictures of two Chain of Command games in play.

As a note, my opinions of Chain of Command are based on three participation games I played of the system at conventions and watching a few matches at a local gaming club.