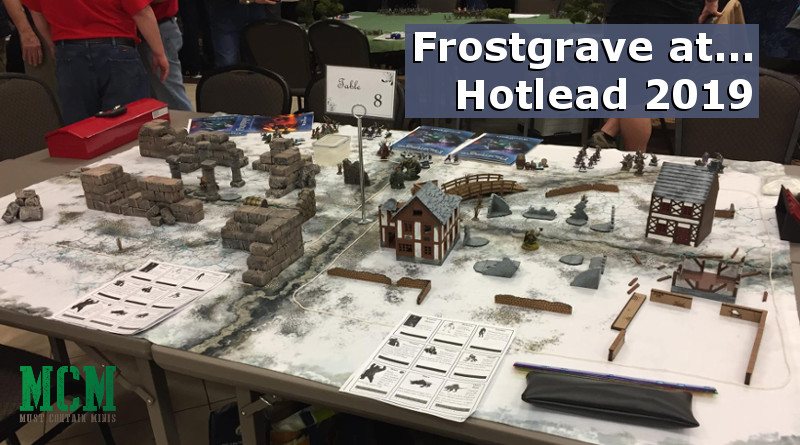 In this post, I discuss the games I ran of Frostgrave at Hotlead 2019.

For those that don’t know, Hotlead is one of my favourite gaming events. It is local to me and often draws in over 300 gamers per weekend. This year they celebrated their 25th year of running the event and I had a great time. To celebrate, they gave out some great miniatures of a WW2 British Soldier drinking tea by Pulp Figures.

On top of the free figure, the Hotlead crew also gave out cake and ran a fantastic event. Thanks goes out to the organizers.

I must admit though, that I went a little bit off topic. Now let’s get back to Frostgrave.

Circling back to Frostgrave at Hotlead 2019, one of the things that I love about Osprey Games is that their games are miniatures agnostic. You can use whatever miniatures you want. That means that I can pull out my entire collection of miniatures and bring out a little bit of everything. It certainly makes it easier to get a table ready for convention gaming. It also gives me an opportunity to showcase products sent in to me by various companies to the public.

The terrain on the table to the left is homemade. The terrain on the right is all by XOLK. The gaming mat is by Cigar Box Battle. All great stuff. The miniatures in this demo game come from many sources. I have miniatures by RAFM, Reaper Miniatures, North Star Military Figures and a few other companies too.

Running two games went very well. The group at one table knew the rules and were fairly self sufficient. They got in two full games with leveling up in-between during my allotted time. I found that very satisfying.

The fact that they didn’t need too much attention allowed me to concentrate on the two newer players. Feedback after the games was very positive and I enjoyed my time too.

Being that I ran the games, I could not take enough pictures to generate a coherent story for a full Battle Report. That said, I still wanted to share some pictures from the event.

The scenario that I ran on both tables was the Abandoned Workshop from The Wizards Conclave expansion.

The second table featured some homemade terrain borrowed from a friend. I am not sure if he made it himself or bought it off the used market. Regardless, it is nice and fit the table well.

Hopefully you enjoyed this Demo Game Report of Frostgrave at Hotlead 2019. It was a lot of fun and I always like getting new and experienced players alike at the gaming table.