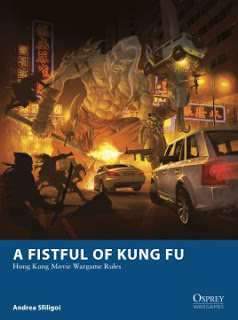 Recently a friend of mine was looking for people to run games for a Convention in August. I decided to volunteer. This will not be the first time for me to run a convention game. A number of years ago I ran a Mansions of Madness game by Fantasy Flight Games table at a Convention (my set is completely painted). The game that I think of running lately is A Fistful of Kung Fu. Ever since I bought the game over a year ago, I thought this game would be a blast to run for a group of people.

The Convention that I plan to run this game at is Broadsword 2 in Hamilton, Ontario, Canada on August 20, 2016.

Before the Convention date comes, there is lots of work to be done. The rules need to be studied, test games need to be played and the concept and story line need to be mapped out. The organizer of Broadsword 2 has themed the event after Call of Cthulhu and encourages people to run games with that theme. I am sure that other games without the theme will be present, but I am going to make A Fistful of Kung Fu fit the subject matter.

The rules in A Fistful of Kung Fu allow the player to use whatever figures they have. I happen to own a lot of figures by RAFM and Reaper Miniatures, so I plan on using them. I separated my figures out into 6 different factions/warbands for the game. Below are samples of the Warbands that might be found on the table.

This will likely be a game for 2 to 6 players. The sixth faction has not yet been decided. They could be either Beat Cops or Armed Civilians. Let me know in the comments (here or on Facebook) which of the two you think I should go with. The rules suggest that when multiple players are involved, that the teams should be two-sided (rather than played as everyone for themselves). Finding three Factions for the Cthulhu side is easy – Monstrous Creatures, Deep Ones and Cultists. This leaves the opposing side as Outlanders, SRU and either Civilians or Beat Cops depending on which group is choosen for the game. Story-wise, a unifying factor needs to be established for the Outlanders to be working with the SRU. Please let me know if you have any suggestions for story arcs giving reason to the situation. I am thinking that the Outlanders are either Mercenaries, or know that worse times are to come if they don’t team up with the SRU to stop Cthulhu from being raised.

The next part of brainstorming for this event will be selecting out exactly what plot-lines and complications to use for the game. Once that is figured out, I have to go about setting the table. Please feel free to post comments and suggestions about this game to either this Blog page or to Facebook.