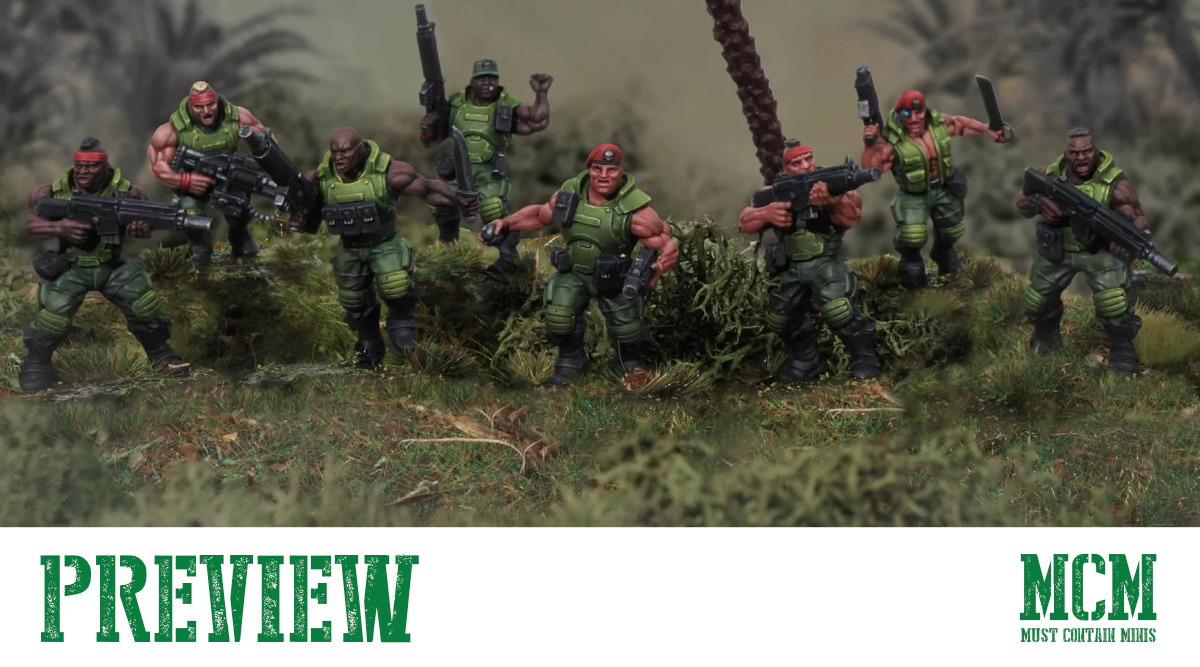 Have you seen the news about Wargames Atlantic’s new kit – SpaceNam with Reptilian Overlords?

These new miniatures look so cool!! When I saw previews of this new set, I thought about how Wargames Atlantic covers near every type of 28mm human Sci-Fi solders that one could ever want for a miniatures game. What surprised me about this release is how quickly they came after news of their Sci-Fi British Soldiers. On top of that, Wargames Atlantic also released news of their upcoming space bugs!

Now, back to these new figures. With the SpaceNam miniatures made by Wargames Atlantic in partnership with Reptilian Overlords, we find some 28mm Sci-Fi Jungle fighters who look super heroic. On top of that, these are on pre-order already!

Now, onto the sprues.

Wargames Atlantic has given us a preview of the sprues to these miniatures. I took a copy and placed it here for easy access. Check them out.

These guys have some big muscles and what look to be heavy bullet proof vests. I also see some weapons that resemble a sniper rifle, grenade launcher, flame thrower, and a few other things too.

Now, let’s see how these minis look when constructed.

To me, these look similar to Catachan Jungle Fighters by Games Workshop, but perhaps tougher. Look at those vests. They actually offer some protection. These minis also happen to be newer. If you use these as alternative figures, you are looking at slightly less than half the cost vs GW. You can save even more by buying multiple boxes at a time.

Today’s post was about raising awareness about a new product taking pre-orders that I think looks super cool! There are similarities to Catachan Jungle Fighters in that they both come across as Vietnam War inspired Sci-Fi figures. That said, there are more than enough differences in style and execution to make these different and something special in their own way.

When it comes to 28mm Human Sci-Fi minis, I am loving the variety that Wargames Atlantic keeps putting out. There are so many different options for proxy guards in their product lines. Perhaps you use them for other games. That’s okay too!

Personally, I love the Les Grognard models and like that they already have heavy weapon teams. I hope that they come out with Heavy Weapons Teams for these SpaceNam Soldiers soon.

I also really like their Bulldogs. These are Sci-Fi British inspired minis. On top of that, all of their sets are really nice. If you want to help build the release schedule for the minis that Wargames Atlantic is making with Reptilian Overlords, check out their survey. That said, this survey is almost over so it might be over if you go there from here. Still worth a check though.

Hopefully you enjoyed this quick look at some miniatures that excited my imagination.