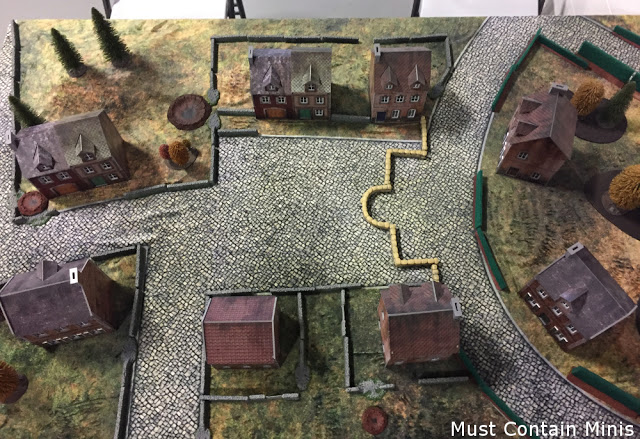 In today’s Bolt Action Battle Report, 1200 points worth of Germans take on the British in a Late War battle over a little town. Check out this table. Just stunning!

My opponent tonight is Jeremy Cada of Forbes Hobbies. Below is his army.

Below is the army that I brought to the table. To be honest, I was hoping to play Sea Lion, so parts of my army are actually kitted for Early War instead of Late War; however, I was able to add a few extra pieces and presto, I had a Late War army with a retro tank hunting unit.

Before deploying the armies, we posed them for photos.

For the scenario, we chose to play “No Man’s Land.” To make things interesting, we discussed alternative optional rules to use with the scenario. We thought about using the “Command & Control Breakdown” rule that I used in my last Battle Report, but instead we decided to house rule a stealth rule.

In a regular “No Man’s Land” mission, units on the board may start hidden. We discussed how the regular Bolt Action Rules give hidden units a bonus to defence, but you still know what those units are and where they are on the table. Knowing where the units are means that we can keep our tanks clear of any hidden anti-tank assets.

Deciding to do something different, we discussed how other games deal with hidden units and ambushes. Being a collector of rules, I have a lot to draw upon. We settled upon a rule inspired by “Blinds” from Guy Bowers’ Black Ops.

The crux of the rule is that you don’t 100% know where the enemy units are. To represent this “Fog of War,” one can use cards. Not having regular playing cards, we improvised by using Magic Cards and wrote on them what units they represent.

This extra rule worked out very well, but if we use it again, we will likely use face up playing cards and secret lists. We found ourselves losing track of which cards were fakes with the magic cards used the way we used them.

To keep things simple, we skipped “Preparatory Bombardment” and treated the blinds as normal units, for the most part.

Right off the top, the British light mortar team fired at the five man squad. I rolled a 6 to range in and even happened to kill one of the men in the unit with a couple more 6s.

In retaliation, Jeremy fired his popped a sniper and killed my mortar team with a single shot.

Jeremy then fired off his medium mortar at the house containing my MMG team “blind.” He missed. I then revealed my first Forward Observer and called in a barrage.

At the end of the first round, the Germans are winning one kill to none, but that would change soon.

The sniper is still in the building and uninjured from the artillery barrage. The British draw the first die and bring their Sherman out from reserve. They fire a shot of HE at the building with the sniper. Bang!!! No more sniper!

The Germans then tried to bring on their StuG, but its crew didn’t feel like fighting yet. The British now have three kills to the Germans’ one. The rest of the round consists mostly of troop movements and the British revealing their “blinds” to fire at units in the open.

The round now ends with the British leading three kills to one. For the next round, units would continue to whittle each other down, but the key action is below.

At the end of the third turn, the score would not alter; however, the Germans would suffer their second direct hit from a barrage of British guns.

At the top of the 5th round, the score is 4 to 1 for the British. The battle rages onward, but the key piece of action this round is that the British take out the StuG with the Sherman. The score is now 5 to 1.

The next round would start with some fire between buildings.

And there you have it! The British win in a 5 – 2 victory over the Germans. I had a blast playing this game and Jeremy was a great sport. He might have turned the score around if we made it to round 7. The fact that I rolled so well with my Forward Observers really helped my side attain the victory.

I hope that you enjoyed this battle report. To end, I would like to leave you with something that you don’t see much on Must Contain Minis. That’s right, it is a Picture of me! Thanks for being such a great opponent Jeremy.  🙂