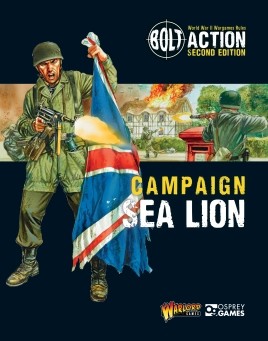 Recently I got my hands on an advanced copy of Bolt Action’s Campaign: Sea Lion and, boy, did Osprey Publishing and Warlord Games ever hit the ball out of the park with this book!

The basic premise of Campaign: Sea Lion is that Hitler actually invades Britain as he contemplated on doing during the war. This never happened in history, but this campaign is a “what if” scenario that uses units that both sides built up in case the invasion ever actually happened.

There are a couple of things that I want to draw out for my readers attention. One, nearly everything is new! Two, this book is for German and British players in the early war period. If you are solely a Soviet, American, Japanese or small Nation player, this book is not for you.

For those of you that play German or British armies, read onwards.  🙂

To give an idea of what is in my pre-existing Bolt Action collection, I am a Late War British player. I have German and American armies too, but my painted army, that I use regularly, is British. Upon reading this book, I found myself thinking of how to retool my late war army to fit the units in the book. At its simplest form, retooling for Sea Lion involves removing some of my SMG soldiers from the basic units. After that, the armament fits the unit descriptions in Campaign: Sea Lion.

Many of the new army lists in this book are called “Patrols.” These lists are intended to be used for smaller ‘Raid’ engagements but can also be used as allies of “Reinforced Platoons.” Of the lists in the book, there are four that I would love to build if time and budget were no issue.

The Urban Militia is exactly what it sounds like. British civilians taking up arms against the German invaders. The weapons they can take include hand weapons (for melee), shotguns, rifles, a pistol and even a blunderbuss. The Water Patrol is similar to the Militia, but with fewer weapon options and the ability to take a motorboat as a transport.

The German British Union of Fascists (BUF) is depicted in the book as wearing Blackshirts and using a whole range of weaponry from hand axes and hammers to rifles and shot guns. They have access to some unique models that I just love. The Gangsters platoon is comprised of, quite simply, Gangsters. They, like the BUF, can use a variety of weapons, but can be better trained than their BUF counterparts. The gangs also use a unit called the “Hangers-On.” This unit is armed entirely with improvised hand weapons (save for the leader who has an option to take a shotgun or pistol)

Check out this unique BUF model below!!!

I absolutely love how Warlord modelled the BUF Support Squad! It is a pair of guys using a pipe and wrench as an improvised mortar. Wow!

Outside of these units, German players have access to all sorts of neat things including Invasion Barges, Assault Boats and Tauchpanzers. The Tauchpanzers are sealed tanks intended to be dropped in the ocean several hundred meters from shore. From there, they would drive on the seabed to the battle. There are special rules for the Tauchpanzers and these tanks could find themselves stuck on the seabed or driving around in circles under the sea. To me, this is simply brilliant stuff that should be a lot of fun to play on the table!

The scenarios in the book all look to be very interesting. Now, they do state in the set up exactly what lists players should select for the game. This makes for interesting and heavily themed scenarios, but it might not be fair to people that don’t own multiple lists. For them, I would suggest that you use the “Forces” portion of each scenario as a guideline and perhaps replay the scenario if you end up purchasing those “required lists” in the future.

There is a campaign system in that each scenario provides points depending on objectives completed. At the end of a series of games, players tally their scores and look at the difference to determine the overall winner and to what level that player won (i.e. Draw, Tactical Victory, Crushing Victory and so forth).

Before writing this review, I took the book to both my local gaming store where I play Bolt Action and to a local Gaming Convention. I asked select individuals to keep the content secret (as the book had not yet been published) and let them browse through the book. Their reactions were as pleasant to the book as mine. Two of them even said that they were “uncertain of the book, but now that they have seen it, they have to buy it.” They were impressed with how much new content is in the book and it really got their creative juices flowing.

One of the guys even talked about possibly doing up a Women’s Federation Toxophilite Club Patrol. This list consists of multiple shooting teams all armed with Longbows. How crazy is that?! It is a desperate situation when someone would take a bow an arrow to the field against guns. That said, there are a lot of civilians armed with all sorts of weapons in this book (including clubs and knives).

Campaign Sea Lion for Bolt Action is absolutely fantastic! This book offers a ton of new content and it really got my imagination going on multiple potential projects. I had high hopes for this book and it exceeded all of my expectations. My hat really goes off to John Lambshead and the rest of the team at Warlord Games and Osprey Publishing for producing, what I would consider, a perfect supplement to Bolt Action.

Usually I like to have a few criticisms in my reviews,  but I didn’t really find anything negative in Bolt Action’s Campaign: Sea Lion.

As I stated earlier, Campaign: Sea Lion focuses on the German and British armies only. If you collect neither, this book is not for you. It also focuses on early war lists so those who play late war only might find themselves retooling their existing lists and buying models to make their lists fit the scenarios in the book. Likewise, the scenarios suggest the use of specific lists which might put some people in the situation of not being able to play scenarios without using substitute lists and units.

Finally, the format of this book is how I feel they should have published Konflikt ’47; that is, as a supplement rather than a separate game. At the same time, I totally understand why they went the route that they did with Konflikt ’47. Konflikt ’47 has been very well received by a certain demographic, but not as well received by the historical community. As a separate system, the people that want to play just Konflikt ’47 don’t have to buy two books, and it probably lessened the backlash from historical players that wanted no part of science fiction units in their games.

It is my hope that the historical community will gravitate towards, and accept, Campaign: Sea Lion much more readily than they did to Konflikt ’47 because the game is tied closer to historical units.

There is a lot of good stuff in this book and it would be sad for people to miss out on this one. Personally, I am a fan of both Konflikt ’47 and Campaign: Sea Lion, but I am really excited about Sea Lion at this point in time.

The Armies Of Oathmark – Covers the core rule book