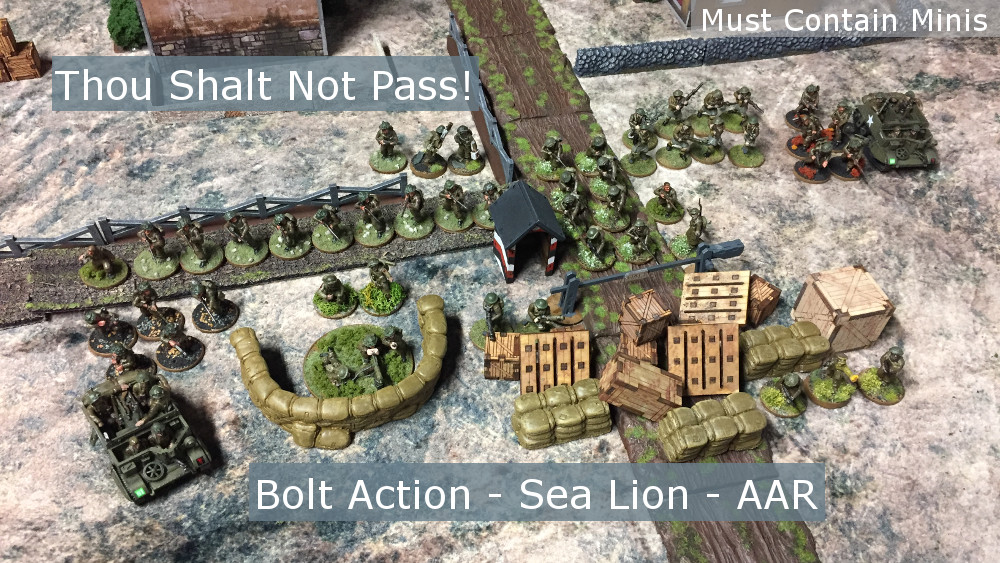 This post is a Battle Report for a game of Bolt Action: Campaign: Sea Lion that my friend Dave and I played. In this one, Germany invades England and the British set up a roadblock to slow down the German forces. To win, the Germans must capture the Security House with no British unit in range of contention by the end of turn 6 (with a variable chance for a turn 7). I played as the British and Dave controlled the Germans.

I got a lot of good pictures from this game. After the report I added some “eye-candy” pictures. These are pictures that I didn’t use to tell the story of the battle that unfolded, but wanted to include.

Unfortunately, I did not get a shot of the German force before the game. They had a Panzer 1 (armed with the twin machine guns), a heavy howitzer, a number of infantry squads, a medium mortar team and a sniper.

My force, contained two universal carriers (used as transports), two 5 man teams, two 8 man teams and one 10 man team. I also had a light mortar team, a MMG team, a sniper, an anti-tank rifle team, a medic and a first lieutenant. Attendants followed both the lieutenant and medic to help as necessary.

For this mission, the British started with half their force on the table. The Germans would start with no units on the table, but could instead bring their units in from the opposite side of the board using the First Wave rules.

I set up my forces to guard the road block.

With the British force set, we started the game.

On turn two, the British reinforcements would start to arrive on the table. Meanwhile, the Germans push their advantage with their extra men on the table.

On this turn, things really started to look bleak for the British defenders. The Germans started by firing their howitzer at the house where the British hid their sniper. The sniper would not survive the turn. He was obliterated in a single shot of HE. Meanwhile, the Germans rush the objective with the bulk of their forces.

The Germans continue to press forwards to their objective. Can the British hold them off? The MMG Team is proving its worth well beyond the points it cost to buy.

After the large infantry unit was take out, the Germans on the side wing ran closer to their target (the MMG team). Of that large German squad (pictured in the last image), only two of them made it to their desired location. The gold die shows that the MMG has already suffered a loss and is down to two team members.

Things are getting close to the end now and not too many Germans made it through, but there are still more coming!

The fighting continues. At this point, it could be anyone’s game.

In the end, it was the British that won the game. They held off the Germans with a roadblock long enough for their cities to better prepare for the coming battles.

In our last game, Dave and I came to a draw. I was very happy to win this one. That said, the real reason I like to play Bolt Action is for the narrative that unfolds on the tabletop and this was a fun game!

Below are some of the pictures that I didn’t use to tell the narrative of the battle, but I still wanted to share.

Hopefully you enjoyed this Bolt Action: Campaign: Sea Lion Battle Report. We had a great time playing the game.