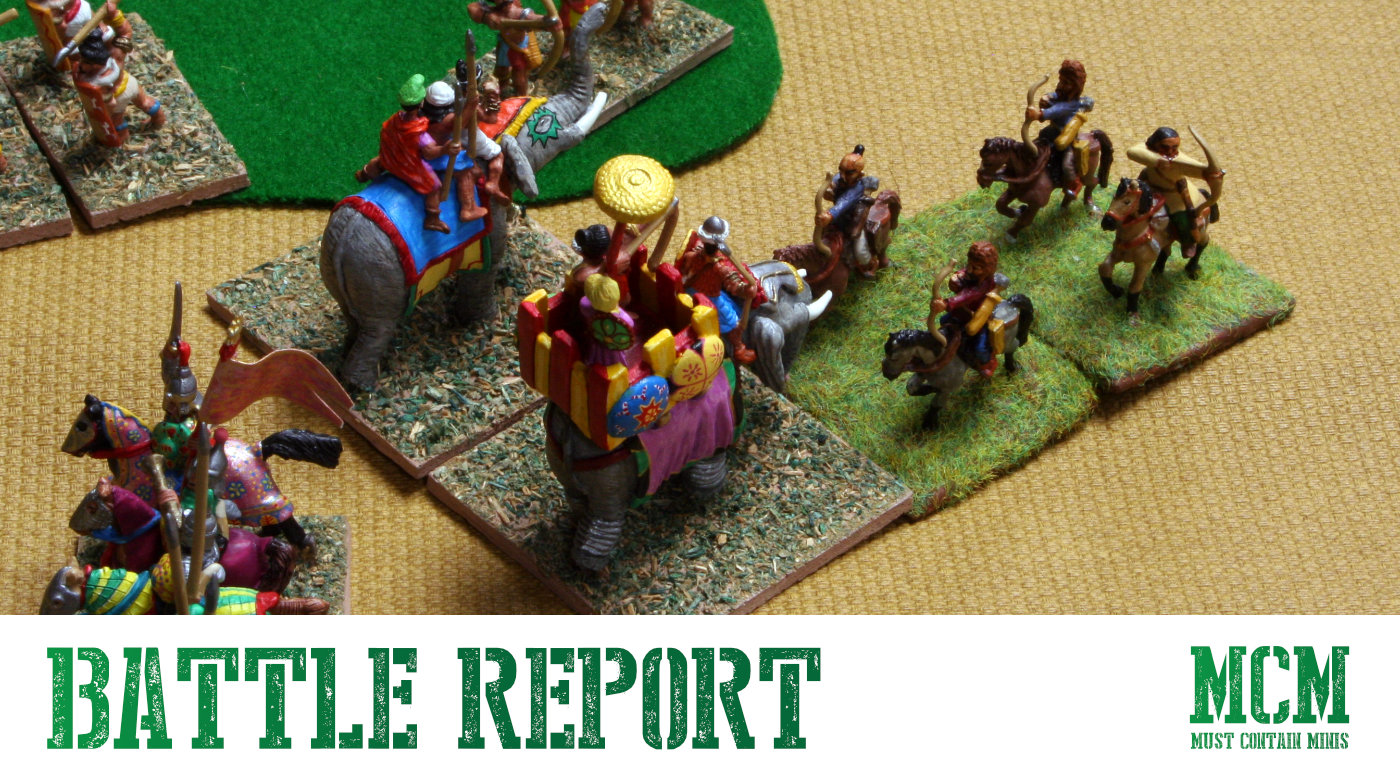 In today’s post, I bring you my third DBA Battle Report. DBA, or De Bellis Antiquitatis, is a game I played a few times. I played this game about a year-and-a-half ago at Phoenix Games and Hobbies. Remember last year when we could actually play games at the game store?

I certainly miss being able to play games with friends and not have to worry about getting sick from a pandemic. For now, I will just have to catch up on my unpublished Battle Reports from a while back.

Now, let’s set the scene for this DBA Battle Report.

In this battle, two armies face off for supremacy. I played as the Medieval Hindu Army. My friend, Wayne, brought a Central Asian Turkish Army to the table.

Both sides set up equally with camps directly across from each other. Points would be given for kills and taking over the opponent’s camp.

In choosing armies, I liked that my side came with elephants and plenty of archers. My opponent came with plenty of cavalry.

Anticipating a head on challenge, I made an archer line midway up the field with my cavalry in behind. I left the camp very lightly defended with two war elephants in reserve.

I positioned the camp right beside the river to give it extra protection.

Although I expected a head on challenge, my opponent, Wayne, knows what he is doing. He would not ride his cavalry into the range of my bows. Not for a few rounds at least.

Wayne kept his main force back. I got frustrated with waiting and sent my heavy cavalry in to take the fight to the enemy. Meanwhile, Wayne races his mounted archers past my defensive forces and rushes straight to my camp.

If you look closely above, you can see that I sent my elephants towards Wayne’s other cavalry and am bringing my heavy cavalry back towards the camp on the right hand side of the table. The reason for this change is to try to maximize on the strengths of my heavy cavalry and war elephants.

The Mop Up Job

Having taken out my camp, Wayne is clearly in the lead for this DBA Battle Report. Now, he focuses on how to wipe out my army now that they have no camp.

Being that the game was a year-and-a-half ago I don’t remember exactly who won, but I can tell you the tallies. If you know DBA well, please leave a comment after the post about who would have won. Personally, I think Wayne won because he took out my camp. Now, those tallies…

Overall, we both won because we had fun.

Hopefully you enjoyed this DBA Battle Report. It has been a long time since I last played DBA, but it is a fun game when you have good people who can teach you the rules. It has also been a long while since I last saw Wayne.

I have to say that I am really missing getting out for gaming in this new world of Lockdowns and COVID-19. That said, I am doing what I can to keep myself, my friends and my family healthy.

For whenever COVID restrictions get lifted in Kitchener, Ontario, Canada, I want to give a shoutout to Phoenix Games and Hobbies. They have a great historical group that met there once a week before lockdown. They play all sorts of historical games, including DBA. I am sure they will be up and operational again when restrictions lift.