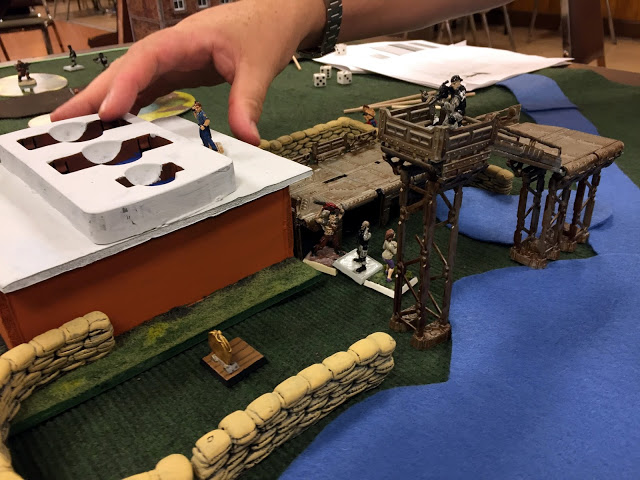 I will admit that my table is not as pretty as the others at the convention, but this is my first Miniatures game in public where I supplied all of the terrain and miniatures from my own collection. Regardless, my players liked the set up and were excited to play. 6 people signed up for this game, which filled the entire sign up sheet. How cool is that!?

This is a game that I wrote about in the past, so much of the background and premise is already available in my previous posts. Essentially, there are two sides. The Cultists and Deep Ones must capture an object and remove it from play. The other side consists of law enforcement officers and some “Outlanders.” Each side had an additional goal on top of stealing or guarding the central artifact. The Outlanders are there to take revenge on the Tiik Baron and his crew for a previous incident. The SWAT Team was paired against the Deep Ones and had to stop the Deep Ones from destroying two specific buildings on the board. The Cops were paired against the cultists and had to prevent the capture of a Scholar. On top of that, there were the complications of Darkness, a traitor on the Cop’s Team and a second civilian that needed to be captured and escorted off the board.

After deployment, the table was looking as per above. I am still relatively new to the game. I have read the rules twice and this was the third Fistful of Kung Fu game that I have participated in, so I apologized to the group in case I got any of the rules wrong. That said, the game is pretty easy to understand with the toughest concept likely being the activation and reactions tests. By early to mid game, all the players were understanding the core concepts well.

Most of the players got to engage in battle, but there was one that never made it to the fight. Below is a picture of Mike’s group. One of his objectives was to destroy the house beside the black car. For the first round, he fired a rifle at the gas tank of the car (hoping for an explosion to knock down the house) and missed. For another turn, he tried getting into a car to crash it through the building. His guys didn’t even get around to turning on the ignition. I think that Mike learned in this game that activating extras on three dice at a time is a good way to lose your turn early. 🙂

Now Mike was not the only one rolling bad for activation. One person rolled three ones for his protagonist. For those that don’t know the rules to A Fistful Of Kung Fu, three ones on an activation make you lose your turn and allows an opponent’s protagonist (gang leader) take up to three actions on a successful reaction test. Protagonists pass the test on twos, so rolling three ones is the worst.

While Mike’s protagonist sat in the corner, the other two on his team pushed their guys to the centre.

With Jill getting the daylights beat out of her by two protagonists, the Tiik Baron losing two of his arms to Goose, the Leader of the Deep Ones no where near the action and the grenade being tossed into the house, the forces of Cthulhu decided to concede victory to the other side.

Overall, it was a really fun game and I hope that my players enjoyed the experience. I asked for feedback after running the game and came away with a few really good suggestions.

One cool thing is that Mike, one of the players at my table, happens to be the man that runs the “Over The Top” gaming convention in Brantford. I went to their Summer Offensive earlier and after this game, he asked if I would be willing to run A Fistful of Kung Fu at his Winter Offensive event in December. As long as I am not busy with other obligations that day, I think I will run it again with the suggested improvements.

As I packed up, I heard one of the guys mention that he really liked trying out the ruleset and now plans to buy the book. At around $20 Canadian, this is a really affordable product that is worth taking a “risk” on. That said, I bought the rules and think that they are a lot of fun and just the right level of complexity for a fun event. I also like that you can use whatever miniatures that you have for the game. Of course, there are the official products by North Star Miniatures, but most of my collection of a suitable nature are minis by either RAFM or Reaper.