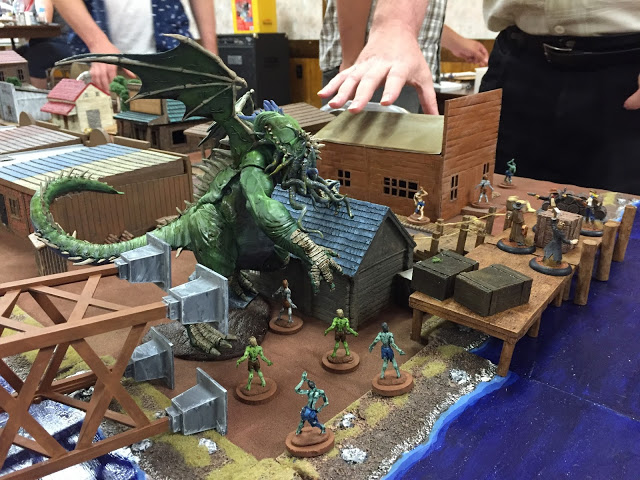 How the West Was Eaten was a fantastically fun game hosted by the guys from 6 Squared Studios at the Broadsword 2 gaming day. The rules are home brewed and our Game Master for the session was Brad. The premise of the game is that the players are all characters in a wild west town during a Zombie Apocalypse. Each character has their own objective to complete and most make it to the docks in time for evacuation. Many of the town residents have been transformed into Zombies and there was a green light out in the sea growing closer. That green light was Cthulhu, but lets check out how the story unfolded.

My Character was Pastor Eli. His objective was to check on his congregation in the church before heading to the docks. All the players started in the same area and the Pastor immediately asked for some assistance from the group to get to the church. It was pretty much every player for themselves, but one player agreed to help. I got initiative, so I went first. The other player went next, apologized and went in the completely opposite direction to look for supplies from the General Store.

Some how, my character ended up way out in front of the group. This is good in someways in that I had make time for a detour to the church that no one else had to follow. It was bad in that I had to deal with some Zombies on my own. Typically I would push them over and run because I had a better chance to push them out of the way than to kill them.

I realize that it looks like my character was the only one in the game. He was not. There were three to four other players. Eli just happened to have his own path the the others did not have to follow. Below are some pictures of the action the other players saw.

I believe that in the end, all of the players reached the boat, but one was grasped by Cthulhu and would never be seen again on our way out of the port. There might have been another player that didn’t make it on the boat, but I am not 100% sure.

The guys put on a really good game and I like their home brew rules. Brad was telling me that they used an adaptation of these rules once for a star-ship boarding game (which sounds really cool) and he let me know about their current project for their next convention game. I will keep that project under wraps as I don’t want to ruin the “wow” factor.

I hope that my readers have enjoyed this game report. Tune in next time when I give a report about the game of A Fistful of Kung Fu that I ran at this same convention.