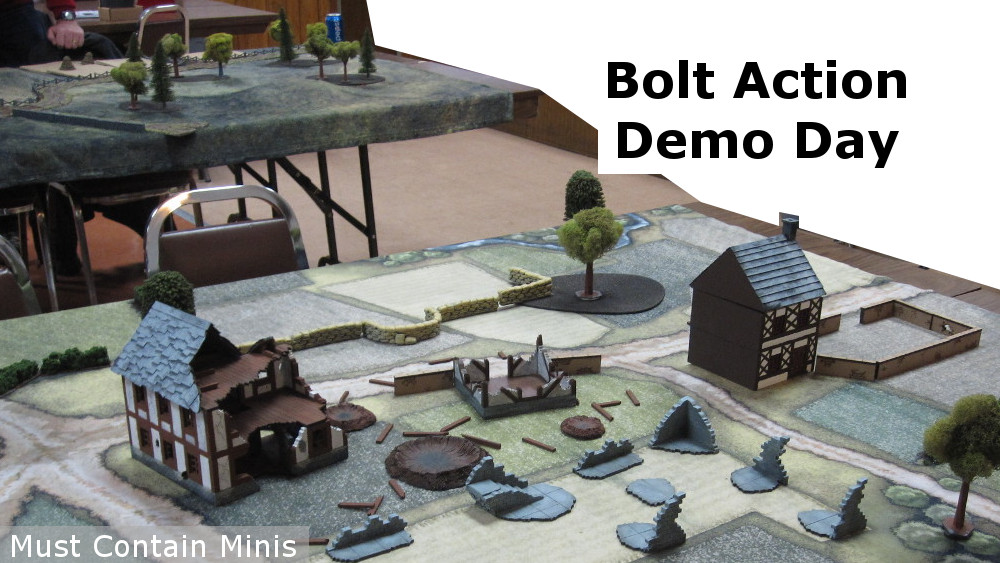 Some time ago, my friend, Dave Lamers, asked me to help run a Demo game of Bolt Action at an event on behalf of Crucible Crush. Not knowing entirely what to expect, I went to help him out. With me, I brought one army, some terrain and a Cigar Box Battle Mat. Dave brought two armies, another Cigar Box Battle Mat and enough terrain to do a couple of tables.

When we arrived, Dave and I went to work setting up two demo tables. A total of seven new players showed to give Bolt Action a try. Dave took four of them to his table and I took three to mine.

Dave ran a scenario from Bolt Action’s Market Garden book. Below is a look at the table. He has a few forested areas, some fields and even some cows! To keep things in order, he also brought along a dice tray. The mission he played was the one from Market Garden where American Paratroopers have to roll out colored panels, beacons and set up Eureka Radars to help the next round of jumpers.

The American Paratroopers in this mission are rated as Veteran while the German defenders are all inexperienced.

The goal for the Americans in this mission was to rush the center of the board and spend a few turns deploying reflective panels to help guide additional Paratroopers.

If I remember right, Market Garden allows infinite range for LMGs and Rifles in this mission. Regardless, the Americans have their work cut out for them.

The Germans fight back hard sending many inexperienced troops into the battle.

In the end, it was the Americans that won this game.

Over at the other table, a different battle raged.

Over at my table, we had a red-on-red battle going. In essence, this was a training mission. Perhaps the two British forces used paint balls for ammunition.  As for a mission, I just rolled one out of the core rule book with the players at the table.

My Demo table for Bolt Action was a little different. Instead of running a Campaign Scenario, I had the players roll for a mission from the core rule book. We rolled Manhunt. In Manhunt, the Defender must set up to half their force in a one-foot radius from the middle of the table. In those units, is the player’s highest ranking Captain (whom the attacker is trying to capture). The rest of their units come on the table in later turns. The attacker must bring half their force on the table during the first wave. More reinforcements come on in subsequent turns.

Below are pictures of the two armies at my table. One is a Regular ranked Canadian force and the other is a Veteran British force. We used all of the rules found in the core rule book, and none of the extra nationality rules in the British Army Book.

With three players at the table, we split one army in half for two players and gave the other army to the third player. This made the game two on one, but it was fair in points. My key goal was to introduce players to the game and get them interested in the system.

The British player would be the defender in this mission.

The Terrain was set up before the mission was even rolled.

The Canadians get preparatory bombardment on the British before the game even begins. This puts a number of pins on the British units. At the end of turn one, the picture below shows the state of the table. As a side note, I will say that I am not impressed with a can of Coke on my gaming mat, but everything turned out okay. The mats are supposed to be washable, but I don’t want to test that out over a spilled drink.  🙂

As I ran a demo rather than concentrating on writing a Battle Report, this post will feature just the highlights of the game. My main goal here was to get other people interested in the game and I achieved that objective.

Overall, the participants of this game all had a great game. I also had a great time teaching people the game. It is something I really enjoy doing.

The British won, but the Canadians still enjoyed the game. These players will likely play again. Thanks goes out to everyone that participated and to Crucible Crush and Dave Lamers for inviting me.