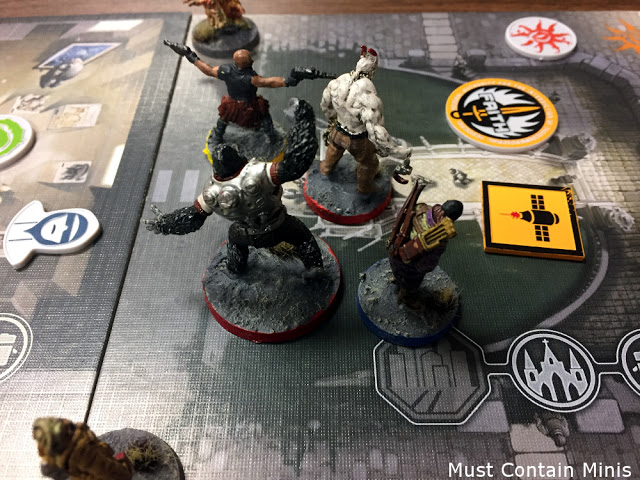 Recently I played the highly anticipated The Others Board Game by CMON. To be honest, I saw this game at the retail level a number of months ago, but only got to play it now at Broadsword 4.

For this game, we had one Overlord controlling all of the evil miniatures on the table and two players controlling the good guys.

Above is a picture of how the game started. I played the big muscle guy with horns (Thorley) and the guy with a bow and arrow (Eagle). The other player played the man in a kilt with two guns and the giant ape (Doc). We played the Haven in Flames mission against Greed and I was delightfully surprised that there were a few objectives that we had to complete in the game.

An interesting note is that our host generally doesn’t buy Kickstarters, but he is very good at picking up the games and expansions after they come to market. CMON is very good at bringing their Kickstarted expansions to retail outlets. Looking at our pictures, one would be right to guess that we played with more than just the base-set of the game.

Below is how the board looked before we placed our characters on it.

Our first objective was fairly simple. Kill four enemies in a turn. As one can see above, there were plenty of enemies to fight through!!! Speaking of enemies, our host, Ryan did a fantastic job of painting all of the miniatures on the table.

Check this guy out. He looks like a Thanksgiving Turkey! He is actually an abomination of Greed!

Right off the top, my characters started killing Abominations, Corrupted Firemen and even a Controller with little issues. The other players characters also rushed into battle, but were less effective.

Thorley enters the battle to protect the “Man in the Kilt” and takes out the Controller. Unfortunately, these enemies re-spawn so this is not the last time that we would see this powerful enemy.

My other character Eagle, then took out two enemies in one turn. Our Overseer did not like that, so Eagle quickly became his new target. He would last just another turn before taking too much damage from enemies and burning to a crisp in a raging fire.  🙁

Being a target, it didn’t take long for Eagle to succumb to his injuries.

The nice thing about this game was that we are allowed to bring in a new character to replace them. When we do this too many times, we lose. My next character specialized in actions rather than combat.

I rushed him out on his own to try and eliminate an evil alter on the other side of town. To my surprise, the Overlord spawned a nasty surprise right next to me.  🙁

My character ran from the newly found enemy and headed back to the core group. There is safety in numbers.

Meanwhile, the other player pushed forward with the “Man in a Kilt.” Being on his own, while partly necessary, was not a wise move.

The next character that would hit the table was named Karl. Karl has the ability to turn into a powerful Werewolf.

I don’t remember what all of the objectives were, but we had completed them in good order so far. Now, an Avatar was summoned to the board and our final objective was to take him out.

This nasty beast now took its place on the board. Over a few turns, it made its way to a room where the Overlord intended to have the final battle. In that room, I already had Thorley and my other character trying to take out a Controller. You can see below that the Controller took out one of my characters. Now it is only Thorley in the room with these two monsters!

Karl then enters the room in Werewolf form.

Yet another Creature would join the battle and things did not look good for our last two heroes. Karl would lash out and hit the Avatar. To win, Karl needs to roll 7 hits with a dice-pool of 5 dice.

He rolls two hits and one exploding wild. Each time an exploding wild is rolled, that result can count as a hit, and the player is allowed to roll again.

To win, all Karl had to do was roll 4 more hits using that exploding wild. This means that he would have to, at a minimum, roll three more wilds and one hit to win the game.

The die is rolled… an exploding wild! Again… another exploding wild! Now we are getting excited! He rolls again, another wild!!! We are screaming in glory. Just one more hit and we win this game!!! In what felt like an impossible task, he rolls a hit!!! We win!!!

We were screaming with excitement and having a blast!

Unfortunately for us, the Avatar also killed Karl, but Thorley remained so our Host gave the victory to the players!

To be honest, I don’t remember if Doc (the Ape) was off doing his own thing on the board or already defeated by the Overlord, but Thorley was the last character standing in this battle. 🙂

We end the game with Thorley being the sole survivor. Doc might of also survived, but I don’t 100% remember because Doc spent the game off doing his own thing.

Overall, I had a blast with this game. The game itself came across as simple and fun.

Combat rolls and Activity rolls are completed using the same dice and different faces indicated successes for different actions. Each character received 5 health and when damage was taken, players could allocate how to take it on their player card (pictured below).

The top row is Thorley’s mental state. As it goes up, he can choose to take a corruption and receive the benefits below. When he takes damage, he places a heart on one of the possible benefits. That benefit is no longer available if he takes corruption.

If Thorley were to have 2 corruption, he could take one more corruption (to increase his count to 3) and take the benefits below for one combat roll. With the card above, he would receive one free defence and one extra combat die.

The card also shows how many dice he gets for combat (4), other actions (2) and that he naturally gets 3 defence. Each character also has a separate special ability. Thorley, for example, is a Protector.

While players take wounds, to kill an enemy, enough damage has to happen to overcome their statistics in one hit. The damage does not carry over from fight to fight. A general observation that I made was that the monsters got a better advantage from staking figures in a room than the players, but the players tended to be a little more powerful than the Abominations and Acolytes.

If the opportunity came to play this game again, I would take it. The game itself has a feel a little like Mansions of Madness in that you have to worry about both your sanity and your health and in the fact that the game feels hopeless. I don’t think it is a game where the players would win often.

Ryan, the gaming host, did such a good job painting his The Others collection that I want to end off by showing more of his painted miniatures.

Simply fantastic work!!! Thanks for bringing this out to Broadsword Ryan. It certainly feels great to play a cool board game with very well painted miniatures!

If you know of someone, or are someone, with a product that you would like to see on Must Contain Minis, please be in touch with us at [email protected].

RAFM Deep Ones Review and Showcase