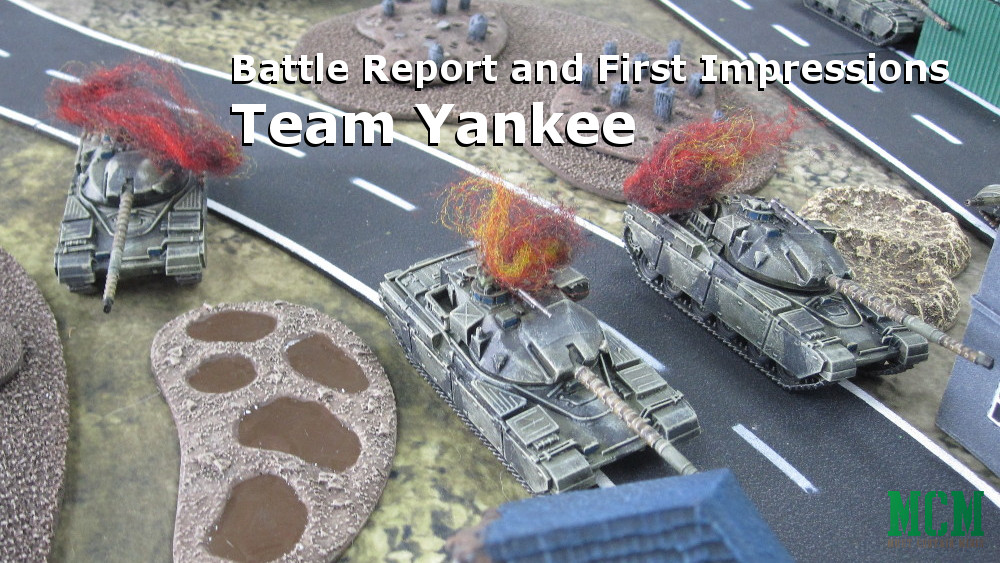 Some time ago (at Council Fires 2018), I gave Team Yankee my first try. Today’s post is a Battle Report of that event and a first impressions review of the system. For those that don’t know, Team Yankee is by a company called Battlefront. They also make Flames of War (FoW).

Back to the game at hand, I finally gave the game a try and I was impressed with how much fun I had with the game. Please note that this battle took place in October of 2018. I have a bit of a back log of photos and reports. 🙂

To begin, I had the choice between Russian, American and British forces. I chose to play as the Russians.

The objective is to take over your opponents objectives while defending your own.

Both sides took plenty of tanks with no infantry. To keep things simple for the demo, no side had air cover. The organizer set this game as a straight tank on tank battle with a few lighter vehicles here and there.

A Thorn in my Side

The Americans and British had fewer tanks than me, but they were more powerful. That group of four tanks in the forest proved very effective against my horde of tanks.

My answer to this problem was simple – a parking lot full of tanks!!!

Not as good of an answer as I hoped.  😉  The battle continued.

Duel of the Heavy Tanks

Looking at the full table, you can see that I have plenty of more tanks on the field than my opponent.

My opponent brings up some tanks to take on my parked firing line.

Making for the Objectives

Although the costs were high for me, I continued to push towards my opponents’ objectives. Below, you can see the state of the table at this point in time.

Meanwhile, my opponent made his final push towards my objective.

I will admit that I have been a 3rd Edition Flames of War hold out. Why is that? Simply because there are so many rule-systems out there that I explore, that I did not feel the desire to go back and learn a new way to play the game.

Once I got playing this game, I thought “why haven’t I tried this before?!” The game was fun and fairly easy. I wasn’t sure if I would like it, but I really did. Now, I know that I am talking about Team Yankee, not Flames of War v4, but the two games share the similar core rules. Having fun with Team Yankee makes me think that Flames of War 4th edition would be enjoyable too.

It was fun. The system was faster than version three and not having to look up the rules so much is a huge benefit. That said, anyone that states that the game can turn into a parking lot of tanks would be correct. While that happened to a certain extent in this game, I don’t know how infantry, air and artillery would mix up the game. My assumption is that air and artillery would act as a deterrent to parking your tanks so close together.

I am mixed about the cards. I like that they were there to reference and it eliminated flipping back and forth in a book or referring to a list. While I like having the information there and in front of me, I don’t think they are required for the game. That said, they certainly made things easier.

The concepts from the old game (version 3 FoW – such as bails, bogging and even the combat system) are all here. Albeit, some of it is in a simplified version. I don’t think a simplified version is a bad thing. When I was a tournament player (playing only Flames of War v3) I found I had to flip around the books and errata a lot. I don’t think that would be the case with fourth edition or Team Yankee.

Although I have wrote about Team Yankee before, this is the first time I actually got to play the game. That said, I have read through the ‘NAM book and liked those rules (which are essentially the Team Yankee rules treatment of the Vietnam War).

The game was a lot of fun, and it felt really good to be the victor. My secret was an aggressive advance right from the start of the game to keep my enemy a step behind. They can’t push forward with a good attack if the enemy is too busy reacting to your actions.

Special thanks goes out to James Whyte for running this game. I had a good time at his table. Thanks also goes out to Lee VanSchaik of Crucible Crush for organizing Council Fires 2018 (the convention where I played this game).

Hopefully you enjoy the stories on this site. I just wanted to remind my readers that I cover the costs of this site through commission sales on Amazon and DriveThruRPG. If you buy anything from those sites after going there from a link on this site, I get about 5% of the purchase price to help cover the expenses of this website.

Interesting enough, the connection to DriveThruRPG works for its sister sites too. That includes the Wargame Vault and a number of sites with banners below. If you ever want to buy something from there, you can help this site out by using the links below.