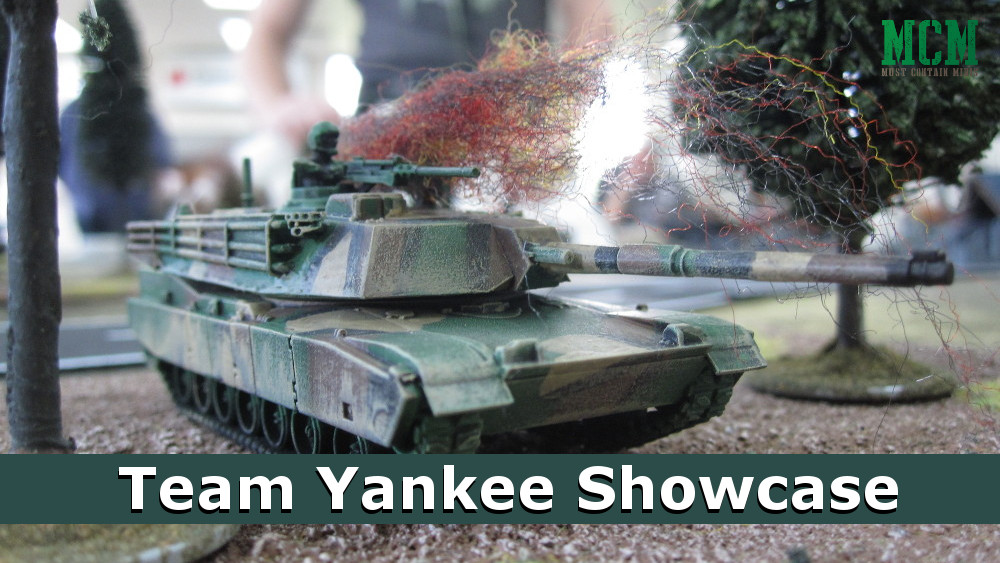 In my previous Team Yankee post, I outlined my first battle and gave my impressions on the game. To keep the report on the shorter side, I didn’t bother with the “eye-candy” pictures. Instead I decided to make the article into two separate reports. This post takes a look at the cool pictures that didn’t make it into the Battle Report.

For those wondering, I took these pictures at Council Fires 2018 (an event organized by Lee VanSchaik of Crucible Crush). The miniatures in this post belong to James Whyte. He did a nice job painting them up. Now, let’s take a closer look at this Team Yankee painted miniatures showcase.

The first image I want to showcase is something a little unique (at least to me). This is the Swingfire Missile Vehicle, a vehicle I had not seen before. It is a British missile launcher with a very wide field of fire.

This light British Recce Vehicle happens to be fast and maneuverable. It’s purpose is to learn the enemy’s movements and to hunt out lightly armoured vehicles.

The Abrams is the big American Tank that is king in Team Yankee. This tank is big, powerful, fast and well protected. If you need proof of how powerful it is, see what it did to my row of Russian Tanks in my Team Yankee Battle Report. If you see it on the battlefield, you are in trouble. It is a good thing that this vehicle costs a lot of points in Team Yankee.

The tanks in this Team Yankee painted miniatures showcase article look pretty cool. James Whyte did a nice job painting them up for his demo table. Now, James does more than demo this game. He is also very active with the Team Yankee gaming community in the St. Catherines / Niagara Fall area of Ontario (Canada).

I know he used to also do commission work, so if you like these pictures and want some tanks painted up, look him up. He might be able to help you out.

If you want to see these tanks in action, be sure to check my Team Yankee Battle Report.

Work In Progress – Showdown at Retribution