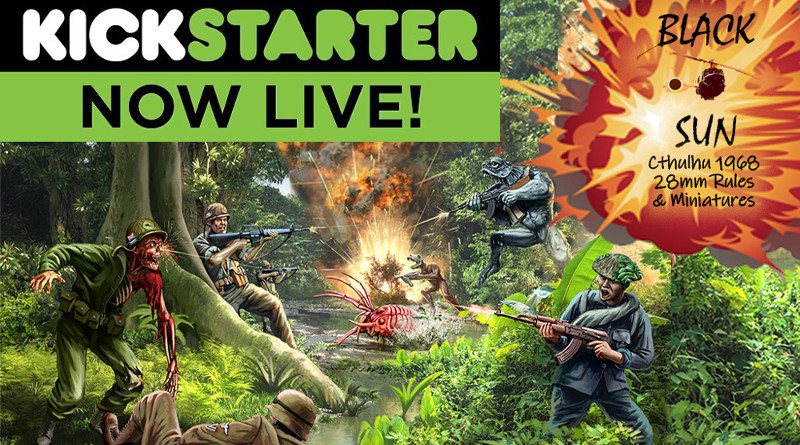 As many of my readers may know, I love miniatures of Deep Ones. Crucible Crush is now heading to Kickstarter later today (Tuesday, July 9th, 2019 at 12pm EST – links are now Active) with Black Sun. I will update this post with the correct links later tonight.

Update: Please note that this post has been edited to include links to the Kickstarter project.

This is their second time around, but the first time, they were on their way to make goal, but the pulled the project because they wanted to have more items to preview during the Kickstarter. I must say that concept wise, I like what I see here. For historical gamers, you have nice lines of 28mm Vietnamese and American Soldiers from the Vietnam War. For Sci-Fi players, they have Bug Creatures and Deep Ones. As mentioned above, I love Deep Ones and this Kickstarter has them!

As a note, all of the images in this post have been supplied to me by Crucible Crush.

Of course, this game also features historical miniatures. If you are strictly a historical player, you can ignore the Sci-Fi minis all together. I, however, will be looking at both the historical and sci-fi components of the game. Check out this picture though. These minis would be more than appropriate for either Black Sun, or your favourite Vietnam War rules (in 28mm).

Combining the Historical with the Sci-Fi

Both American and Vietnamese soldiers have crossed through a portal and now face enemies unknown. These enemies include Bugs, Deep Ones and even Undead Golems.

Crucible Crush set various levels that you can pledge to the game. If you want, you can go all in with the game. I chose to show this level as it gives you an idea of the entire range that will be available for the Black Sun World. Price-wise, you are looking at $268 Canadian for everything. That is about $205 American with today’s (July 7th, 2019) exchange rates.

From my other posts, you may already know that I am a fan of Cigar Box Battle Mats. This Kickstarter even has one of those. Cigar Box Battle Mats will be developing the official Black Sun play Mat. I can attest that their quality is outstanding from my experience with their other products.

Hopefully you enjoyed this preview of the Black Sun Kickstarter Campaign. I will go through the post later today to add in links to the campaign.

Oh, by the way, if you pledge within the first 48 hours, you can get this early bird model added in for free to your pledge level.