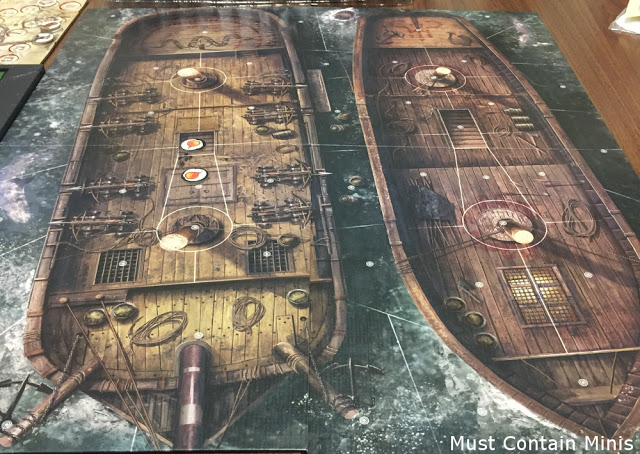 The last time I played Conan, we played In the Clutches of the Picts, and I had an absolute blast! At Broadsword 4, I got to play yet again – but this time, I played as a Player rather than the Overlord.

Our host, Michael, is a man that I enjoy chatting to each time that I see him at a convention. When he pulled out his Conan Collection, it was clear that he had a Kickstarter copy of the game rather than the Retail version that I own. That means that we got to play with characters not available in the base game. My character for this game was Pallantides. Pallantides made for a great “tank” and “fighter” style of play experience.

Michael set up the table for us and everyone was very excited to play. In fact, there were 7 of us at the table. Being that this is a Convention Game, Michael modified the rules to allow 6 players rather than capping the mission at the normal 4 characters.

I took the first action of the group and moved forward to open a near by treasure chest. It contained a crossbow. Being that my character is a melee tank, I left the crossbow for someone else to pick up.

Shevatas decided that he would be the one to take the crossbow. He moved to my spot and picked up the weapon.

Shevatas quickly aimed the crossbow and fired on Zaporavo (putting every crystal he could into making the best shot he could make). My goodness!!!! What  a result! Seven hits!!!

Not wanting to see the game end so soon, Michael put tons of Overlord Crystals into dodging this attack. Zaporavo barely survives the incident, and Michael found himself fairly drained of crystals for the first turn of the game.

On the next round, Pallantides and Shevatas moved into combat with the near by pirates, while Conan helped Belit. Our Wizard and Archer decided to stay on the bow of the ship and take shots at near by pirates to no real effect.

This round we would take a lot of fire from the enemy’s archers. The next round, I would move in to help protect Belit. Belit was pretty good at defending herself so my moving there was unnecessary.

Having focused so much on Belit’s safety, the Overlord saw an opportunity to try and take out our ranged fighters that we left behind on the bow of the ship.

Meanwhile, Skuthus turned himself into a demonic beast!

The next round, we would consolidate our ranged fighters to the middle (and stern) sides of the ship. Pallantides hung out with the middle group to help shield them from incoming attacks. Meanwhile, Conan rushed in to take on Zaporavo and his henchmen.

Conan actually managed to take out three of the pirates on his own, but Zaporavo still stands. Pallantides then rushed in to help Conan…

With Zaporavo dead, the players win this game of Conan!!!

Overall, I had a lot of fun playing this game and was it ever nice to get to play as a Player rather than as the Overlord (in most games like this, I usually am the one that ends up as the Overlord).

Michael did a great job at hosting this game and I was very happy to see him at Broadsword 4.