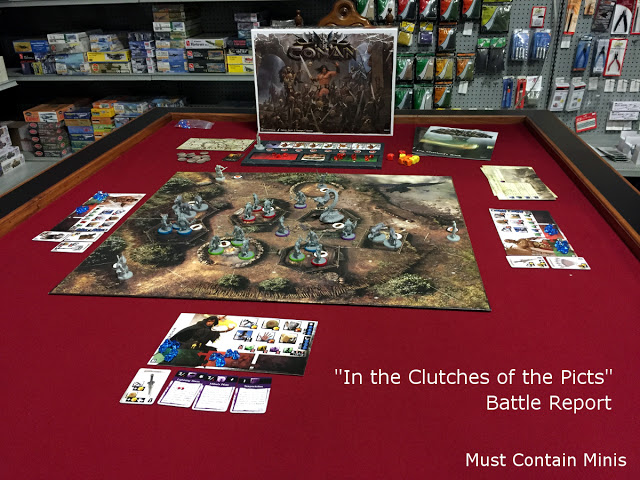 This past week, I took my copy of Conan to my favourite “Friendly Local Gaming Store”(Forbes Hobbies in Cambridge, Ontario, Canada) and ran a demo game. What an awesome time I had! Thanks goes out to Asmodee for sending me this copy of Conan.

When I set the game up, it was well received and several people expressed interest. The store was packed and there was a Magic Tournament in the back with many players present. It was a little harder to find people to play (than to just look at the game) because everyone was busy with the tournament or just coming for a quick visit. Many of the interested people did not have the 90 minutes to try out the new board game. That said, Tyler answered the call fairly quickly.

After a few minutes with just one person volunteering, I decided to proceed with just Tyler and myself. This situation immediately tested one of my concerns about the game. That concern is that all of the scenarios are for a designated number of players. The one that I set up to demo, “In the Clutches of the Picts,” is intended for 4 to 5 players. I only had two. Of the nine missions in the book, only one is meant for two players – and that was not the scenario that I set up. To solve this issue, I allowed Tyler to control all three characters. The game worked out great this way!

Above is how the table was set up. In this scenario, the players win if they kill the leader of the village (Zogar Sag) and take his head. They also have to rescue a Governor’s daughter and escort her out of the village. That daughter is located in a hut as secretly selected by the Overlord (played by me). The Heroes enter the village separated on three corners of the map. They lose if they do not complete the objectives by the end of round 8.

There are Picts, Hyenas and even a Giant Snake in the huts. Having traveled for a little while to get to the village, the Heroes start with some of their energy depleted. To start, Tyler decides to activate Shevatas. One of the beauties of this game is that the players can activate their heroes in whatever order they want until they deplete their Crystals.

This game was a ton of fun, and I am very glad that I brought it out to play at my FLGS. Tyler also had an excellent time despite losing. Usually I do not play so hard against first timers, but I figured I was a first timer too so the gloves were off. I also would not have picked on just Conan so much if there were other players present at the table. Tyler was an excellent opponent in that he wanted to finish the game even when it was not looking good for his Heroes. Not once did he throw in the towel. I admire such perseverance.

A suggestion for beginning players is to take the time to search the chests for treasure. There were multiple items in them that could have helped the players out, but because they did not take the time to investigate the contents – they were stuck with their beginning equipment in the big battle against Zogar Sag.

One concern that I voiced in my unboxing of Conan still exists. That is that the cover of the Heroes’ Book has a picture of a half-naked woman on the cover. I worry that this image might offend some people that check this game out when I take it out of the house. Despite this concern, I decided to run a demo game anyways. There were two instances in the day were I was a little conscious of having the Heroes’ Book out on the table. One when a young kid took interest in the game and the other when a family was checking it out. Throughout the day I kept the Heroes’ Book face down and did all of the rules referencing myself. This concealed the artwork. For many people, this issue will not be as much of a concern. Many people play games in the privacy of their own homes. I, on the other hand, had this game out at a public place with lots of customers. No one voiced any concern or offence throughout the day, which was something I was happy about.

Overall, I had a fantastic time running this game at my favourite FLGS. I was really impressed with how the game flowed and really liked the “Crystal / Gem” and “Overlord River” mechanics.

I hope that everyone enjoyed reading this Conan Battle Report.