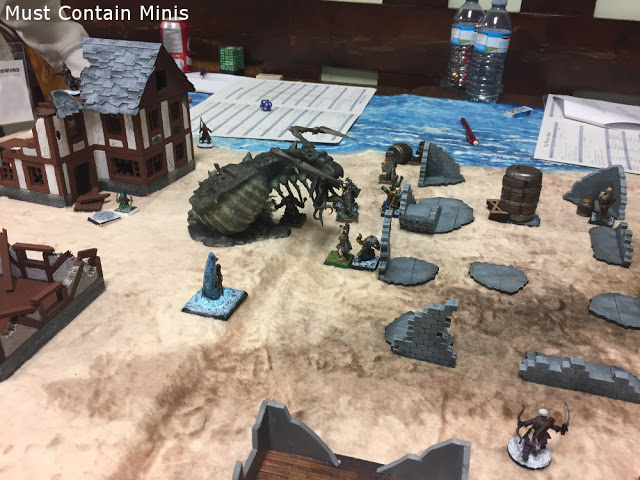 This past weekend, I had the pleasure to attend the Broadsword 4 Convention in Hamilton, Ontario. It was an enjoyable event, and there I ran another demo game of Frostgrave.

For this game, I gave players access to the same six warbands as what we used for Broadsword 3 and Hotlead. For those interested, below are quick write-ups and pictures of those warbands. All of the Wizards are level 20.

I modified the Worm Hunt scenario from the core rule book for this event. Players received no points for killing each other, but received points for carrying treasure off the board, killing wandering barbarians, killing Giant Worms (there were three of them), killing an even bigger Worm and killing a Ginormous Worm. Double points are awarded for “controlling” a creature and walking it off the board. For statistics, the Giant Worms counted as Giant Worms, The Bigger Worm (which was my Frost Wyrm) used the statistics of a Giant (but counts as an Animal), and the Ginormous Worm used the statistics of one of the named demons from Forgotten Pacts.
In anticipation for Frostgrave: Ghost Archipelago, I changed the setting from a frozen wasteland to a beach front using my new Double-Sided Cigar Box Battle Mat.
To get the mat this size, I folded it in half and we decided that the ocean part of the mat was impassable terrain. If you are curious about the terrain on this table, please check out the terrain section of my Reviews Page.

Now, let’s get on with the actual game.Four players came to join me on this adventure, and they each selected a Warband. At the table, we had a Beast Crafter, a Summoner, a Thaumaturge, and a Necromancer.

Immediately, each group rushed to the nearest treasure markers to investigate whether it was treasure or a Worm. We used barrels as treasure markers this time. The players found the Worms very early in the game.
It was the Thaumaturge’s Warband that stumbled upon the Ginormous Worm. This creature had an effect of slowing down time, so everyone within a foot lost an action per turn.
While the Thaumaturge found the worm, it was the Necromancer’s party that killed the worm. His ranger hit the worm hard with a critical strike from his bow and arrow. Immediately, one of his spell-casters followed up that attack with a powerful Bone Dart, killing the beast (thereby stealing all of the points for killing the Ginormous Worm).
The Thaumaturge then used his next turn to investigate the second large creature marker.
Else where on the table, 12 barbarians enter the battle. Three from each of the players’ deployment areas. Not a good thing for the Necromancer’s warband who had a skeleton nearly leaving the mat with a barrel of treasure!
The game continued for just a little longer. At the start of the game, it was stated that anyone that “mind controlled” a worm or took it over with the proper “control” or “bind” (the Ginormous Worm counted as a Demon, the others as Animals) and walked the creature off the table would get double points. The Beast Crafter managed to do this with one of the Giant Worms.
Unfortunately, we came to a point where two of my players had to leave. Below is how we ended the game.
The Necromancer won the game for killing the Ginormous Worm. The Beast Crafter scored second for walking a Worm off the table.
Overall, I had a lot of fun hosting this game. One huge complement that I got from one of the players was that this was the best game of Frostgrave that he ever played. That was very nice to hear.
I hope that everyone enjoyed this quick report of the Frostgrave game that I demoed at Broadsword 4. Thanks goes out to Osprey Games for being such a big supporter of the site and to Cigar Box Battle for sending me a preview of their Double-Sided Kickstarter Gaming Mat.It was a pretty neat to take a product currently on Kickstarter to a local gaming convention. In fact, we used both sides of the mat! My buddy, Dave, ran a Bolt Action table before my game and all we had to do was flip the mat over and add slightly different terrain to make it go from a World War Two town to a Frostgrave: Ghost Archipelago type setting.


Until next time, Happy Gaming Everyone!!!