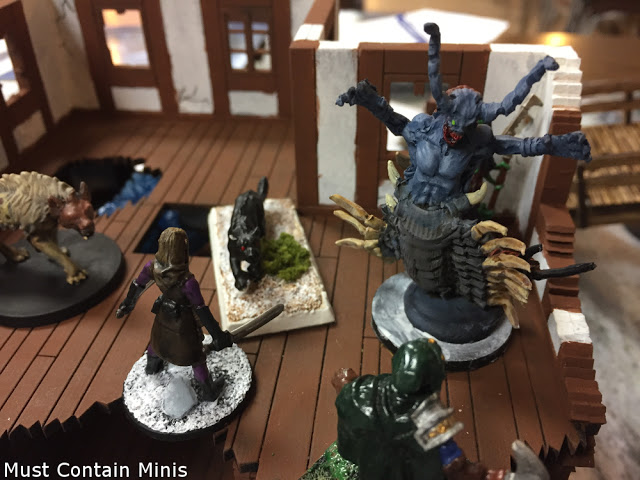 At Broadsword Three, I hosted yet another game of Frostgrave to a new group of players. For those that read my report about Frostgrave at Hotlead, I ran the exact same scenario there but this time, things went differently. This time, the Major Demon Tiszirain was actually summoned!

For the demo, I ran the “Rescue the Prince” scenario from Forgotten Pacts. Just like last time, I gave each player two secret objectives to complete for extra points (kind of like a homemade version of Ulterior Motives). One player (the Summoner) got extra points if he personally summoned Tiszirain and even more if he controlled Tiszirain and walked him off the board. Another player (the Necromancer) got points if Tiszirain was summoned by the Barbarian Wizard or Summoner. Two players got points if the prince was rescued and carried off the board (the Enchanter and Thaumaturge) with extra points if they were the ones that actually carried the prince off the board. The Beastcrafter was Neutral. He got extra points if anyone rescued the prince, or if he gained temporary control over Tiszarain.

I set the table as in the picture below and predetermined the deployment areas of each warband. I kept the areas secret until the players selected their wizards and then allowed them to deploy simultaneously. All of the Wizards in this game are level 20.

As far as all players are concerned, everyone wants to save the prince and prevent the Demon from being summoned. No one knew that the Summoner and Necromancer were working against the goal.

To save the prince, players had to kill the four Chilopendra Demons to take down a force shield and kill the Wizard hiding within the ruined house. If they do this by turn 8, the demon would not be summoned.

All the players made a mad dash for the middle right off the top. The Enchanter and Beastmaster chose to focus their attacks on the Thamaturge crew while the Summoner focuses on the Enchanter and Barbarian Wizard (the one sacrificing the prince). It is a bit of a free-for-all as all players want to save the prince (except the Necromancer).

The rush to the middle is frantic and the Summoner gets up there first. His speedy captain one-hit kills the Barbarian Wizard and his Wizard teleports to beside the prince. Everyone breaths a sigh of relief that the Barbarian Wizard is dead, and none of them realized that the Summoner was planning to Summon Tiszirain himself the next turn. Regardless, all of the players turned against the Summoner because they wanted to be the ones to carry the prince off the map.

At this time, we are getting pretty close to the time limit of the game. We allow one more round before calling it a night. All of the players went for their secret objectives and kill points instead of the treasures so the Necromancer, Summoner and Enchanter were in the lead at this time.


Seeing an opportunity, the Beastcrafter runs up and attempts to control the Demon as well. He is successful!

Overall, it was a fairly successful demo. I had an enjoyable time and so did the players at my table.