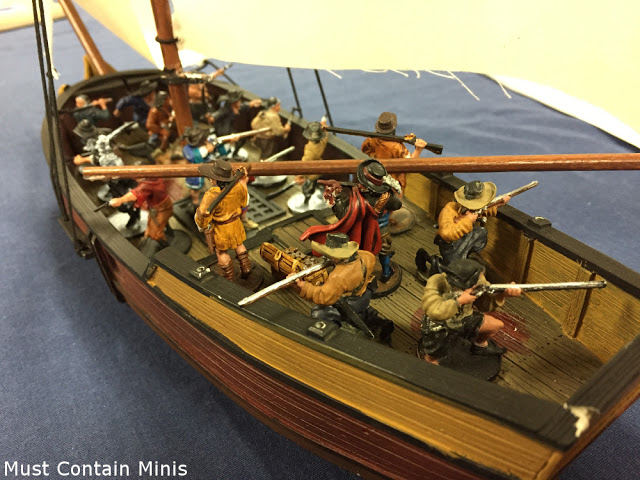 May 6 (2017) marked a day that I was looking forward to for several months – the Broadsword 3 gaming convention in Hamilton (Ontario, Canada).

Just before the event, I was worried I wouldn’t be able to make it as we received tons of rain and several communities were subject to floods. The day came and I went anyhow. What a great time I had! Barnaby Ore, the convention organizer, did a really fine job at putting together an enjoyable event. Over 100 people made it out despite the rain and flooding in some regions.

Check out these other pictures from the event!

So, what games did I play at Broadsword 3?

As soon as I arrived, I eagerly signed up for Gotham Nights, a Home-Brewed game by the guys from Six Squared Studios. Unfortunately, the guys were running late due to some localized flooding, so I was not able to play the game this time around.

Instead, I played DBA.

Finally, I got to play Blood & Plunder by Firelock Games for my first time. This game I was very excited for and was very happy to see someone running it at a local convention.

Unfortunately, we did not make it all the way through the demo as we had to leave and prep for our own gaming table.

Blood & Plunder is a game that has captured my eye ever since it was first kickstarted and it was really nice to try it out. The game doesn’t appear to be too expensive to get into and I hear that Firelock will be taking it to Kickstarter again soon – perhaps there will be some further deals there. This is certainly a game that I would play and write about, if I were to own it. I think Blood & Plunder would make for some really sharp looking Blog Posts.

Check out how awesome those minis and ship look! Wow! This game looks fantastic.

As for my official opinion of how the game plays, I would have to play it a few more times and go through the rules before coming to a conclusion.

After playing DBA and Blood & Plunder, I set up my own game of Frostgrave. This time, I ran the game on a 3.5′ by 5′ table rather than a 5′ by 5′ table like I did at Hotlead. There will be a Battle Report for this game in the future.

Outside of playing fantastic games, I also visited the vendors. I bought some cool new fences from Six Squared Studios and a plethora of miniatures from RAFM.

Until next time, Happy Gaming Everybody!!!