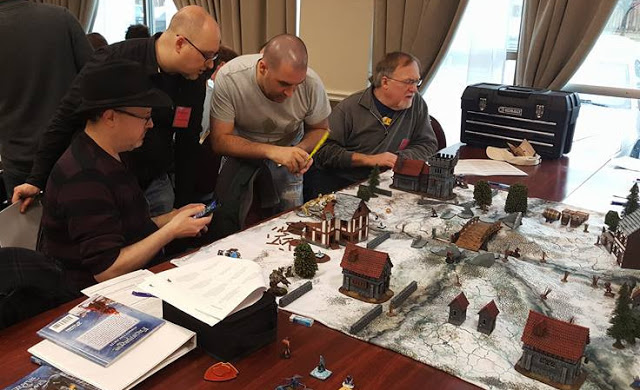 What a fantastic time I had running two demo games of Frostgrave at Hotlead 2017. This post is a retrospective on those games and a thank you to my sponsors. To start, I would like to show off five pictures sent in to me by a friend and reader, Randall Carder. Thank you for sending these pictures. Check out the engagement at the table in the first image!

The table itself looked absolutely fantastic!

Running a game at a Convention is nothing new to me. My games at Hotlead are the third and fourth games that I have run at conventions. The first game I ever ran at a Convention was Mansions of Madness. The second was A Fistful of Kung Fu. The people at my Fistful of Kung Fu table enjoyed themselves, but I wanted to show the difference in table quality between that game and what I ran at Hotlead 2017. Check out these pictures.

The Fistful of Kung Fu table certainly was functional, but has nowhere near the same appeal as the Frostgrave table that I just ran. Check out the table below. It is absolutely gorgeous and a large part of that is due to corporate sponsorship and some help from some friends.

On top of those companies, Jeremy Cada of Forbes Hobbies in Cambridge (Ontario, Canada) helped Must Contain Minis by painting up the Chilopendra and Tiszirain Demons for the table. My friends Dave and Randall also provided some terrain to help fill the table. With this help, I had a stellar looking table.

As a thank you to all of the companies that have helped Must Contain Minis along the way, I made an effort to include each of them somehow at the demo table. The only company that I could not work into the event was Hyacinth Games (the makers of Wreckage).

From Asmodee, I used miniatures from the Conan Board Game as a Warband and used Conan himself as one of the Barbarians. The gaming Mat came from Cigar Box Battle and I used the scenery from RAINN Studios‘ Battle Pack as spell effects and as a back up plan for ruins in case Dave and Randall could not make it to the convention with their terrain.

I also included several products from companies that have not sponsored Must Contain Minis. That includes multiple scenery elements from Six Squared Studios (craters, barrels and a Huge Keg) and Warbands with Miniatures by Reaper Miniatures and RAFM Miniatures.

To determine the winners, I developed my own modified scoring system. In this system, points were given for normal conditions that would give Wizards Experience in the scenario. On top of the rewards available to all players, each Warband had their own hidden objective worth points if completed. The scenarios played included Mortal Shells in the Afternoon and Rescue the Prince in the Evening.

For the Afternoon game, some of those hidden Objectives included controlling a specific opponent’s warband members through the use of a Control Construct or Control Animal Spell, Walking Demons off the board through the use of the Bind Demon spell, or killing creatures (or warband members) on the board with specific spells. The Evening’s game also had specific hidden Objectives, but I will not disclose them at this point as I plan to re-run that scenario at Broadsword 3.

In Mortal Shells, the Players must read the ruins written on the walls in the middle of the table to gain the most amount of points. The game was set to run until we either ran out of time, or two of the six warbands left the board (either by elimination or by walking off). Aside from two wizards who got extra points for killing creatures (and warband opponents) with specific spells, all point incentives to kill Wizards and Apprentices were removed from the first game. I didn’t want players going for player elimination right away.

In the end, it was the Necromancer Player that won this scenario by points. In the evening’s scenario, things were different. In the evening games, the gloves were off. Wizards would now gain points for killing enemy Wizards, Apprentices and Warband members. In their secret objectives, I purposely set specific Warbands against each other – but to my surprise players found other reasons to attack each other.

The scenario this time was Save the Prince (also from Forgotten Pacts). In the middle of the table was an evil wizard preparing a sacrifice to raise an evil demon. This game timed out, so I will be sure to play this one on a smaller surface at my next convention. Regardless, my players had fun. It was the Enchanter’s Warband that won this scenario.

Unfortunately, this is about where we ran out of time. Tiszirain was not summoned, but the prince was never rescued either so no one got points for preventing the Demon from being summoned. The enchanter completed one of his two hidden objectives and won on points based on that.

I hope that everyone enjoyed reading this article about the Frostgrave games at Hotlead 2017. For those that want more background information on this game, below is a list of related articles.

For those interested in more, I ran the last scenario at Broadsword 3 with a different result. Tiszirain was actually summoned!!! Check out the Battle Report!