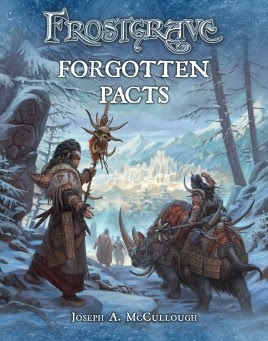 Forgotten Pacts for Forstgrave is a book that I have been excited about for a very long time. The artwork on the cover captures my imagination and everyone knows I am a big fan of Frostgrave. In the interest of full-disclosure, I do want to say that I have two copies of this book. One, Osprey Publishing sent me for Review and the other I bought through North Star Military Figures. There is nothing wrong with owning two books. Now I have one for a friend to use while we play.  🙂

The biggest change to the rules in Forgotten Pacts is the addition of the Advanced Summoning Rules. These rules apply only to Demons summoned “Out of Game.” Demons summoned during a normal game still follow the old rules. With these rules, Demons summoned “Out of Game” may come with randomly determined Demonic Attributes. Most of these attributes make the Demon stronger while a few (like Uncontrollable) add an element of risk to summoning these dark creatures. There are 20 Minor Attributes and 20 Major Attributes. Summoned Demons may have 0 to 3 of each type of attribute.

As the game goes on, Wizards may make Pacts with Demons for extra powers. This is similar to becoming a Lich in Thaw of the Lich Lord or a Beast Master in Into the Breeding Pits. By forging a Pact, the Wizard must select one sacrifice and gets one boon in exchange. Sacrifices include a Blood Offering before every match, Tithing to the Demon, leaving a minion at the base to Worship the Demon and other options. Boons include getting a single dice re-roll every game, gaining power to capture demons in a jewel to later use as a bonus to casting power, plus other options. One option that might capture the interest of many readers is to give their spell caster a Minor Demonic Attribute. For me, this option is a little too random – but I could also see this boon being right up the right alley for other players.

Included in this book is a spell to summon a Demonic Servant that can help you summon Demons and four new Soldier types. The four soldier types include the Assassin, Demon Hunter, Monk and Mystic Warrior. All of these Soldier types are compelling to me, but there isn’t any power creep here. A Knight or Barbarian from the base book are still very competitive. Personally, I like the Assassin and Monk the best of the group, but thematically – I think there is good call for the Demon Hunter and Mystic Warrior. Perhaps, I would even couple one of the new Soldier types with a Mystic Brand.

Mystic Brands is a new Sigilist spell that materializes itself in the form of tattoos on the person that it is cast. These markings add benefits to the model. These benefits may be sacrificed for a special one time boon. A Brand may be made either Aggressive or Defensive. The Defensive ones give a bonus to Will Power plus another benefit while the Aggressive ones risk going berserk and being treated like an uncontrolled creature for the rest of the battle. How much would that suck to lose a prized Barbarian to him going Berserk with blood rage and turning on his own guys? This spell, I really like. Tattooed Barbarians (along with other Warrior Types) will likely make it into my future Warbands.

Also in the book are eight Missions spread across two mini-campaigns and two separate Scenarios. These missions are all fairly cool and you can watch me play through the first three through the links below…

As a side note… The enemies in Forgotten Pacts are tougher than they are in other books. I would recommend that players take higher level Wizards on these adventures.

The bestiary for Forgotten Pacts includes several specific Demon types as well travelling tribes of Barbarians. The latter one, I am a big fan. I had a lot of fun in games where Barbarians entered the field as small warbands hunting down the Wizard’s crew. This book also recommends (as an optional rule) that wandering Minor Demons can be given one Minor Demonic Attribute while Major Demons can be given one Major Demonic Attribute. With 20 different Attributes in each category of Demonic Attributes (Major and Minor), there is a lot of variety of what creatures will come to the battle.

Overall, I really like this book. I have seen some criticisms on the Internet that the demons are too unique. At the same time, I have also seen criticisms that the other books offer creatures that are too generic. I am okay with the bestiary in this book, but I could see the randomness in Demonic Attributes drive some “What You See Is What You Get (WYSIWYG)” gamers nuts. Add to that randomness, the fact that not all of the named creatures in this book have models yet and gamers will have to do some thinking of how to model their figures. Overtime, North Star Military Figures will likely release miniatures for the bestiary in the book, but in the meantime either proxying or using some imagination will be required to run through all the missions in this book. On the flip side, Osprey has also released a number of Demons and Characters that are unique to this book. It gives a nice opportunity for modelers to work on something different.

Another thing that I would like to mention is that some of the Internet Hype websites looked at the Cover Image for this book and published that there would be rules for mounts in this expansion. That is not the case. There is a picture of a Barbarian on a Woolly Rhinoceros on the cover, but there are no rules in the book for player mounts. That character is Kornovik, the Barbarian Outcast. He is used in one specific scenario and can be rolled as a “Wandering Creature” encounter on the Barbarian table. To represent that Kornovik on his mount, he is given some extra rules and both him and the mount are treated as one entity.

Forgotten Pacts is a fun read and well worth the investment for anyone that likes playing as a Summoner or wants to play new missions suited to higher experience levels. I personally like the Mystic Brand spell, but am less of a fan of the Demonic Attributes. For me, the Demonic Attributes add randomness to model selection when I want to choose miniatures that are close to WYSISWYG and hand-pick exactly what is in my Warband. I could totally understand people with an opposite opinion from mine. For some, this randomness could add excitement to the game and really engage them on the narrative side. I can just hear the war-stories now… “hey, do you remember the time that I summoned that two-headed chameleonic Demon that I thought was under my control until he turned and wrecked havoc on my wizard and his accompanying guards?” It certainly does make for some interesting post game stories. 🙂

I hope that everyone enjoyed this Review.

Must Contain Minis has a Sales Affiliate Relationship with Amazon, RPGNow, DriveThruRPG, and the Wargame Vault. This article includes affiliate links. If you visit them from one of the above sites with a link through this page and make a purchase, a portion of the sales goes to supporting Must Contain Minis at no extra cost to you.