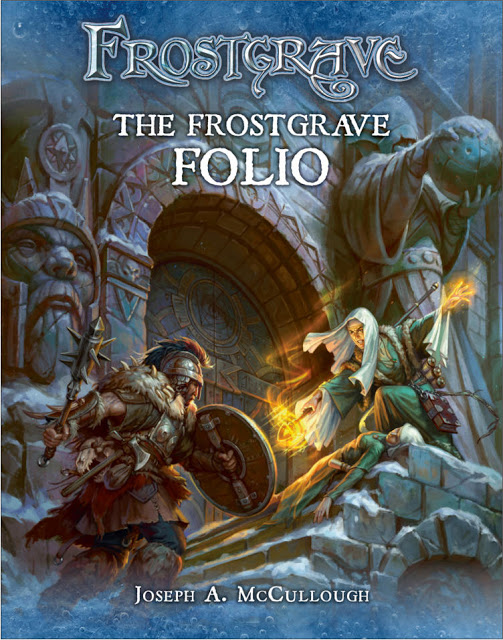 January 31st (2017) is the first day of North Star Military Figures’ Nickstarter for the Frostgrave Folio. This is basically a pre-order system akin to how many companies use Kickstarter. The more units sold, the more “freebies” backers get for supporting the project. This campaign runs until March 1st (2017).

The Folio itself contains all four of the previously released PDF mini-expansions for Frostgrave as well as a new supplement called The Ravages of Time. All four of the previously released mini-expansions have already been reviewed on this website. Below are links to those reviews for people interested in exploring what we already know is in the book.

To encourage people to pre-order the book through North Star Military Figures, they are offering a number of small bonuses through their Nickstarter. The first of which is that they will give away a plastic Barbarian Sprue with every book if they sell 100 or more copies.
If they sell 250 or more books, they will give all backers a metal head and mace to convert one of the plastic Barbarians.
This next reward is the one that I really want. If North Star sells more than 400 books through this Kickstarter, they will add in their new female Sigilist Wizard to all backers. Check this model out. She is beautiful!
North Star is also making available some previously unreleased minis during this Campaign. Below are two minis that can be purchased through the Nickstarter.
North Star is also running a draw for backers. For any backer that supports the campaign during the first week, they will be entered into a draw to choose one of the four plastic Frostgrave miniatures boxes as a prize. If I won, I would choose the Gnolls or the Soldiers because I have copies of the other two boxes.
Thank you for reading this quick Frostgrave Article. I have backed this project and am looking forward to receiving the book and hopefully some freebies. Be sure to visit the Nickstarter Campaign page and back the release if you are interested.
Until next time, Happy Gaming Everyone!!!
[amazon_link asins=’1472818504,1472816242,1472896270,1472805046,1472824016,1472832671,1472814096,1472824008′ template=’ProductCarousel’ store=’mustcontainmi-20′ marketplace=’US’ link_id=’118b0e5b-8e25-11e8-92c2-e72ed3894fbd’]