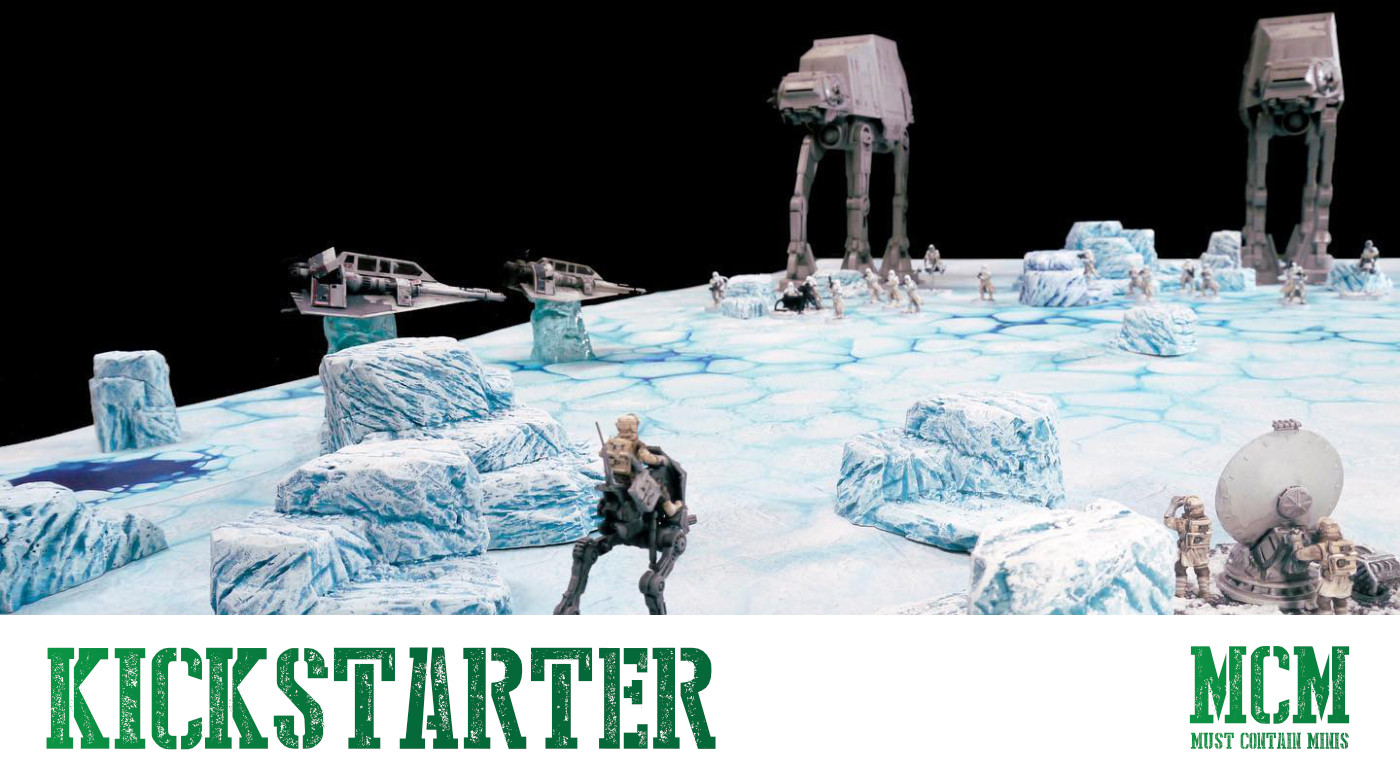 Monster Fight Club takes to Kickstarter with a new project called Monster Scenery: Ice Wilds. This upcoming Kickstarter features new winter gaming mats, frozen pre-painted terrain and potentially more. If you have a miniatures game in a winter setting, this might be for you.

One of the best things about terrain is that you can you can use it across multiple sets of rules. For people like me that dabble in many games, this is just perfect. That said, if you have just one game system that you play terrain still comes in just as handy. Terrain doesn’t care what games you play. It just makes your gaming table look better.

So far we don’t know too much about the Ice Wilds campaign. We know that Monster Fight Club moves to Kickstarter with this project starting on September 22 (2020). The company also shared a few preview images of what we might expect. I share those images here with you.

As a note, all of the images in this post come from the Monster Fight Club Facebook Page.

When I first saw that ice table recreation of Hoth above, I couldn’t help but think that Star Wars Legion guys are going to love this terrain. Heck, I think it looks awesome! That said, my immediate thoughts of where to use this terrain with is the brand new edition of Frostgrave.

I am sure that this terrain set will work with many games sized 28mm up to 35mm. I think the guys at Monster Fight Club feel the same way. They pictured their terrain with a number of figures for scale comparison and display purposes.

So far, I love the preview images. This stuff looks amazing.

Monster Fight Club brings a lot of experience to the table in their projects. This is not their first Kickstarter project. They’ve already delivered a project home and sell terrain both online and on the retail market. The owner also used to be heavily involved in Gale Force Nine and their terrain products.

To give me a chance to make up my own mind about the products, Monster Fight Club was kind enough to send me some terrain for review. They sent their previous kickstarter products, but I expect we will see the same level of quality in this Kickstarter. I plan to publish reviews of these products this week and into the weeks to come.

Back to the Kickstarter at hand – Monster Scenery: Ice Wilds brings new terrain to the tabletop. Amongst that scenery, you will find pine trees.

Some of the products in the Ice Wilds Kickstarter look like a reskinning of their current lines to fit a winter aesthetic. Nothing wrong with that, but Monster Fight Club also brings new terrain to campaign. Among the new terrain, you will find these pine trees.

Those trees look really cool and would certainly look appealing on the gaming table.

This post shares just a taste of what Monster Fight Club plans to bring to the Monster Terrain: Ice Wilds Kickstarter on September 22nd (2020). I look forward watching this campaign unfold.

If this is up your alley, make sure you check out the project once the campaign goes live. You can also check out the stories past and future about Monster Fight Club here on Must Contain Minis.

The Silver Bayonet – A Surprise From Osprey Games