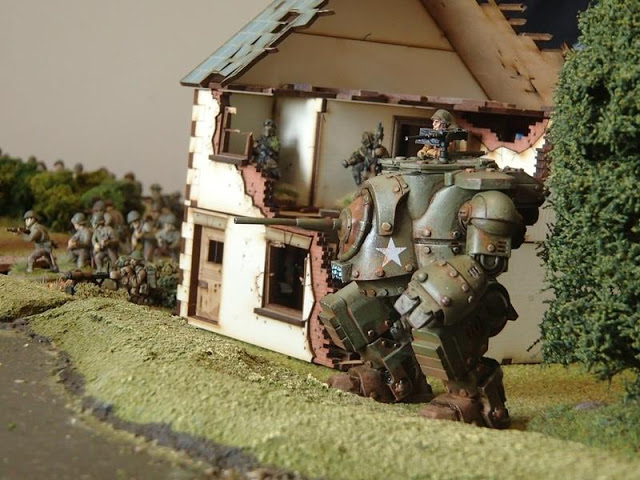 Recently my copy of Band of Brothers, came into my FLGS. After picking it up, I found myself wondering how I could best build the Americans in that box for Konflikt ’47. There is a suggested build in the box, but I have been playing Bolt Action for a while and am thinking of building the box differently.

Thematically, I want something fast and elite for my Airborne American forces. This platoon would be very light with nothing heavier than a light howitzer. That means that a force like the one pictured above would not be what I am running. Likewise, the absolute coolest looking Mech in the game is the Kodiak Close Assault Walker (pictured on the left below), but that Mech would not be running in my list.

While I am happy with the contents of the Band of Brothers Box Set, I was a little disappointed that it didn’t come with any Bazookas or Light Mortars for my troops. Had there of been Bazookas, my initial list would be different. There was a pleasant surprise in the box though. The box comes with enough weapon options to build up to 4 MMG teams. That is pretty cool!!!

Instead of building just one MMG team as the box suggests, I am thinking of maxing out the MMG teams by building three. This will leave me with fewer men in my infantry squads, but I am used to running smaller squads because I run my British troops in Bren Carriers anyhow. The first 605 points of the platoon may be built as follows by using just the contents from Band of Brothers.

This set up will give me a base with lots of small arms. One discrepancy that I found between Konflikt ’47 and Bolt Action 2 is that in Konflikt ’47, the paratrooper squad may take up to one BAR and one LMG. In Bolt Action 2, the same unit cannot take a LMG but can take up to two BARs. Something else odd with BA2 is that in the box there is a slip of paper with the stats for a US Paratrooper Squad (Late War). The stats on that slip of paper and what is in the book don’t match up. I am guessing that is that the piece of paper is a preview of what is in the American Army Book. On the paper, Paratrooper Squads may take one BAR and one LMG. To keep it consistent, I made it so that the squad took one BAR and no LMGs in the above list. Instead, the platoon would rely on the support provided by the MMG teams.

Units in Konflikt ’47 that I believe fit the theme well of an American air dropped infantry platoon include Firefly Jump Infantry, the Jackal Light Walker and the Mudskipper Jump Walker. The Jump infantry are nice in that they are an assault squad with the flight ability. By the looks of them, they look well equipped for jumping out of planes. The Jackal is a walker with the Jump ability and the Mudskipper is a larger mech with the ability of flight. I am theorizing that either of those walkers could be dropped from a plane without fear of damage.

The theme of having the American Mudskipper and Fireflies paired fits together so well that it was used as the cover image on Konflikt ’47.

To flesh out the above list with the Firefly Jump Troops and a Mudskipper, it requires one of the MMG teams being dropped. Below is what I came up with while drafting a 1000 point Konflikt ’47 army.

By following this list, I can get all into Konflikt ’47 by buying just two boxes (Fireflies and Mudskipper) after owning the Band of Brothers Starter box. The Bazooka option was taken for the Mudskipper to give the platoon some ranged Anti-tank power.
Thematically, I like the list above; however, that list is not what I dreamt about before buying the Band of Brothers Boxed Set. No, the Americans that I hoped to build are fast, agile and packing anti-tank power while maintaining mobility. One thing that kind of fire power requires is a Bazooka. Fortunately, I have a friend with a Bazooka in his bits box so I might be able to model an anti-tank team off that. I also have the iconic image in my head of a 75mm Howitzer being fired off in the background when I think of American paratroopers, so I will include one of those too. Below is the list that I might take for Bolt Action 2 (or Konflikt ’47) by adding a few elements to the starter box.

To construct the above list, I would have to buy a Heavy Machine Gun Team and Howitzer to go with the contents of my Band of Brothers Starter Box. Together, these three items would come up to 744 points. The idea is that all infantry would have anti-tank grenades to keep tanks at bay while having the Bazooka team around to actually hunt tanks. The 12 man squad is big enough that it should be a threat to any vehicle. That 12 man squad would act as an assault unit while the 6 man squad would provide covering fire from a distance. To flesh out this list, I could add a box of American Paratroopers (and maybe a medium mortar team) to get the force to a 1000 point level to be used in either Bolt Action 2 or Konflikt ’47 as a historically based platoon.

Since this is an article about Konflikt ’47, I might as well finish with what weird unit I would add to the 744 points above to get to a 1000 points. That unit would likely be a Mudskipper. That walker will bring this list up to 984 points.

Below is the American list that I would want to take into Konflikt ’47 if I complete the army.

The Original Concept plus a Mudskipper (984 Points)

I think that the above list would be a lot of fun to play. Thematically, it fits the image in my mind – an army that could be entirely air dropped into a battle zone. It has tons of small arms, some heavier weapons and a Mech for support. There is also enough room that if I wanted to add another man to a squad, I could (it would just take another purchase to get that figure). How would you build your American forces for Konflikt ’47?
Before signing out, I would like to give a big shout out to Osprey Publishing. Thank you so much for sending me Konflikt ’47. I am having a blast looking through the book and designing army lists.