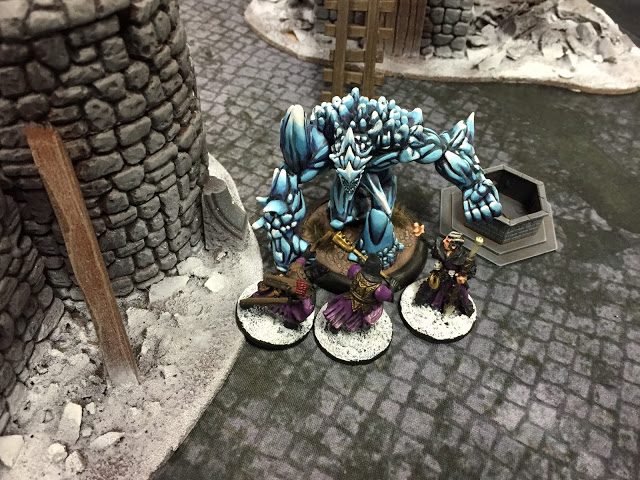 I finally finished painting up my Frostgrave Cultists and got in my first game of Frostgrave. Just like the first time that I played X-Wing, my first game of Frostgrave happened at a Tournament. For me, playing Frostgrave in a tournament setting is a bit of an odd thing because it seems more like a casual “beer and pretzels” sort of game. I believe the tournament organizers feel the same way and for that reason referred to the event as a Campaign Day. I am really happy that they held the Campaign day and thoroughly enjoyed myself. The campaign that we played through was the one in Hunt for the Golem. My Warband contained a Necromancer as its Wizard and also employed a Captain throughout the entire game.

I was very impressed with the Lords of War Tournament Day. One thing that is really cool, is just the number of games that they had running at the Tournament. On day one, the organizers ran Age of Sigmar, Infinity and Guild Ball. On day two, they ran Horus Heresy, Malifaux and Frostgrave. I was there only on day two because I went for Frostgave.

At my usual gaming location, Forbes Hobbies in Cambridge (Ontario, Canada), I am used to a large amount of Terrain. Normally I play Flames of War, Bolt Action and other games that require lots of terrain. When I arrived to the tournament my jaw dropped because I saw the following tables…

Soon, my fears were answered. I had arrived to the tournament early and after some time, I was relieved to see them setting up the following two tables. This is more like the tables on which I am used to playing. I was ecstatic to see tables denser in terrain. It turns out that the tables I was looking at earlier were for Malifaux.

My opponent for the campaign was Jordan. He brought a Chronomancer who really liked to cast elemental spells. His Warband was painted by Ash of Guerrilla Miniature Games. The two things that I found most enjoyable about Frostgrave today were the stories that developed as we played and leveling up the Wizards between games.

Although I won my first and second games, my Captain ended up going down below 0 health both times with just a single kill. She was not proving her worth. Nevertheless, I kept her around.

For the second game, I set up as follows…

The Thieves, Construct and Zombie all captured treasure and took it off the board. Fog was advantageous again, but my opponent discovered Mind Control and started to turn my own soldiers against me. This was super deadly and one of my opponents top soldiers was actually my Marksman.

Miraculously, I won this game, but that is because I was able to direct the Golem around by using Fog to block its line of sight. Not being able to see my guys, the Golem went after my opponent and easily killed two of his soldiers without me even having to engage.

In the next game, the Golem would not help my side out so much. In fact, I ended up in combat with the Golem very quickly and had to rush the Wizard into hand-to-hand combat in order to save the other two soldiers. The Templar died, but the Ranger was saved and my Wizard managed to kill the Golem with his two weapons. Throughout the campaign, I had been upgrading my Wizard’s fight skill so by this point he was a +5 (includes modification from two weapons) in combat.

My opponent won this match as my guys were badly wounded from the battle with the Golem and I had to flee my Wizard off the board to prevent an easy kill. My Captain stuck around and was able to take out the enemy’s apprentice.

I had a great time at this event and would like to thank the organizers for running the event. Below is a picture of the swag that they gave for attending and under that is a picture of my award for bringing the “Best Performing Warband” to the event.

Below are a few more pictures of the miniatures that I brought to the event.

Finally, below is a picture of my entire Warband for the tournament. There are a large number of figures because I brought many options to use between games. A typical Frostgrave game will have 10 figures to each side. My Wizard finished the campaign at level 7. 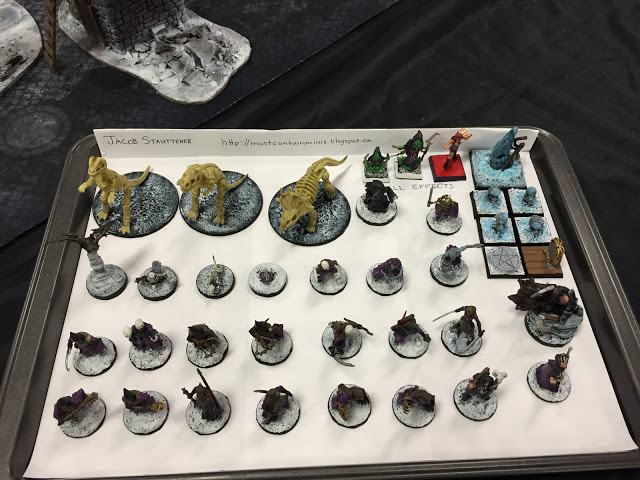 I hope that you enjoyed my post. For posts coming up, I plan to do a post of my thoughts of Frostgrave as a review and then I will likely be switching over to Bolt Action for a while.