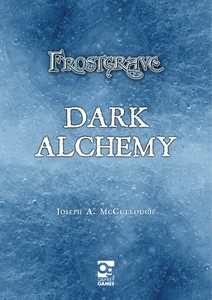 Frostgrave: Dark Alchemy is a mini-online expansion that is currently available digitally and will be a part of the Frostgrave Folio, a printed book due out in March (2017). I bought my copy directly through Osprey Publishing’s Website.

Of the four Frostgrave – Mini Expansions, Dark Alchemy would be my second favourite. My favourite is Sellsword. The reason that these two are my favourites is because of the new optional rules that the supplements bring to the game. These extra rules are great to use across all of Frostgrave and have life outside of the campaigns in the pdf expansions.

The big thing that Dark Alchemy brings to the game is a complete overhaul of the Potion Brewing system as well as new charts for rolling found potions. This book makes brewing potions between games a little more complex in a good way. It brings into play “Greater Potions,” which are more rare and require resources to brew. I think these new rules add a lot to the game and I would recommend this supplement to anyone with a Wizard that brews potions.

Outside of the rules changes, this supplement also contains a mini-campaign with three scenarios to play through. What is really neat is that these missions are made for solo play. Two players can play, but as an alliance (cooperatively). This type of play I really like. The treasure table for these missions does yield less reward than standard games of Frostgrave, but that is okay. There are also some small rule twists for the campaign (such as changes to out of game spells, available soldiers per scenario and the addition of spawning creatures).

Overall, I really like this expansion and I think it is a great addition to the Frostgrave game.


The best way to get the Dark Alchemy is through the Frostgrave: Folio book. It is also still available through various online services such as DriveThruRPG.

Why I Love Playing Bolt Action