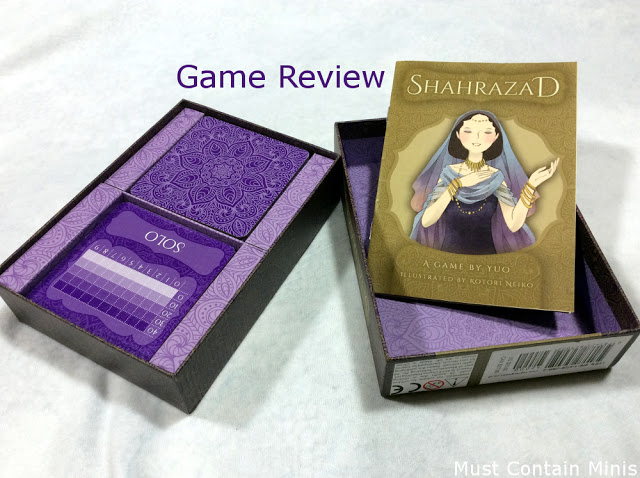 This post is Must Contain Minis’ first review of a non-miniatures game. The game comes from Osprey Games and I am more than happy to offer my opinion of their product.

The game sent was Shahrazad. This is certainly not my normal type of game. Generally, I prefer more complex games, dripping with theme. Although Sharazad is themed, it is much more abstract than what normally hits my table.

The game is also very simple and has a feel of a randomized puzzle. The flip side about the game being simple is that more people (gamers and non-gamers) are generally willing to play the game (or at least give it a try).

In this game, players play the part of Shahrazad – a woman who must tell the King a fantastic story in order to survive the night. Once Shahrazad tells her first tale, the king demands a second story. This is done by playing a second time.

As far as theme goes, this scenario description and the lovely artwork on the tiles is as far as the game goes. The rest of the game consists of tile lying in a fashion to organize colours and numbers.

The game works as either a one or two player game and takes roughly 10 to 20 minutes to play through.

When Shahrazad arrived, my wife and I opened the box and immediately started playing our own version of the game. In exploring the components, we drew two tiles at a time, looked at them and tried to tell an interesting story pairing the words and pictures on the tiles with the other tiles. We had no idea that drawing two tiles and playing like this is similar to how the game actually plays.

To play, one places a single tile in the middle of the table. That tile is the starting point.

From there, Players place one tile (from their hand) at a time to join the tiles in a pattern. The tiles may be laid right above or below a tile or beside and slightly above (or slightly below) another tile. There is certainly a “puzzle” type of feel to this action. Below shows a picture of how the table looked once I laid all of my tiles.

This game was not my first play through. I thought that I had the strategy figured out. Clearly, as indicated by the score, I had not.

After failing to score 10 (or above), I did exactly what the rules state. I started the game over again. This time, I did much better.

After the first game (so long as the score was above 10), the flipped over tiles get removed and a second round is played. No tiles were flipped so no tiles were removed from play.

After the second round, add the scores together and that is the final score of the game.

The two rounds together took me just over 10 minutes to play. With two players, the game is cooperative and the game play is very similar to the solo version.

Shahrazad is a fun little game with quality components. The tiles are nice and everyone that has played has commented on how they really like the artwork.

The game mechanics are really simple and it is an easy game to teach. Theme is present, but felt tacked on. I would consider Shahrazad a pleasant abstract tile laying game. The story related pictures on the tiles are lovely, but I didn’t feel like I was telling a story as I played. Instead, the game felt more like solving a puzzle of sorts.

That said, one could tell a story piece-by-piece while laying the tiles. By doing so, I am sure that the game might feel more thematic.

For me, the game played best as a solitaire game. It works well with two players, but I liked how much faster it played when it was just me.

I could imagine parents making this game something special with kids by having each player tell a sentence or two of a story each time a tile is laid.

While the game features no miniatures, it will remain in my collection. Shahrazad is a quick and fun game that would be perfect for when one or two people have 10 to 20 minutes to spare – perhaps between other games with miniatures in them.

Discloser: Osprey Publishing provided Must Contain Minis with a Review Copy of Shahrazad.


Must Contain Minis is a participant in the Amazon Services LLC Associates Program, an affiliate advertising program designed to provide a means for sites to earn advertising fees by advertising and linking to Amazon.