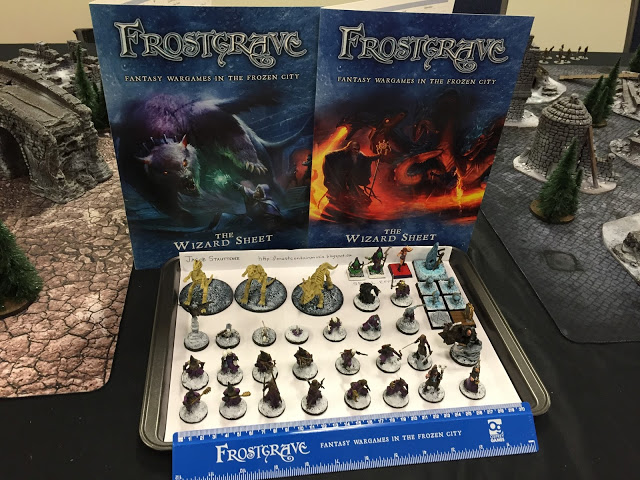 There are plenty of Blogs, Videos and Articles out there already that offer content reviews of Frostgrave. Some even go Chapter by Chapter showing you what is in the book. This will not be that type of review. Instead, this is a general review of my thoughts and feelings on the game after playing through The Hunt for the Golem Campaign.

The rules are fairly simple and that is a large part of the game’s charm. Pretty much all you need to refer to while playing is on the Quick Reference Sheet that can be downloaded from Opsrey Publishing. There were a few small items that had us flipping through our rulebooks, but considering both my opponent and I were brand new players, this game is easy to grasp and play.

The real beauty of the game for me was getting to improve your Wizard and Warband between games. Buying items for the base, selecting spells and stats to improve and hiring soldiers for your Warband was a very exciting aspect of the game for me. My wizard improved 2 to 3 levels a game and brought in lots of gold, so there were lots choices to make before the next round. Even in a bad game, it is likely that your wizard will increase a full level (unless you do exceedingly bad or lose your Wizard to an injury). I really liked that it is only your Wizard, Apprentice and Captain that improve between plays so record keeping is less than it would be in games like Mordheim and Necromunda.

For a simple game, it creates a healthy amount of tension. I was terrified of elemental spells and ranged attacks on my Wizard so I used a great deal of Fog in my games. This strategy worked well for my Warband. One thing that I have seen people complain about in the reviews is the d20 system and how “swingy” that can make the game. There is truth to that complaint, but the way I look at it is that it is a game and the d20 adds a higher luck element. Luck is the best equalizer out there that can help non-skilled players play an enjoyable game against a skilled opponent. This game is about the stories that are created as you play. You can be really good in your strategy, but if you are rolling low to cast a spell or equally bad in combat, you won’t do well. We played with the “Critical Hit” special rule that auto hits on a natural 20 and doubles your damage. This made combats brutal. With this rule. even a lowly Thug or Javelineer can one shot kill your Wizard. The consequences can be extreme, but I think this luck element is a good thing. It helps if you want to play the game casually, play it with kids or just simply run a quick demo game. It also levels the playing field between Wizards of different levels. Furthermore, I think the d20 aspect makes the game more inviting to Dungeons and Dragons players, and if we are lucky, will get those D&D players interested into miniatures. I could understand why tournament players would complain about this, but I am okay with it.

An observation that I would like to point out is that the modifiers are not as helpful as they might seem in this game. When you compare a +2 attack Thug to a +4 attack Treasure Hunter, the extra chance to hit your opponent is not that significant. I am not a statistician, so please bare with me and my simple math. When rolling a d20, there are 20 different possibilities to roll so that would mean that there is a 5% chance that you would roll any number on that die. Being that there is a 5% chance for each number, each +1 improves your outcome by 5%. So when you match up your +2 soldier against a +4 soldier, the +4 soldier is only 10% more likely to win the combat than you are. Because of the small boosts, we found situations where a creature should have no chance, but it ended up doing extremely well. In our first game, we had a Warhound (+1 Fight) consistently winning battles while surrounded by 3 soldiers with the following bonuses (Javelineer +6, Thief +5, Captain +7 [base numbers plus support bonus]). During my turn I initiated combat with the Javelineer – he lost and died to the dog. Then I initiated with the Thief – no effect. Finally I initiated combat with my Captain – she also lost and died to the dog. At that point I think we ‘accidently’ created our own house rule that we consistently followed for the rest of the tournament.

We ruled that the Dog should not have been able to kill all the combatants when it was ganged up on so badly and decided that each creature could be attacked in melee only once per round and anyone surrounding the figure was there to give support (they did not get their attacks). I think they should have gotten their attacks. On page 36 of the rulebook for Multiple Combats, it is not clear to me whether all characters get their attacks when they surround their opponents. I think that they do and it was just my bad luck that made us step back and think that we had to be playing the rules wrong. If you know the answer to this question, please post a response in the comments section.

Since we were consistent with the rule and we agreed to it, I am not too worried on whether we played it right or wrong, but I would like to play it correctly going forward. Aside from our question on multiple combatants, the rules are easy to follow, quick to play [I think we were 45 to 90 minutes a game] and an extreme value at $20 to $30 Canadian depending on where you buy them. I bought my Cultist Warband Boxed Set, Necromancer and the base rules for around $70 Canadian. This game is worth the buy.

The publishers of this game are also fine with you using other companies models. That is always a plus for me. The Warband at the start of this post is made mostly from official North Star Frostgrave Miniatures, while my Warband below is made mostly of Reaper and RAFM models.

Joseph McCullough and Osprey Publishing have some really cool expansions coming that I would love to get my hands on and review at some point. The next two images are from Joseph’s Blog The Renaissance Troll.

Thank you for reading and please feel free to leave a comment.

If you want to check out Frostgrave for yourself, head on over to DriveThruRPG and buy the PDF or check out Amazon for the Book.