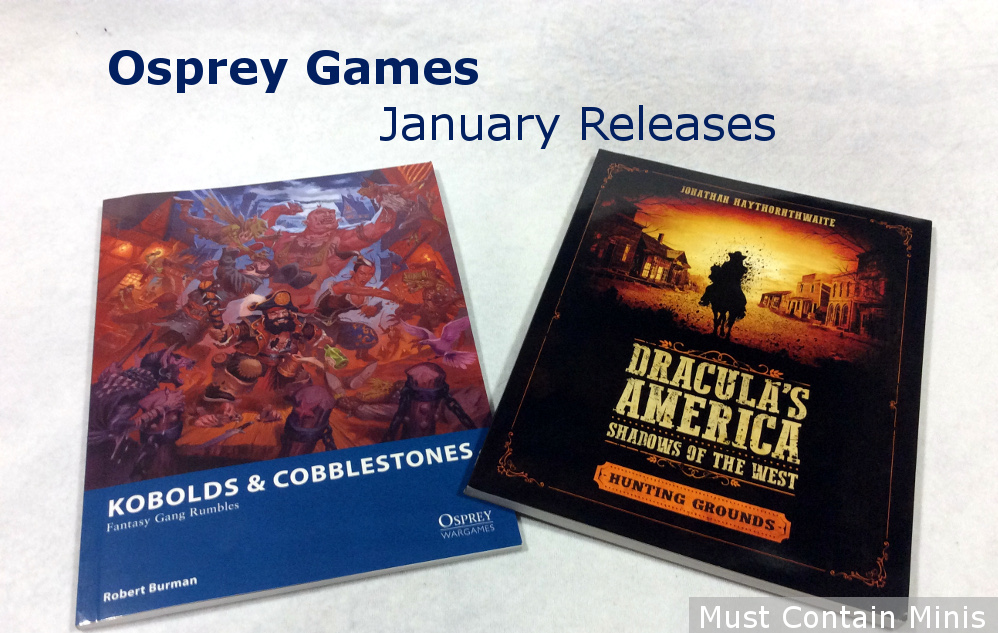 Just a week or so ago, I received in the mail Advanced Copies of Dracula’s America: Shadows of the West: Hunting Grounds and Kobolds & Cobblestones from Opsrey Games. A big “Thank You” goes out to Osprey Games for sending me these products.

Dracula’s America: Shadows of the West: Hunting Grounds comes across as extremely well done. I have not fully read through it, but I have flipped through it a few times and read several select pages.

The artwork is amazing and the pictures of miniatures are really nice. In fact, I liked the artwork and pictures so much that I was compelled to take a look at the original book for comparison purposes. The art in the Core Rulebook is nice, but the art in Hunting Grounds is amazing. I can’t wait to see what is in the next expansion to this game.

Within the book are a couple of new factions, rules for taking and holding territories, and new campaign options. Within the territories section, there are also rules to give your gang special benefits based on where you place your hideout (base). In flipping through this book, I felt the urge to try this game even though I have no related miniatures. I will be keeping an eye out for it at the conventions this year to see if I can get a chance to try it there.

This supplement for Dracula’s America: Shadows of the West contains a host of new rules and material and offers something for every player.

– Two New Factions: The Forsaken, ragged survivors of the 7th Cavalry tormented by a bestial curse, and the Shadow Dragon Tong, crimelords with an agenda as mysterious as the powers wielded by their enforcers.
– The Hunting Grounds: Scenarios and encounters that focus on this mythical realm and the power and threats found within it.
– Territory: Build and develop your headquarters, and exploit the benefits it offers, but beware your enemies taking the fight to your home turf.
– Outlaws, Mercenaries and Bounty Hunters: New campaign options, allowing you to turn to a life of crime, bring in wanted fugitives, or sell your gun to the highest bidder.
– New Monsters: The denizens of the Hunting Grounds, in all their terrifying glory.
– New Hired Guns: There’s all kinds of folk willing to sell their skills, and these new Hired Guns offer a range of tactical options… if you can afford them.
– New Gear: Bring a Gatling Gun to a knife fight, or find out why you were always warned about misusing brimstone chalk and vials of ectoplasm.
– New Skills: Riding and Leadership skills give you new combat options and help your posse stay in the fight.

If you are interested in the book, it is available through both Osprey Games and Amazon.

Kobolds & Cobblestones is an interesting game where you play as a gang trying to gain control of a criminal world. Don’t buy this thinking that you are going to get something along the lines of Frostgrave or Mordhiem. This game is very different. It runs off of a card mechanic rather than dice. It also allows all players to hire characters of any race or type. In some ways, that may be more fair as things are less as asymmetrical, but it also leads to a different kind of feel for the game. You are not limited based on the Boss you select for your gang.

The artwork in this book is okay and the game certainly feels different than others that I have tried. There is no need for a tape measure. Movement is done with cards by measuring using the width or length of a playing card (which is based on the speed of your figure). Combat is resolved by the players playing poker against each other. Magic is played out through a game of Blackjack. These are interesting mechanics, but mechanics of which I am completely unfamiliar.

I would recommend this game to people looking for a new way to play with their fantasy miniatures and to people that like the idea of combining Miniatures Games with Card Games. As this is a Blue Series book, it is a very affordable game to purchase.

Kobolds & Cobblestones is a skirmish wargame for rumbles between gangs in the city of Ordinsport’s seedy underbelly. Players hire gangs of criminals, thugs and enforcers from a number of classic Fantasy races, and attempt to take control of the underworld and establish themselves as the city’s kingpins. Playing card-based mechanics and a cunning bribery element keep players on their toes, as a one-sided battle can turn around in a flash.

If you are interested in the book, it is available through both Osprey Games and Amazon.

Reminder: Council Fires 2016 is this Weekend!!!