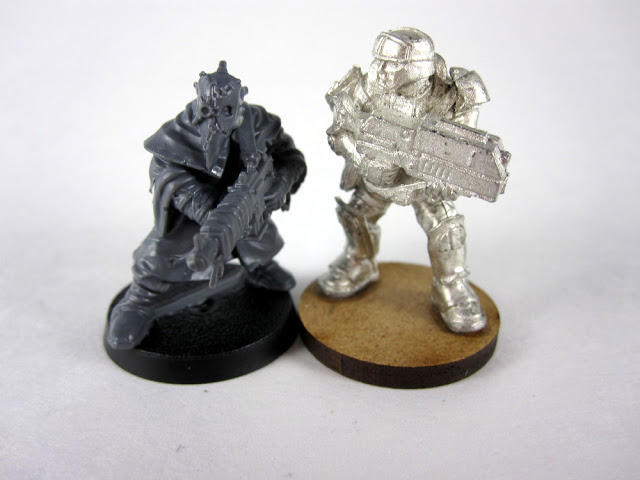 With the upcoming release of Rogue Stars I find myself working on miniatures to prep for that game. While North Star Military Figures has the official figures, I decided to work with what I have.

Like any game that I collect, I like to have two forces for the game. Oddly enough, in my celebration post of six months of Blogging, I posed the question of whether I would ever work with the products from one of the bigger companies. Well, tonight I am.

For one side, I will be using GW Chaos Cultists. These models are quite economical as they come in a 5-pack for $12 Canadian. You won’t hear me say this much about the big company, but these figures are a good value for the price.

For an opposing force, I will be using a collection of Reaper and RAFM Miniatures. Now some of these figures, my readers will have already seen in my comparison post between GW and Six Squared Studios Bases. Here, all of my GW figures are on the bases that came with them while all of the Reaper and RAFM Miniatures are on bases by Six Squared Studios.

The Reaper and RAFM models will fill a crew as Merchants while the Cultists will represent Space Pirates. Now lets take a look at these models.

To be honest, I think I have more figures than points will allow, but there is nothing wrong with building a crew with options.  🙂

Also on the paint table are the Highland Infantry that I bought from Crucible Crush.