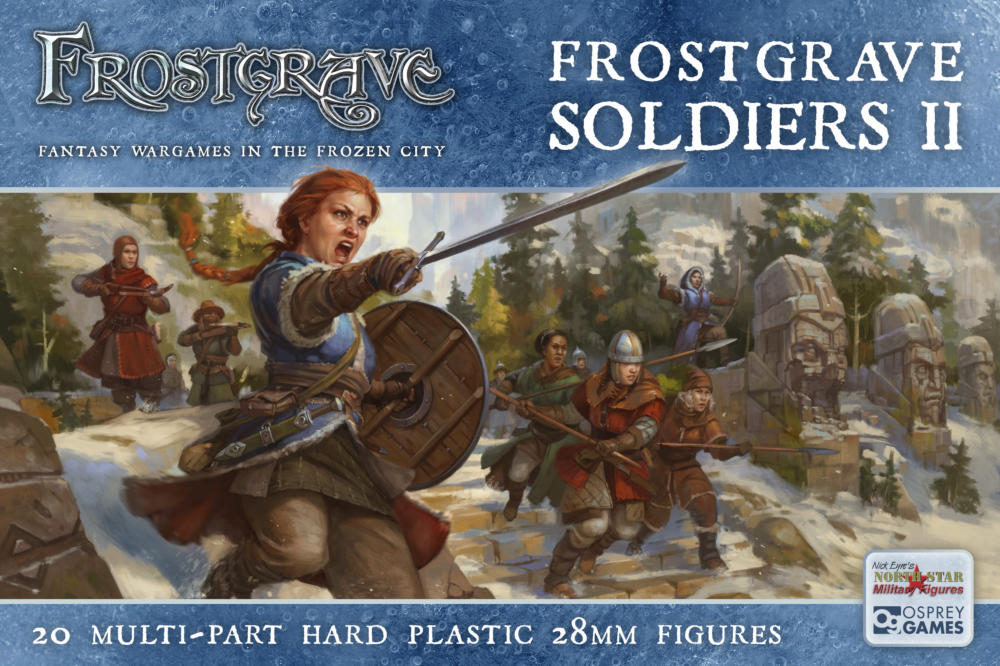 North Star Military Figures and Osprey Games teamed up again to produce an excellent looking miniatures set. This time, they are offering a boxed set of female soldier miniatures for Frostgrave. These miniatures look excellent. Also available are a number of other miniatures through North Star’s most recent Nickstarter.

Today’s post is meant to raise awareness of the current Frostgrave Nickstarter for anyone that wants to participate.

I consider these miniatures the highlight of the current Nickstarter. Have you ever had your wife, mother, sister, niece or anyone else close to you ask why your female miniatures tend to be so scantily clad? I remember years ago my niece wanted to paint miniatures and it was a little disappointing to her that there were so few miniatures geared towards her. Annie of Bad Squiddo Games tries to tackle this very problem with her webstore, but now North Star and Osprey are producing their own appropriately clothed female miniatures.

If you have a significant woman (or girl) in your life and they want to get into miniatures, check these figures out. I am sure my niece would have been very happy with these when she was younger and wanting to paint miniatures.

Even if you don’t have a significant female in your life, these minis are just cool.  🙂

North Star is offering up multiple pledge levels for this Nickstarter. These soldiers come in The Soldiers: Maze of Malcor Deal.

You can also buy just the female soldier box directly from North Star at a slight discount during the Nickstarter.

The Maze of Malcor

North Star and Osprey switched things up for this Kickstarter. They already released The Maze of Malcor book a while ago. I don’t have the book yet myself, but I like what is supposed to be in it – new rules, monsters, and adventures. If you want the book, you can get it as one of the Pledge levels for this Nickstarter. During the Nickstarter, it comes with a free model.

Like all of the other Frostgrave books, this one also adds new monsters. One of the pledge levels gets you the new monsters collection. Which one do you like the most?

The Maze of Malcor also introduces some new schools of magic. There is a pledge level to get just the models of new Wizard types.

If you are either an extreme fan of Frostgrave, a Completionist, or you just really like the offerings this time around, there is also a pledge level to get all of the new items for Frostgrave.

Like the Kickstarter concept that Nickstarter follows, you can get extra rewards if you participate in their pre-ordering program. The image below is one of the unlocked miniatures already available to backers.

There is another model currently unlocked and more to go as participation in the Nickstarter grows.

Hopefully you enjoyed this quick awareness article for the Frostgrave: Maze of Malcor Nickstarter. To me, the figures look excellent and the artwork is amazing.

By, the way, the deals for this Nickstarter are available through North Star Military Figures, Bad Squiddo Games and a number of other companies too. I tend to support North Star directly, but feel free to shop around and see if your preferred vendor is also in on this deal.

Blood & Plunder Expands with Fire on the Frontier