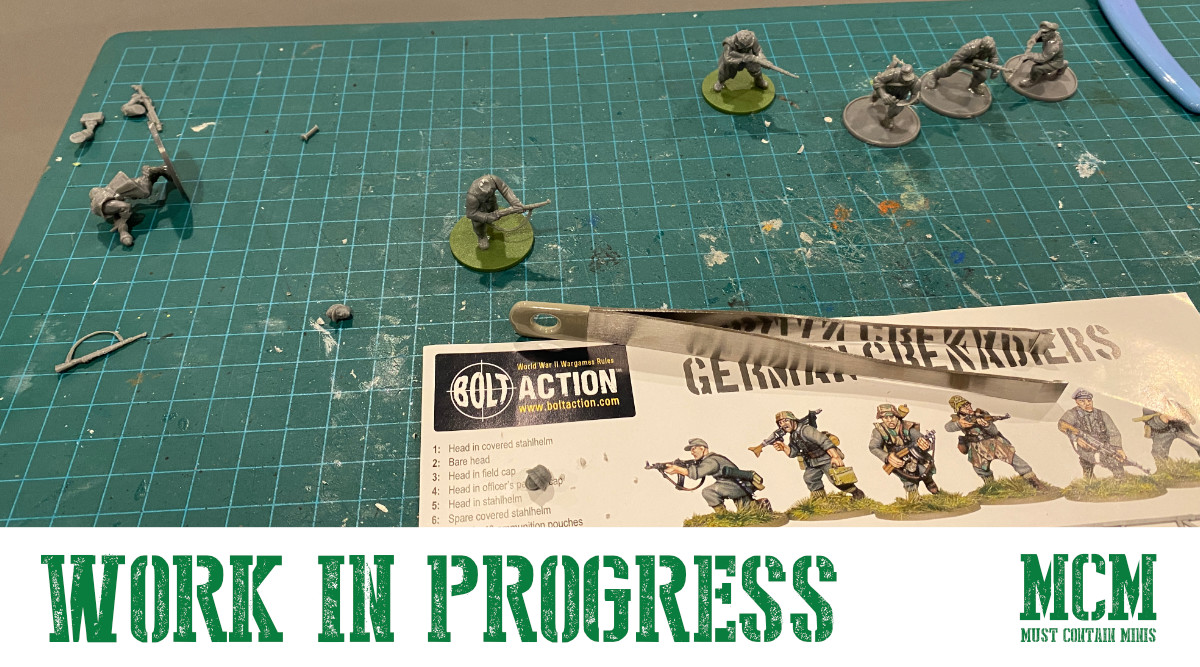 When I first started Must Contain Minis, Bolt Action was a game that I covered a lot. The reason for this is that it is a great game and I like that it is set in World War 2. Recently, I found an extra sprue of German Grenadiers that I had sitting around so I built them!!!

This sprue was a left over from my Bolt Action: Band of Brothers 2 player starter set.

I found building the figures quick and straight forward. On top of that, Warlord Games provides a highly detailed sheet breaking down what is on the sprue.

When I finished the figures, here is how they looked.

Now, let’s take a closer look at each figure.

I like building and taking pictures of miniatures, so let’s take a closer look at these figures by Warlord Games. I lost some of the bases, so I used some green ones from other figures that are the same size as Bolt Action bases.

I found it enjoyable to work with Warlord Games figures again for Bolt Action. This small group of six soldiers will find their home in my small 28mm German Heer Army.

Coming up soon, I have a video where I fit that small army into a Feldherr Mini Plus bag. Oh, if you are interested in an army bag of some sort from them, you can use the Coupon Code BOLT2022 to save 5 Euro off an order of 50 Euro or more.

These figures come from the Band of Brothers Two-Player Starter Set for the game. I have an unboxing of that box here, and it shows all of the sprues that come in there in nice and clear pictures. This box set also made it on my Christmas 2021 suggestions list for people looking for Two Player Starter Sets.

Again, these minis are by Warlord Games. For those curious, I bought mine from Forbes Hobbies in Cambridge, Ontario (Canada). They have a new location in Cambridge that is shaping up to be a really nice space.